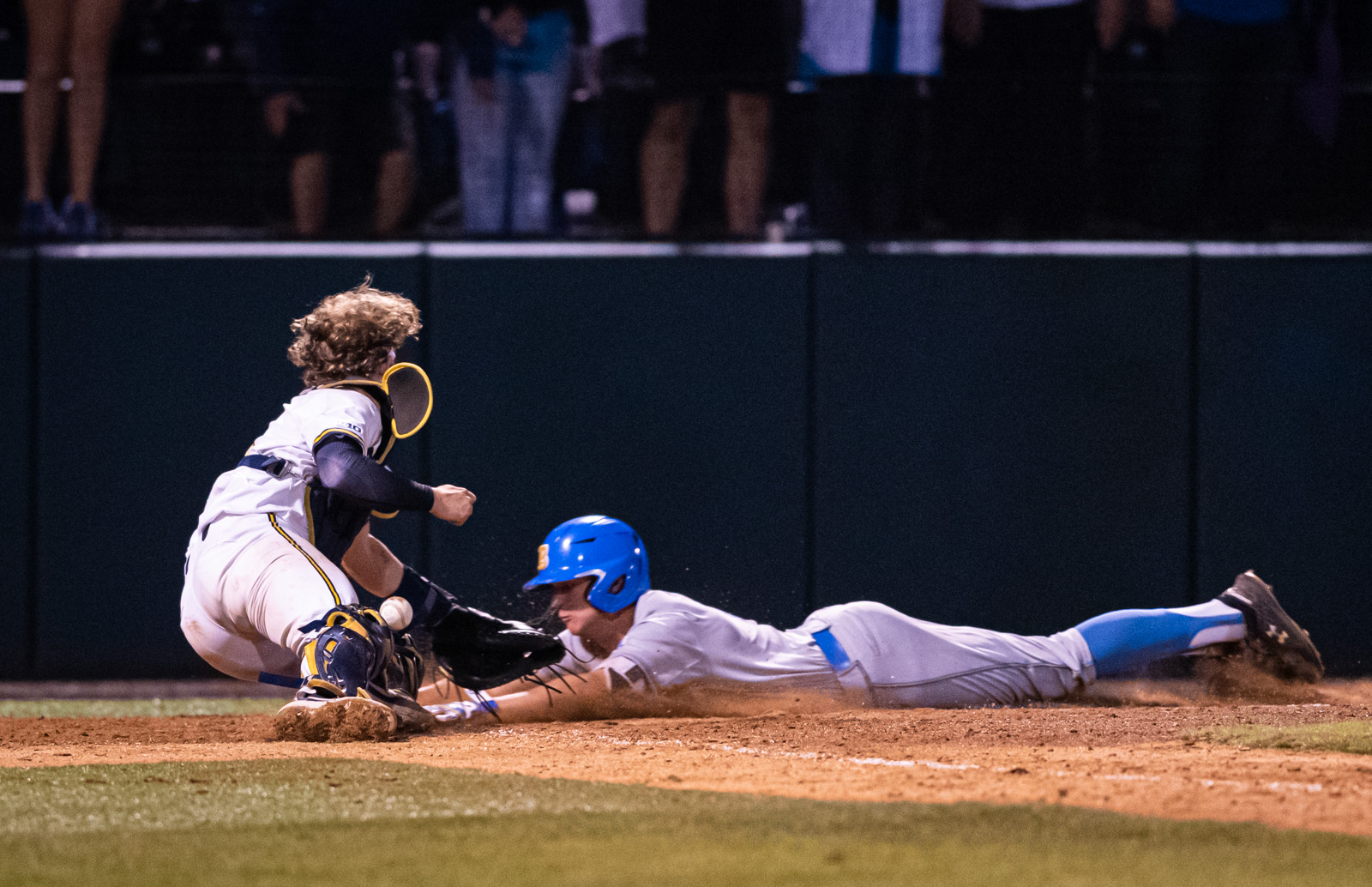 Freshman pinch hitter Jake Moberg reached on an error to lead off the top of the 12th on Saturday night against Michigan. Moberg scored from first on a double to center, giving UCLA baseball a one-run lead. (Isabelle Roy/Daily Bruin senior staff)

The Bruins were six outs from elimination.

But for the fourth straight time, they escaped its grasp.

Freshman infielder Jake Moberg reached base in the top of the 12th when Michigan pitcher Walker Cleveland bobbled the ball – the Wolverine’s fifth error of the game. With one out, Kendall stepped to the plate and ripped a double into the right-center gap to bring in the game-winning run.

“I wasn’t thinking much,” Kendall said. “I probably blacked out. I was just looking for a ball to hit.”

Kendall entered the game as a pinch hitter in the ninth and went 0-for-2 in his first two trips to the plate.

Sophomore right-hander Holden Powell tossed a career-high 77 pitches, going from the eighth through the 11th. He threw five strikeouts in his five full innings of work.

However, the Bruins would not have made it to extras without Toglia.

With UCLA trailing 3-2 in the top of the eighth, Toglia entered the batter’s box to lead off the inning. He tied the game with one swing, launching a solo shot over the left field wall for his 17th home run of the year and UCLA’s first of the series.

The Bruins took a 4-3 lead in the ninth thanks to another Michigan fielding error.

The lead was short-lived, however, as Powell gave up a leadoff double to first baseman Jimmy Kerr – who later scored on a sacrifice fly to tie the game – in the bottom of the ninth. Michigan’s Joe Donovan almost won the game with his second home run of the night, but junior left fielder Jack Stronach caught the ball at the wall to send it to extra innings.

Sophomore right-fielder Garrett Mitchell reached on a throwing error by the second baseman in the 11th, and a medley of errors followed to load the bases twice for the Bruins.

Senior designated hitter Jake Pries hit into a double play at third, leading the Wolverines to intentionally walk Toglia to load the bases again. The gamble paid off, as freshman catcher Noah Cardenas grounded out to second to end the inning.

Overall, the Bruins went 0-for-5 with the bases loaded.

“Credit to our staff and players to keep on competing,” said coach John Savage. “We’re fortunate to come out on top. … You’ve got to tip your hat to both teams for being on the field for five hours and playing for a trip to Omaha.”

Nearly four hours earlier, the Bruins struck in the top of the first after they loaded the bases for Toglia, who drove in a run with a chopper to second to give UCLA its first lead of the series.

Michigan designated hitter Jordan Nwogu led off the bottom of the inning with a double into the left-center gap and came home on back-to-back groundouts to tie the game. The Wolverines went ahead in the next inning on Donovan’s two-run shot over the left field wall – the first homer of the series for either team – off junior right-hander Jack Ralston.

The series finale will start at 6 p.m. on Sunday.