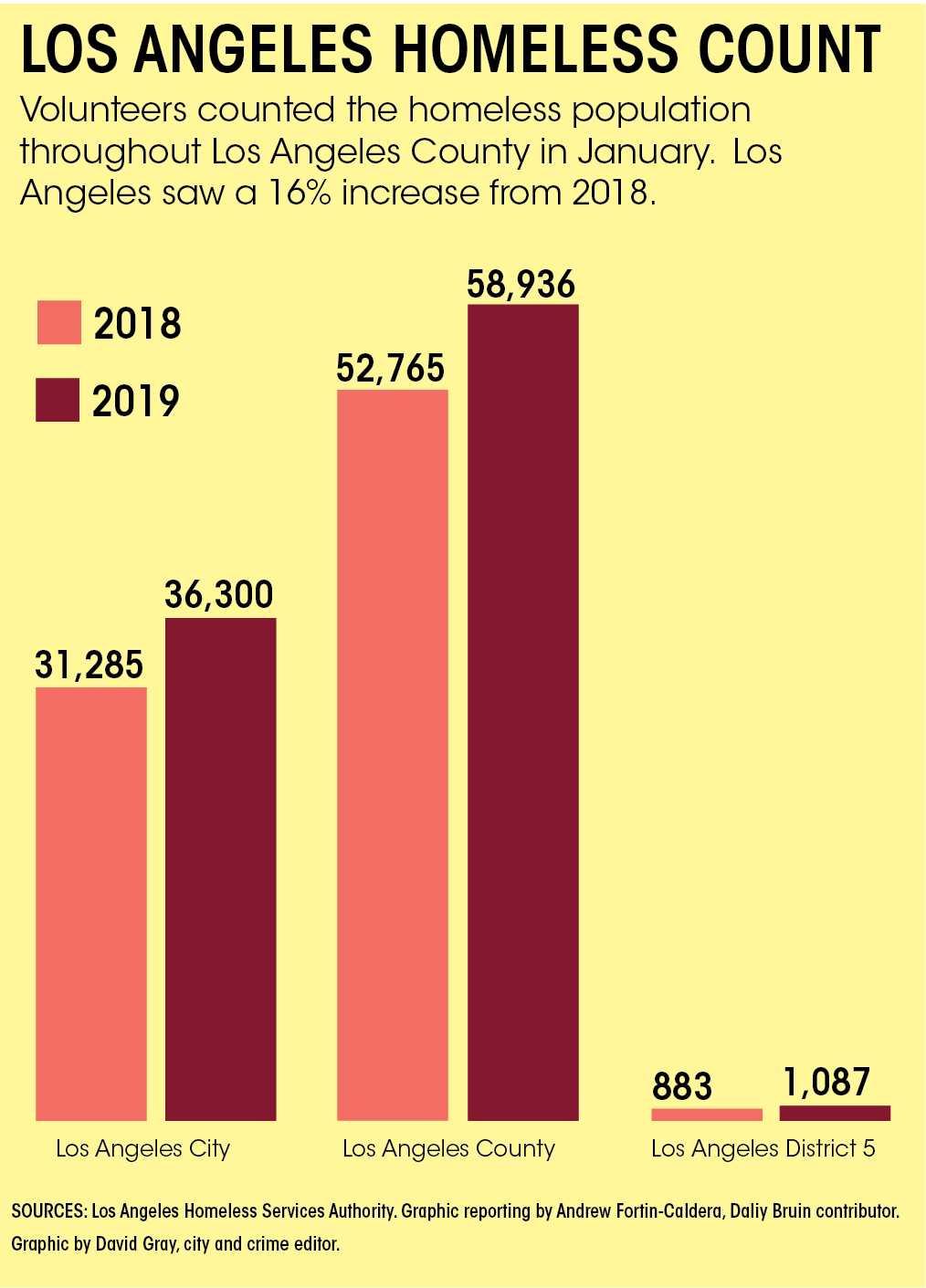 Homelessness in Los Angeles County increased by 12%, according to a report released jointly by the city and county Tuesday.

Volunteers for LAHSA and local partner organizations conducted the annual count late January. Each city district conducts its own count and neighborhood councils within each district combine their tallies for the overall count.

The results show a reversal of most of the progress found in the 2018 report, which recorded the county homeless population decreased by 4% from 2017.

The report showed the greatest increase among the unsheltered homeless population, which grew by almost 5,000 in the county and over 200 in district five.

Sean Wright, a spokesperson for LAHSA, said special teams also survey areas, such as riverbeds, inaccessible to volunteers to ensure the report accounts for all areas covered by the federal census.

The surge in homelessness in LA comes despite recent proposals to combat homelessness, such as Measure H, which county residents passed in 2017 to provide funding for new homeless units and programs. The report showed the homeless population housed in facilities funded by Measure H almost doubled since 2015, with 21,631 people receiving permanent housing placements in 2018.

Another measure, Proposition HHH, passed in November 2016 and allocated $1.2 billion for housing. The city used the funds to build 5,303 new housing units, over 1,000 of which are scheduled to open next year.

Lisa Chapman, president of the Westwood Neighborhood Council and co-chair for the WWNC Homelessness Task Force, said the task force is working on a program modeled after St. Joseph’s Center, a nonprofit organization in Santa Monica, to provide critical services such as psychiatric care and case workers to the homeless in Westwood.

Chapman also said Westwood saw limited benefits from measures creating temporary housing projects because there is no space to build temporary homeless shelters in the neighborhood.

“We’re such a congested area that there’s not a lot of free space to look at for bridge housing,” Chapman said. “People become resigned after being on the street for a long time.”

Chapman that added volunteers for the 2019 count had difficulties making an accurate tally of the homeless population in Westwood.

She said park officials told homeless individuals to leave the Westwood Park on the night of the count, making it difficult for volunteers to keep track of who had been recorded.

The report was initially scheduled for release May 31, but was instead released June 4. Several city organizations advocating for homeless people claimed LAHSA attempted to reduce the impact of the report by delaying its publication.

“The official response on homelessness simply does not correlate to the crisis we face and our elected officials just continue to move at the speed of government,” Weinstein said. “It’s a national disgrace.”

Wright did not respond to questions regarding the delay.

The 2020 Greater Los Angeles Homeless Count is planned for Jan. 21-23. Volunteers can register for the upcoming count on LAHSA’s website.