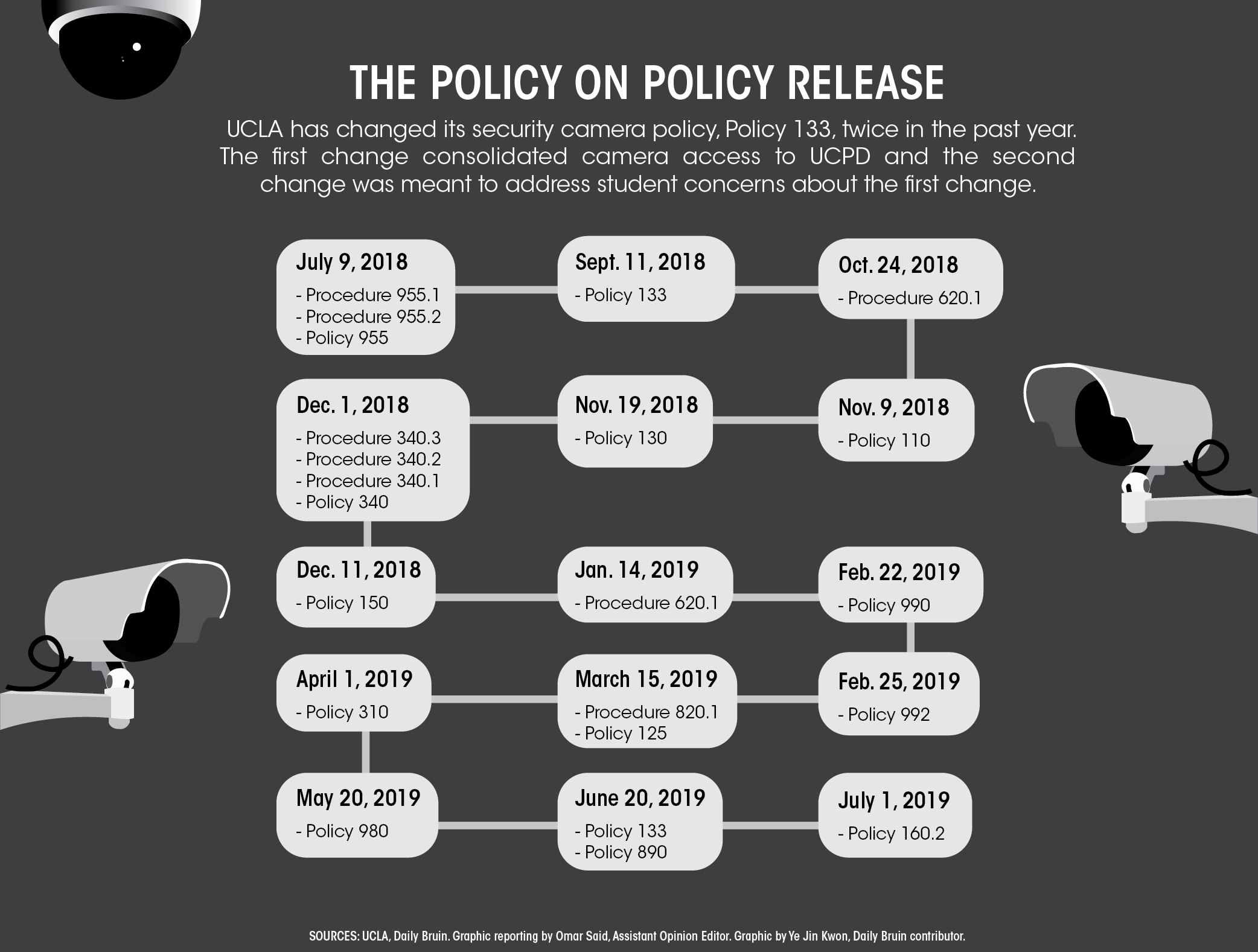 If you’ve ever felt like you’re being watched, you’re probably right – UCLA has eyes all over campus.

There are more than 2,500 security cameras on campus, but no regulations on how they can be used. UCLA Policy 133, introduced in September, sets up centralized guidelines for using these cameras to improve campus safety.

But the policy has drawn criticism. For starters, it allows UCPD access to the footage without having to ask for permission, institutionalizing campus monitoring.

The proposition was first drafted before students came to campus in fall 2018, and prompted backlash from the community soon afterward. The administration then waited more than two quarters to reopen the policy for public comment, with little in the way of public access to the process itself. Despite the extension of the public comment period, the policy’s text was barely updated.

UCLA alerted students via email last week that the policy is up for a 30-day review period.

Student feedback ought to be the administration’s topmost priority – not something rushed at the end of the quarter – for a policy already characterized as far-reaching. The issue isn’t just the policy itself: It’s that students weren’t taken into account, even though they’re subject to the proposed mass surveillance. The revisions may seem like an improvement, but the timing of the announcement hinders students’ ability to be fully involved in the discussion.

After all, finals season is just around the corner, and few students are bound to be on campus after the quarter ends.

But students fear that immediate access to surveillance could open avenues for breaches of privacy and unfair treatment. Many at the town hall expressed concerns that easier access would enable racial profiling and infringement of students’ private lives.

These students were forced to organize the town hall themselves to actually make their concerns heard.

Although Policy 133 is just one example, its implementation creates a slippery slope for future campus policy changes. The university is currently reviewing two other policies pertaining directly to students: one requiring multioccupancy gender-inclusive restrooms on campus and another amending how UCLA reports student deaths to the community.

All three of these policies regulate issues students care greatly about, and yet they were introduced just before most of them left for summer last year. The comment periods for all three policies are 30 days long, ending after school lets out.

“This is a lot more than administrative vice chancellor turf,” Tuttle said. “This is about the nature of one of America’s great research universities, and if we go forward on this, others will follow.”

UCLA is setting a new precedent for discreetly updating security and privacy practices on public campuses. And while students are most directly affected by this policy, their voices are valued the least.

“It would be difficult to quantify student feedback independently, as all feedback is critical to the review process,” said Laurraine Pollard, Beck’s assistant.

Without the ability to consistently participate in policy changes, students aren’t properly informed about the place they call home. For such an invasive policy, communication to students has been conveniently muted.

Aalisha Dalal, a computer science graduate student, said she was completely in the dark about the policy and the subsequent changes to it.

Policy 133 involves all students’ daily lives and can be especially sensitive for students of color. The university should be actively seeking their feedback, instead of scheduling opportunities for input at a time when students are at their busiest.

Sure, the increase and centralization of UCLA’s security camera systems could improve campus safety. The university’s recent past provides compelling reasons: There was an active shooter on campus in 2016, a gun incident on the Hill last year and vandalism of student government offices in Kerckhoff Hall in 2018. Beck said cameras’ footage was insufficient in all these events due to the security systems’ lack of regulation and coherence.

The administration’s push for cameras’ improved use is not unreasonable. What is, though, is shutting students out of the conversation and allowing a flawed policy to slip through the cracks – or stay unopened in students’ email inboxes.

Students are about to be watched by eyes they hardly know are there. Their opinions matter – and they shouldn’t have to shout into the town hall mic to get their voices heard.