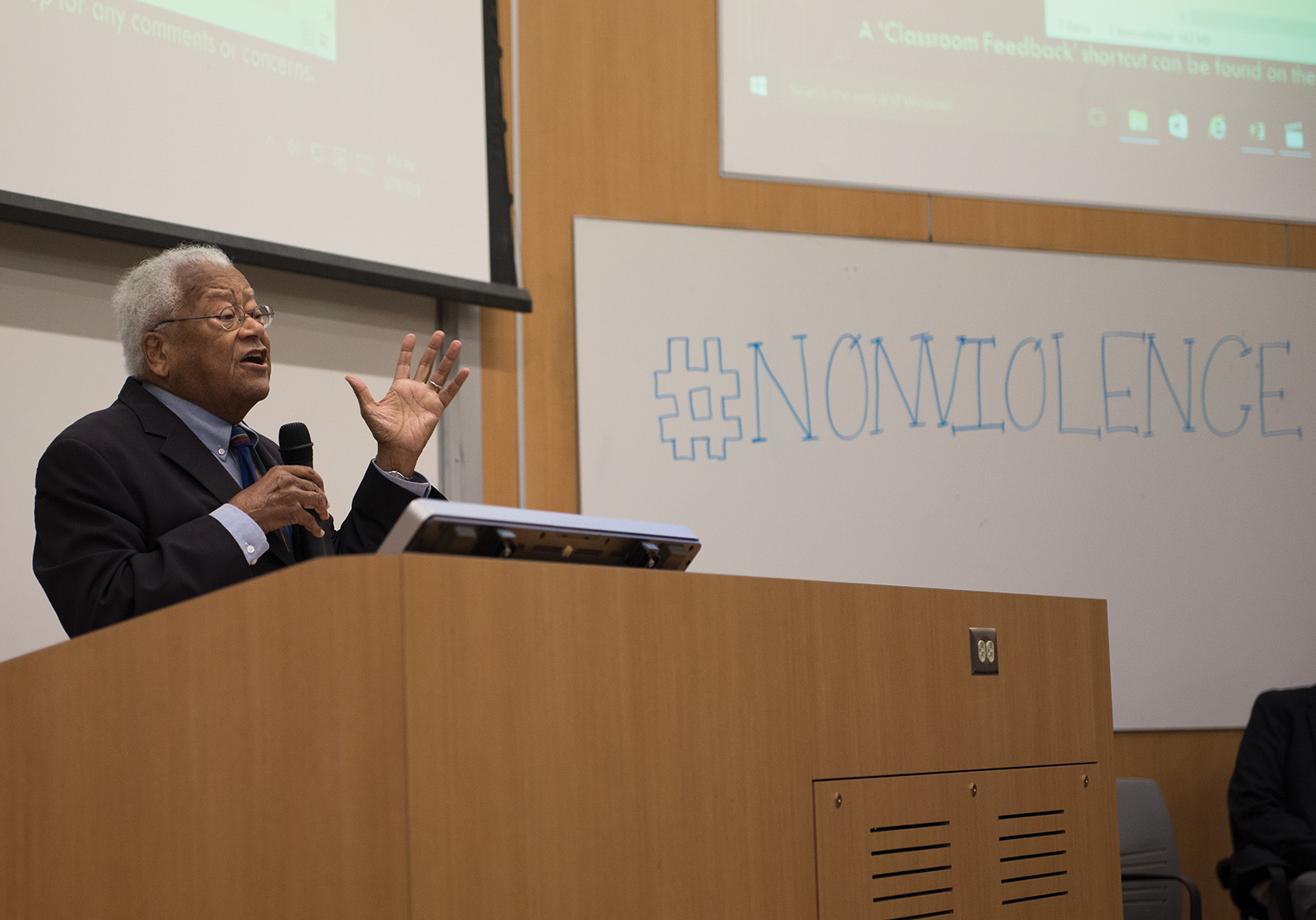 Rev. James Lawson, acclaimed civil rights activist and UCLA lecturer, gave an opening speech during a teach-in Thursday. The event, which featured student presentations and a panel of activists, was organized by students in Lawson’s class. (Emily Ng/Daily Bruin)

Lawson was one of the speakers at a “teach-in” organized by students in the course Labor and Workplace Studies M173: “Nonviolence and Social Movements,” which is taught by Lawson, a UCLA lecturer and civil rights activist who worked closely with Martin Luther King Jr. The event featured a series of student group presentations and a panel of social justice directors – all to raise awareness about immigrant rights and sanctuary movements in the United States.

Lawson said he tasked his students with setting up the teach-in so they could gain experience organizing an event centered around activism.

Guillermo Torres, a panelist at the event and director of organizing at Clergy and Laity United for Economic Justice, said he thinks activist groups should support one another’s respective causes.

“You must be connected to (all people), and you must go beyond your own people when you see injustice, because each one of us has that common dignity as a human being,” Torres said.

Nana Gyamfi, executive director of the Black Alliance for Just Immigration, said her organization tries to address wide-ranging issues that affect all people and said she encourages students to do the same on campus.

“There’s no issue that is affecting people or the planet, in this country – and in some cases internationally – (in which) we are not doing work in the vein of the struggles that have occurred, so we see ourselves as part of those movements,” she said.

Kent Wong, director of the UCLA Labor Center, said he and Lawson have been teaching the class together for 17 years and have worked together as colleagues for more than 30 years.

Wong said he has seen student activism on campus grow over the years and said he thinks the national impact students have had is inspiring.

Diana Tejeda Gonzalez, a third-year sociology and Chicana and Chicano studies student, said she thinks the panel’s focus on nonviolent change was inspiring, and said she felt a personal connection to the issues discussed.

“I think it’s really important that we talk about these histories and make sure that we could create change as a united group, and having students and panelists present was a very heartwarming experience for me, especially because I am a daughter of immigrants,” Gonzalez said.

“The whole issue of compassion and love and human dignity is very important – you can’t have a new society and continue to hate people,” Lawson said. “I think therefore, the need for people to see that and to be engaged in it is critical.”