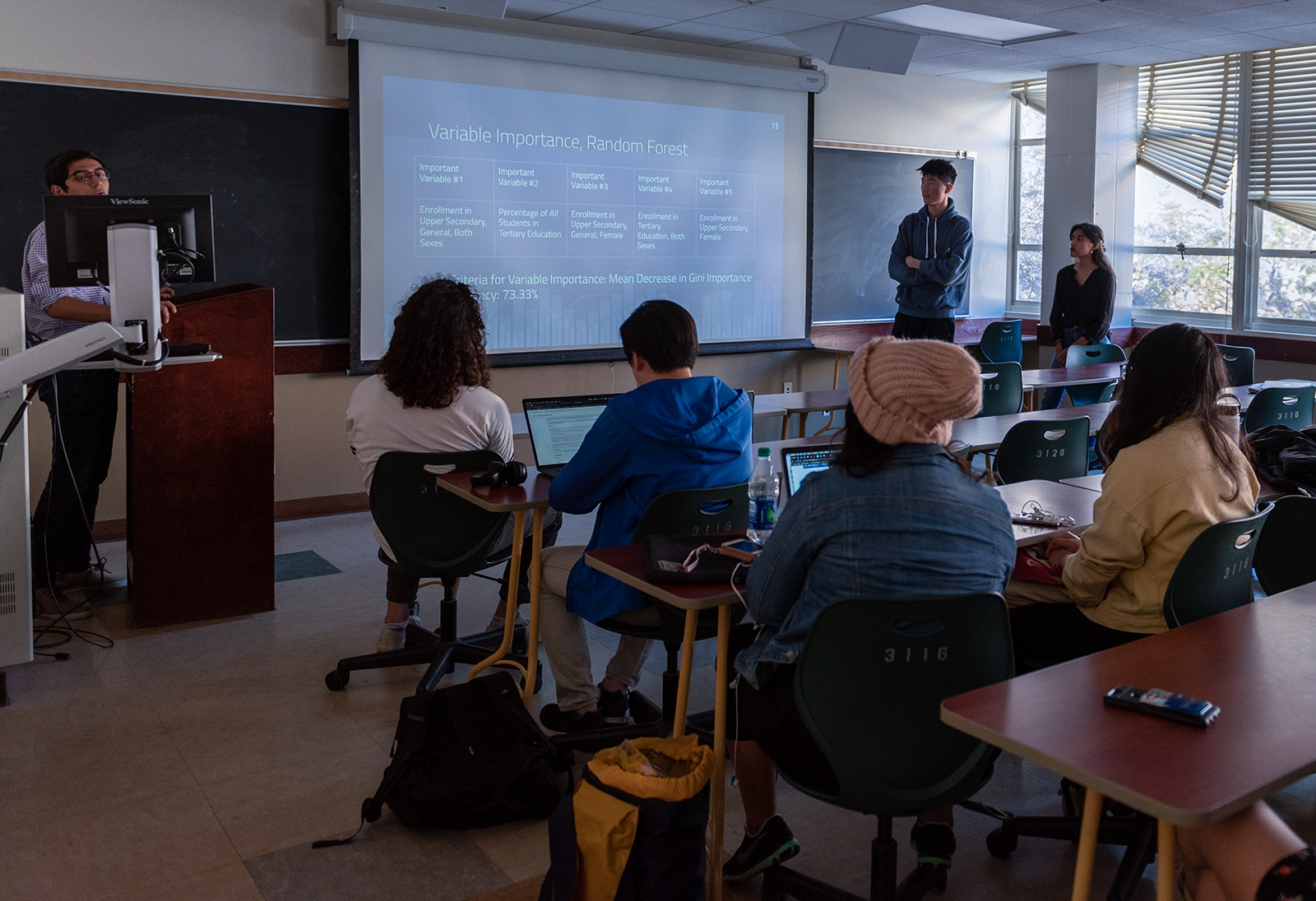 Mason MacDougall presented a model that uses data science to help astronomers find planets with the same living conditions as on Earth by monitoring nearby stars.

When a planet crosses in front of a star, he said, the received light from the star dims. By tracking the luminosities of thousands of stars, the model can pinpoint those that may have potential planets in their orbits.

MacDougall, a graduate student in astrophysics, was one of several students who presented their end-of-quarter data projects at DataRes Demo Day on Wednesday. DataRes, founded in winter quarter, is a student organization that teams up students interested in data science to complete projects, which they publish and present at the end of the quarter.

Richard Yim, a member of DataRes and second-year applied mathematics and statistics student, presented a study that correlates suicide and unemployment rates in the U.S. using data from the World Health Organization.

Yim said he and his partner had worked on the project once a week for seven weeks.

“The main purpose of this project was just to see … what we can learn from just trying to pick out a dataset and clean it (up) and study all the things you can do with different libraries,” Yim said.

“I wanted to see how data science could be applied to social issues, (and) whether we could garner any new information through data science,” Tabucol said.

Garg said he created DataRes to provide students the chance to learn and practice different methods in data science.

Garg said he and co-founder Raghava Govil, a second-year statistics and economics student, started DataRes after they attempted to join a data science organization in their first year and realized none existed at UCLA.

“We just found that really crazy, given that there’s 1,200 clubs on campus,” Garg said. “And data science is supposed to be something that’s growing, that’s getting really popular, that’s being used in industry, but there’s just none of it here.”

He said although computer science classes teach many of the skills involved in data science, they are restricted to computer science students. He and Govil wanted to start a data science organization that teaches these skills and is accessible to everyone on campus, Garg said.

Govil said the club aims to create networking opportunities for students on campus who want to enter the field of data science, and give them the chance to apply skills they learned in class to become more attractive candidates for future employers.

“At the end of the day, if you’re a recruiter, you’re going to ask me what projects I’ve worked on,” he said.

Boyang Yu, a second-year economics and statistics student, said she first heard about the organization on Facebook. She said she joined because she wanted to practice her coding but couldn’t take computer science classes because she isn’t in the major.

Adam Cole, a second-year computer science student who attended the presentations, said he liked that the presenters came off as passionate about data science. He said he hopes to join next year to learn how to code predictive models.

Garg said he hopes rising interest in data science on campus will encourage UCLA to introduce a data science major for undergraduates, which is already offered at UC San Diego and UC Irvine.

“I just think that it’s crazy that at UCLA, we don’t have a data science major … for undergraduates,” he said. “But the goal is that if enough people are talking about it, and enough people demand it, then we will eventually get it.”