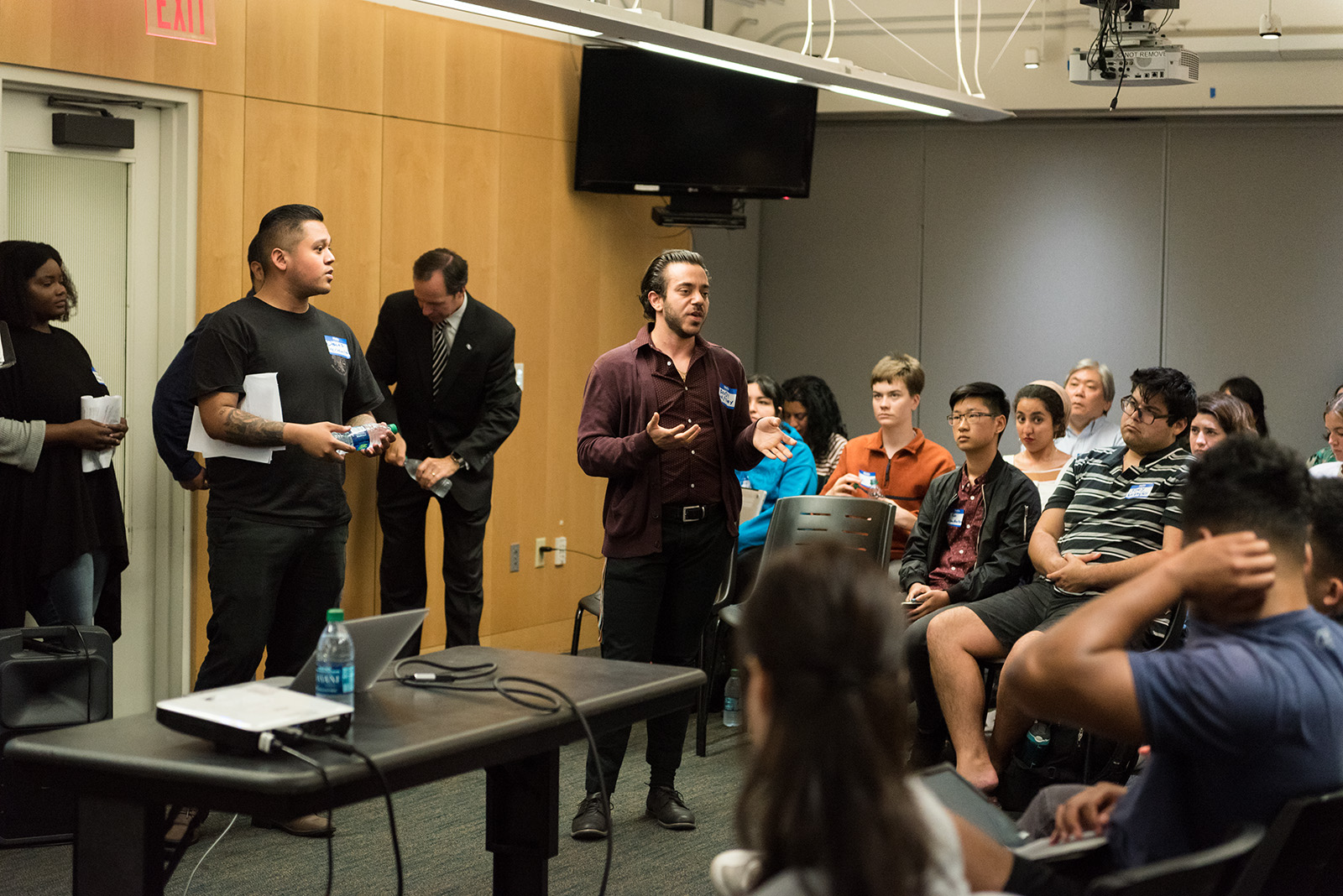 Students and faculty expressed their questions and concerns about Policies 133 and 890, regarding security camera guidelines and gender-inclusive facilities, respectively. They discussed drafts with administrators at a town hall Tuesday. (Daanish Bhatti/Daily Bruin)

Correction: The original version of this article misidentified Chelsea Dyapa.

UCLA Policy 890, Gender Inclusive Facilities, outlines new requirements for gender inclusive facilities on campus. Policy 133, Security Camera Systems, seeks to create a centralized database of recorded images and establish guidelines for the removal of cameras that are not compliant with the new policy. Both policies drafts were posted in late May for student review.

Students at the town hall said they think Policy 890 should be further revised to address potentially discriminatory language.

Chelsea Dyapa, a third-year philosophy student, said they thought the policy was discriminatory because it could potentially be too costly to implement, limiting the number of gender-inclusive facilities campuswide. Dyapa added they think the policy should go further to increase facility accessibility to LGBTQ and nonbinary people on campus.

“Specifically the floor-to-ceiling dividers for all-gender restrooms, they want them to be much … longer than for men’s and women’s restroom, and we take this as a sign of transphobia because … this basically comes out of a want for privacy and an all-gender restroom, and that want for privacy comes from a fear of trans and nonbinary people,” Dyapa said.

Robert Gamboa, chair of the UCLA committee on LGBTQ affairs and graduate student in the school of public affairs, said while administrators have been supportive of the LGBTQ community in drafting Policy 890, he thinks it still needs further revisions to become more financially feasible. Gamboa said the height requirements for the bathroom stall partitions could inhibit renovations for multistall gender inclusive restrooms by driving costs up.

“Let’s put a policy … in place that’s equitable, but it’s not cost prohibitive, and it’s not transphobic or homophobic in any way,” Gamboa said.

Assistant Vice Chancellor Kelly Schmader said he is glad to receive input from students at the town hall in regard to Policy 890 because he learned about concerns regarding the policy that he had not considered.

“I was surprised to learn that there’s concern about the floor-to-ceiling partitions, which I thought would be something that would be well received, and unfortunately, are being interpreted as being discriminatory,” Schmader said. “(But) that’s the beauty of having a 30-day review period, and having students like ours who are willing to come out and voice their concerns.”

Students also voiced their concerns about potential racial profiling via security camera monitoring in regard to Policy 133, which students and faculty had previously addressed in a town hall in September.

Eduardo Velasquez, Undergraduate Students Association Council general representative, said he thinks some of the language in the policy, especially regarding live camera monitoring, may be too open to interpretation to effectively protect against racial profiling.

Administrative Vice Chancellor Michael Beck said the policy should not lead to racial profiling because it only permits live camera monitoring under specific parameters.

“One of the parameters is that you actually can only be monitoring behaviors and not specific identities,” Beck said.

There are currently 2,500 cameras on campus that are not regulated by a single policy, said Beck. He also said the policy aims to unify regulations on campus security cameras and remove those that do not comply.

Salvador Martinez, a third-year applied mathematics student who helped organize the town hall, said he thinks administrators adequately dealt with student concerns and added he was glad several students attended the town hall even though it was held late in the quarter.

Schmader said he was impressed by the number of students who attended the town hall during week nine and said he commended Beck for making the policy review process more accessible to students.

“Anytime we’re dealing with a policy that has student concerns, then we’re going to have these kind of forums where (students) can express themselves in person, that never was here before,” Schmader said. “I commend him for that, it takes more work from people like me on the staff, but it makes it all worthwhile.”

The review periods for policies 890 and 133 ends June 20, after which administrators will take student input into account and propose more revisions.