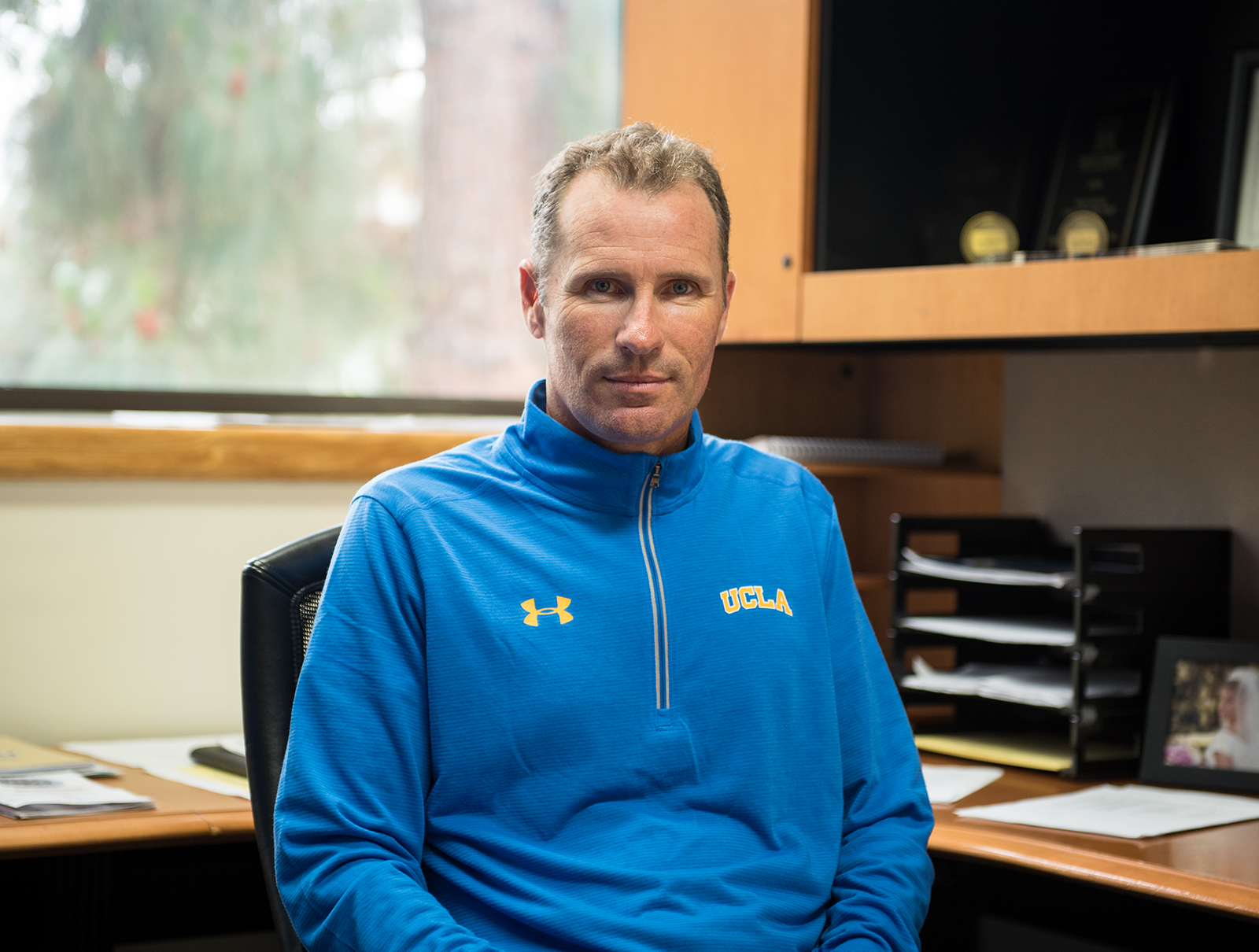 Coach Ryan Jorden will take on his first season with UCLA men’s soccer next season. Jorden previously was the head coach at the University of the Pacific over the past five seasons, where he restarted a dormant program in 2013 and led the Tigers to three NCAA tournaments. (Daanish Bhatti/Daily Bruin)

Daily Bruin’s assistant Sports editor Gabriel McCarthy sat down with UCLA’s new men’s soccer coach, Ryan Jorden, to discuss settling into coaching in Westwood and his ambitions for the future of the squad.

Daily Bruin: What has been the most exciting part of joining the program and the new project that lies ahead of you?

Ryan Jorden: For as long as I can remember, UCLA from a soccer standpoint has been the pinnacle of college soccer – at least on the West Coast. It should be. The excitement of being on the university campus that UCLA is, and to be able to recruit student-athletes to show the amazing environment available to them is unrivaled. Certainly, that should allow us to recruit top student-athletes that want to be a part of that. It’s a really exciting place to be with the history, tradition and success over the course of time. Getting to be a part of that is tremendous, while also getting the opportunity to shape the future of it is a real responsibility.

DB: What were your previous connections to UCLA, and what was the hiring process like?

RJ: I’m from Santa Barbara and was fortunate enough to play against UCLA every year. So, I’ve been able to see some of the great teams and great players that have been through here. Certainly, in the interviewing and hiring process, I was very cognizant of the opportunity that was in front of me. When the position was offered to me, I was extremely excited about it and honored that I was being given the opportunity to run this program and be in charge of steering its future.

DB: You have experience with long-term projects, especially after you led the University of the Pacific to three NCAA tournaments after its first season back in Division I since 1986. UCLA has not necessarily been in a slump, but after a tough season two years ago, what are you hoping to change to allow the Bruins to be more competitive on the national stage again?

RJ: Over the course of time, there have always been really talented student-athletes here – guys who are terrific players. I don’t think that has changed. I think that it’s really important that we frame and shape an environment (where) everybody understands the opportunity to play and wear the UCLA soccer shirt is a big one. The opportunity to follow in the footsteps of some really famous alumni, whether they’ve been in national teams or in professional circles upon completing their degrees and moving on to the next level. We have got some great models to look up to, so it’s exciting to know those guys and those who were a part of the history from before us want to be involved. To get them connected to our team and have our current team feel the UCLA soccer family is a big part of what we want to do over the course of the coming weeks and months. That tradition and history has to be the heartbeat of what drives our players forward.

DB: What are you hoping to bring to the program in terms of philosophy and style of play?

RJ: UCLA historically has had the capacity, because of the quality of players here, to have the most attractive type of football that can be played in college soccer. Over the course of the past five years, I feel the groups that we had at Pacific were built on the back of really trying to play a ball-retentive, possession-based, dynamic attacking type of soccer. I think it’s a little bit (countercultural) to Division I, which can be a little bit more rugged and predicated on raw physical qualities. Hopefully, the type of football we play is entertaining because we have the ball. Nobody wants to go watch their team sit and defend – people think you’re a bad coach if you have to do that. We should be able to put a product on the field that not only showcases the quality of players we have and allows them to express themselves, but, I also want it to showcase their intelligence as (footballers) when making decisions and knowing how to expose the opponent by creating a numerical advantage, seeking space and being able to move the opponent. All of those things are predicated on having the ball. So, we want to be a team that can dictate and boss the tempo as well as switch into really high gear and a really high tempo that hopefully other teams can’t cope with. Stylistically, we want to play an entertaining brand of soccer that you probably won’t see on many college campuses.

DB: What are your thoughts on the current squad and what are you hoping to bring to the program in terms of talent through recruiting?

RJ: There were holes that needed to be filled throughout the team. We have to find players who can play the standard that befits being in the squad at UCLA. I’ve had a great time with the group of guys that are here as we’ve been training for a couple of weeks, and it’s been really enjoyable getting to know them as individuals and the collective quality of the group. We’re working really hard at the recruiting process because we still do have a number of holes to fill. It’s an exciting time to get to immediately shape and craft the playing squad. I’m working with the assistant coaches here, formulating a recruiting plan and going and trying to bring those players here. It’s a lot of fun, and to develop those relationships, especially by giving someone the opportunity to come to a place like this, but also to find players that are going to be a great fit for us going forward.

DB: What are your plans for the summer period, especially in terms of recruiting?

RJ: We’re not allowed to have any contact with the guys from a playing standpoint during the summertime. Hopefully, for them, they know the work they need to do in order to come back and be fit to engage with the college soccer season in the fall. From a coaching and staff standpoint, it’s a recruiting time where we’re looking at next year’s class and the one following that, starting to evaluate and have conversations with top prospective student-athletes for the years to come. The nice thing about Southern California is that a lot of events come here and we have the greatest talent pool in America. We need to be California-based, especially if you look back at the history and tradition, for a lot of years it was really a California-based team. It doesn’t mean we won’t look at international players who can and add a different perspective and experience factor, as well as it doesn’t mean we won’t look at players outside of California. We’re fortunate enough with the Academy Showcase in the summertime coming to us, and we don’t have to go to Florida to watch it. We’ll be in California pretty consistently through the summer, making sure we know every top team and the players in (the Academy Showcase), to make sure we have a picture of players from outside regions that would be good candidates to be student-athletes here.

DB: Obviously, you’ve had experience with the postseason, after taking Pacific to the NCAA second round twice. What are your thoughts on NCAA tournament play and your ambition for the Bruins in sudden-death matches?

DB: Any concluding remarks about what lies ahead?

RJ: Obviously, the season is when you get the chance to really find out about your team and work on your product. Any time there’s a coaching transition, there’s going to be some uncertainty over what that transition is going to look like. I think the fun part is, as I’ve seen working with the guys over the past couple weeks, their adaptability, qualities and desire to really grow to work together has been significant. I’m really excited about the prospect and looking forward to a couple of months down the line when we have the entire team here with the incoming players, and we get to figure out how good our team in 2019 can be.