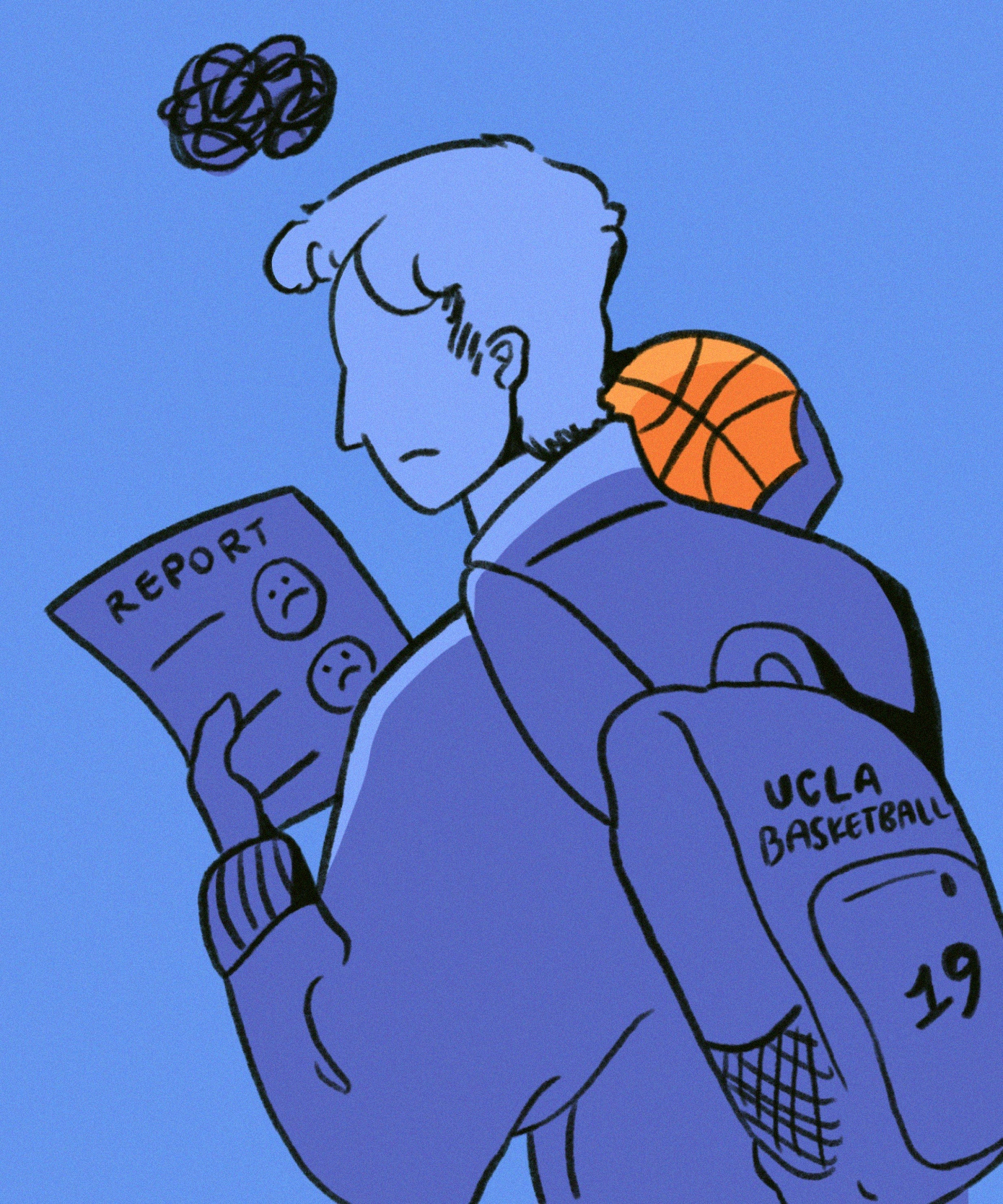 To some Bruins, maintaining a 2.6 GPA while juggling part-time jobs or extracurriculars might prove difficult.

To others, though, it’s the difference between a shot at their dreams and a career that doesn’t require drinking protein shakes.

The NCAA released Academic Progress Rate reports, which track student-athletes’ academic and retention rankings, earlier in May. Universities are judged for their ability to retain athletes, as well as for players’ academic performance – such as their GPAs. The final score is based on a four-year average.

UCLA currently ranks at the bottom of schools in the Pac-12 conference. But no one should be surprised: The university’s scores for men’s basketball and football have been declining for the past four years.

The men’s basketball team’s average score between 2015-2018 was 933, the lowest in the Pac-12. Football’s multiyear score is a lackluster 948, also the lowest score in the conference.

If Bruins on UCLA’s most popular teams become ineligible for the NCAA tournament, they won’t have a shot at the NBA or the NFL. All the resources UCLA provides athletes are akin to throwing money in the air if athletics teams end up only three points away from ineligibility.

Student-athletes’ academics need to be prioritized at all costs. Instead, UCLA seems complacent – accepting the lowest APR scores in the league as long as its athletes keep playing and bringing in funds.

The university has to do more to support these Bruins, especially with the great number of athletes transferring schools or striking out on a 2.6 GPA requirement. Student-athletes are driven to prioritize sports over their academics, and that will continue until UCLA incentivizes otherwise, perhaps by requiring less hours for game preparation. The university should ensure its athletes receive what they came here for: a college education and an athletics experience.

UCLA Athletics provides student-athletes with an academic mentorship program, academic counselors and special privileges like early enrollment. These players also have a specialized academic support plan with group or individual subject-based tutoring, athletic scholarships, travel accommodations and a mandatory alternative career leadership program. But these clearly aren’t adequate if the APR scores reflect that a large number of players are leaving the school with GPAs lower than 2.6.

Moreover, once student-athletes attain a 2.6 GPA, the university’s APR score is no longer at risk, meaning UCLA can push them to participate in NCAA tournaments to the fullest. That’s apparent, given the university does not set a higher GPA requirement than the NCAA requires, even though most student-athletes’ transcripts can be what carries them into their nonsports careers. The NCAA estimates that student-athletes have anywhere from less than a 1% to a 10% shot at going pro, depending on the sport.

Christina Rivera, UCLA’s senior associate athletic director, said 43 out of the 49 basketball players included in the APR metric received a perfect score, but six players with lower scores brought the average down to a 933 between the years of 2014 and 2018.

“Because of the amount of time (the athletes were) putting in (their) professional pursuits … (they) didn’t get the eligibility point (for not passing academic requirements) in spring and they didn’t receive the retention point for going pro,” Rivera said.

Vincent Cheng, a first-year aerospace engineering student who follows UCLA Athletics, said he is not surprised to see these scores, even though he’s aware of some of the resources student-athletes have.

“College sports make so much money off of them, even though athletics take up such a big portion of their time,” he said.

But the blame shouldn’t solely be placed on a few slacking students and players who left their teams. The declining APR scores indicate the school’s failure to support student-athletes with resources and its tendency to allow students to slip through the cracks.

Other schools in the Pac-12, like University of Oregon and USC, rank significantly lower academically than UCLA, but still crank out out higher APR scores. Over the past four years, Washington State University’s APR scores never dipped below 960, while its golf teams scored perfect 1,000s. Arizona State University is in its fourth year of hitting an average team score above 985.

If smaller schools in the Pac-12 with less resources – compared to UCLA’s planned athlete academic center – and less brand recognition can rise far beyond the 930 requirement, UCLA can definitely do better.

The university needs to recognize the common denominators in the student-athletes who leave UCLA with subpar GPAs. Most of them will not go on to pursue professional sports careers, so without shifting the focus onto academics, UCLA is putting these students at the bottom of the draft in their academic careers.

Certainly, the resources student-athletes have span from academia all the way to mental health – more than some other universities can provide. UCLA is even building a student-athlete academic center with donor money.

But let’s face it: A shiny new multimillion dollar academic center is not going to put the football team on honor roll. There is no magical solution to making student-athletes do better academically.

Except, of course, letting them hit the books instead of the gym.