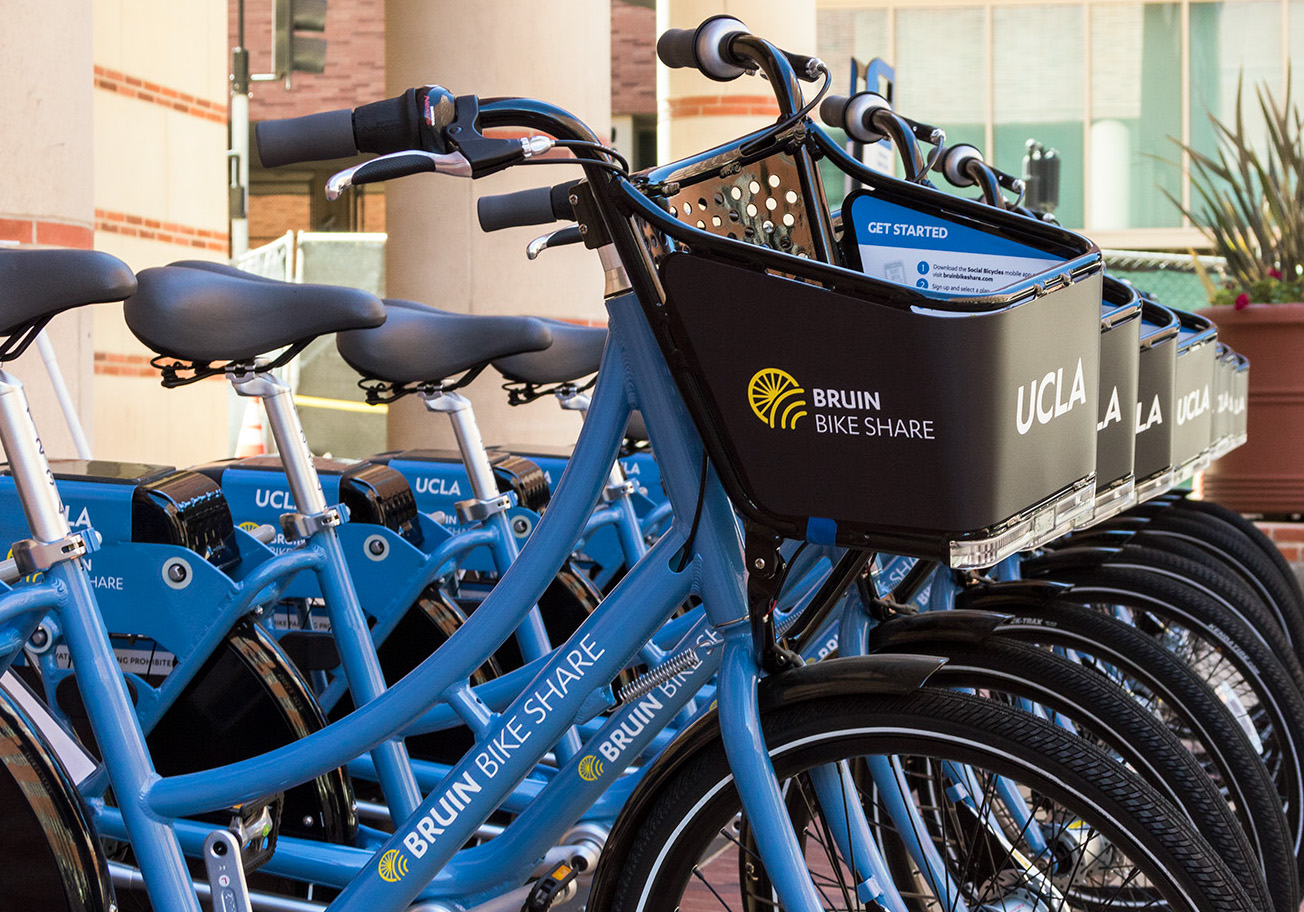 Bruin Bike Share has seen a decrease in usage as a result of electric scooters since their appearance on campus in 2018. UCLA Transportation is considering several possibilities to mitigate this decline, said Alison Hewitt, a UCLA spokesperson. (Daily Bruin file photo)

A rise in electric scooter usage has led to declining ridership of an on-campus bike share program.

The number of electric scooter rides in the United States doubled between 2017 and 2018, according to a report from the National Association of City Transportation Officials. UCLA Transportation said in an email statement this has resulted in declining usage of its Bruin Bike Share program, which allows riders to rent and unlock bikes from one hub and return them to any other hub in Westwood, Beverly Hills, Santa Monica and West Hollywood.

Alison Hewitt, a UCLA spokesperson, said in an email statement that despite the rising popularity of the scooters, the bike share system offers different benefits, such as lower prices.

“The system is still in regular use, and the price point is much lower than the scooters or e-bikes,” she said. “Some people prefer regular bikes to e-bikes, and many people prefer bicycles of any type over scooters.”

UCLA Transportation is considering several changes to its bike share system to mitigate the decrease in ridership, such as a scan-and-go feature which would make it easier for students to unlock the bikes by scanning a QR code on their phone, Hewitt said.

“UCLA could add electric scooters and e-bikes to campus and still retain the existing bike share system, providing even more options for mobility on campus,” Hewitt said. “Seven public transit agencies serve UCLA because one bus does not fit all. That may well be the case with micromobility.”

UCLA Transportation said in the statement that partnering with scooter companies such as Bird and Lime would help the administration improve pedestrian and rider safety on campus.

“We like our campus community to have options, and a formal partnership would provide leverage allowing the university to better ensure the safety of the devices, and to require that the scooter vendors provide an option to obtain a helmet and inform riders of local laws,” Hewitt said.

Several students said they think the rise in electric scooter usage was cause for safety and environmental concern.

“(The scooters are) something that’s low in practicality but high in entertainment,” Wang said. “I think it’s a safety hazard to pedestrians, cars and users since people don’t wear helmets, follow traffic laws or even realize they are actual electric vehicles – some of them treat them as toys.”

“Not every individual is capable of safely riding e-scooters,” Hallman said. “Having the scooters publicly available creates a false sense of security for prospective riders – people who can’t ride a bike are unlikely to rent one. However, I think most people assume they’re capable of riding a scooter.”

Hallman added he also thinks electric scooters are not as environmentally beneficial as many may assume.

Addiy Giron, a fourth-year neuroscience student, said she thinks electric scooters have overtaken bike share programs because they are more convenient, but that she is worried about the scooters’ environmental impact and riders’ lack of safety compliance.