The TOEFL cheating scheme: A college admissions scandal you didn’t hear about 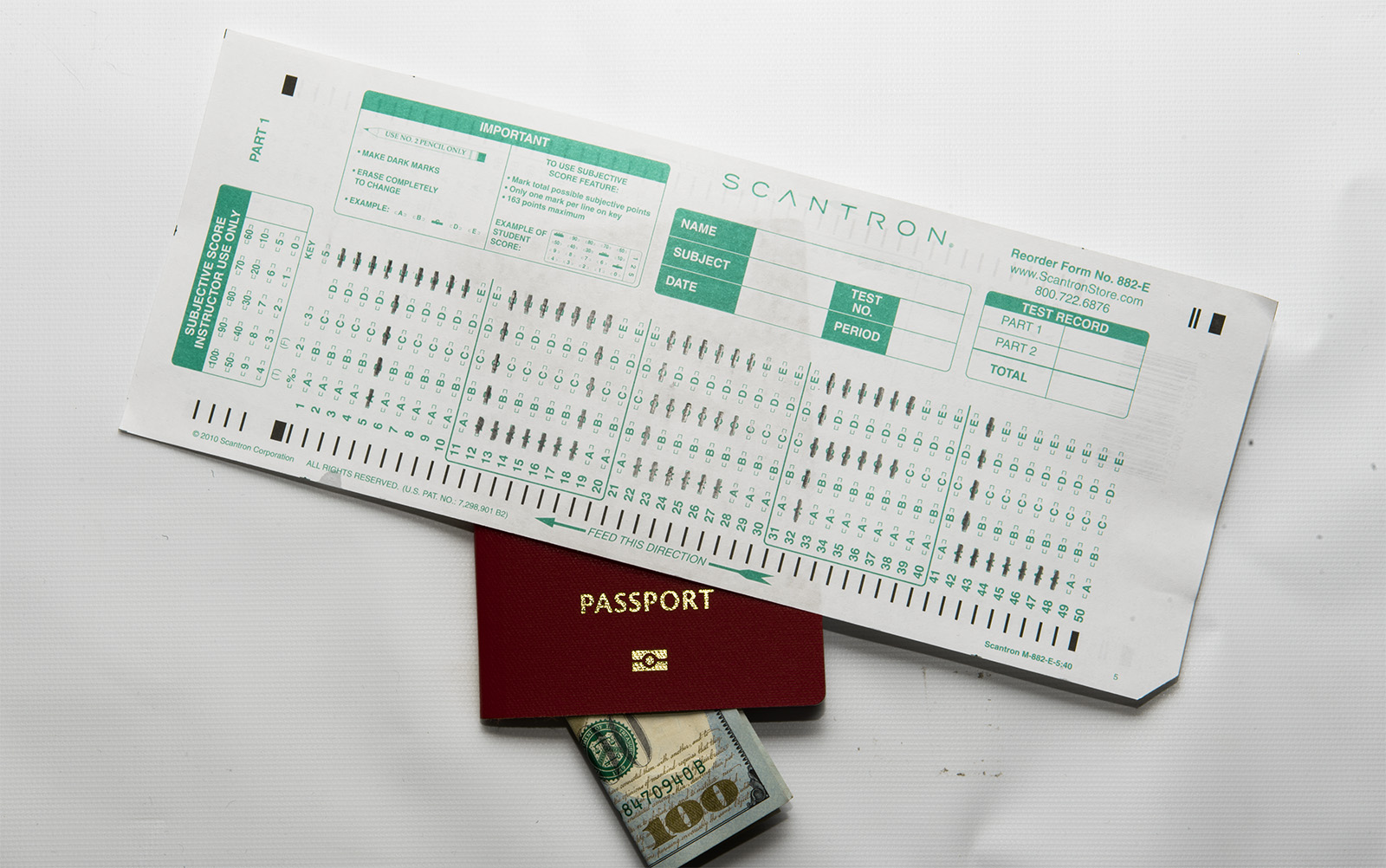 UCLA was implicated in not one, but two recent university admissions scandals. A federal investigation in March revealed that international students hired people to fraudulently take the Test of English as a Foreign Language. The fact that such a scandal dodged the news shows us how pedestrian it is to cheat for admissions. (Photo by Tanmay Shankar/Daily Bruin, Photo Illustration by Axel Lopez/Assistant Photo editor)

If you’re looking to get into your dream school the right way, you’re out of luck.

If you happen to have a couple of fraudulent test-takers at your disposal, though, it looks like you have options.

The Operation Varsity Blues college admissions scandal dominated the public conversation from March through April, and rightfully so – no one expected to see Aunt Becky make headlines in real life for allegedly committing mail fraud to get her daughter into USC. The scandal called into question the legitimacy of the admission processes of prestigious institutions, including Harvard, Stanford and UCLA, after federal investigators brought to light different instances of bribery and fraud within these institutions.

But lost in all this noise was another cheating ring exposed in March by federal authorities. A UCLA alumnus was arrested along with four other people across California for allegedly helping Chinese citizens obtain their F-1 student visas by cheating on the Test of English as a Foreign Language. The cheating scheme was led by Liu Cai, a UCLA graduate who allegedly used fake Chinese passports to take the TOEFL in place of international students.

The scheme helped more than 40 international students gain admission to universities such as UCLA, UC Irvine and the University of Alabama.

These scandals reveal a porous, easily manipulated admissions process for even the most prestigious of universities – a process where honesty takes the backseat in favor of bribery, cheating schemes and fraudulence.

But while the Varsity Blues scandal took the national spotlight, the TOEFL cheating ring was lost in the news cycle. That’s because it didn’t feature millionaire parents writing fat checks to coaches to guarantee their children’s admission. Instead, the TOEFL scandal only involved a couple of 20-somethings taking advantage of an exam’s sloppy identification system – something that’s more likely, and thus more dangerous, than Lori Loughlin paying $250,000 to get her apathetic-about-education daughter into USC.

Clearly, there are more ways to cheat the admissions system than upfront bribery – and these flaws need to be considered.

It seems to be quite easy to manipulate the admissions system through these extracurricular means. According to a U.S. Immigration and Customs Enforcement news release, TOEFL-takers are required to present an original, unexpired, government-issued identification document from their home country. Cai, along with the other five accused, used counterfeit Chinese passports to take the test in place of 19 Chinese nationals across different Los Angeles testing locations.

The demand for this kind of fraudulent test-taking seems to stem from the notion that getting into a prestigious university is key to maintaining a proper social image.

Jerry Tao, a first-year economics student, said families in China put a heightened value on what higher education institution their children end up going to.

“Parents are willing to pay an astronomical amount of money and do anything they can to get their children into elite institutions,” Tao said. “They don’t consider their child’s career paths or life after graduation; it’s all about sending them to top institutions.”

And this cheating ring bust isn’t even the first of its kind.

Fifteen people were accused in 2015 of paying others to take college entrance exams in their place. In a method very similar to the LA bust, imposters used fake Chinese passports to take tests, including the TOEFL and the SAT, around the Pittsburgh area from 2011 to 2015.

Evidently, the admissions system isn’t foolproof. Its requirements are just obstacles for those devious and resourceful enough to jump right over. And it doesn’t even matter to these students that they graduate – only that they’re able to say they got into a university like UCLA.

Operation TOEFL Recall is not unique. It’s one of the many insidious and low-profile ways those with access – or the passports – have gamed the system to get into higher education institutions. The celebrities of Varsity Blues may have caught our eye in March, but the cracks in the system run far deeper than just athletics coaches being able to make an extra hundred grand to sneak your child into UCLA.

Of course, it might seem hard to thoroughly address these more subtle forms of rigging the admissions system such as cheating on exams. Lying might just seem part of the process of getting into a top university. But the deteriorated nature of the college admissions process was made evident when a cheating ring wasn’t even the most scandalous issue higher education faced this year.

For now, say goodbye to being your true self in your college applications.

Deception just might be the No. 1 way to get into the No. 1 public university.