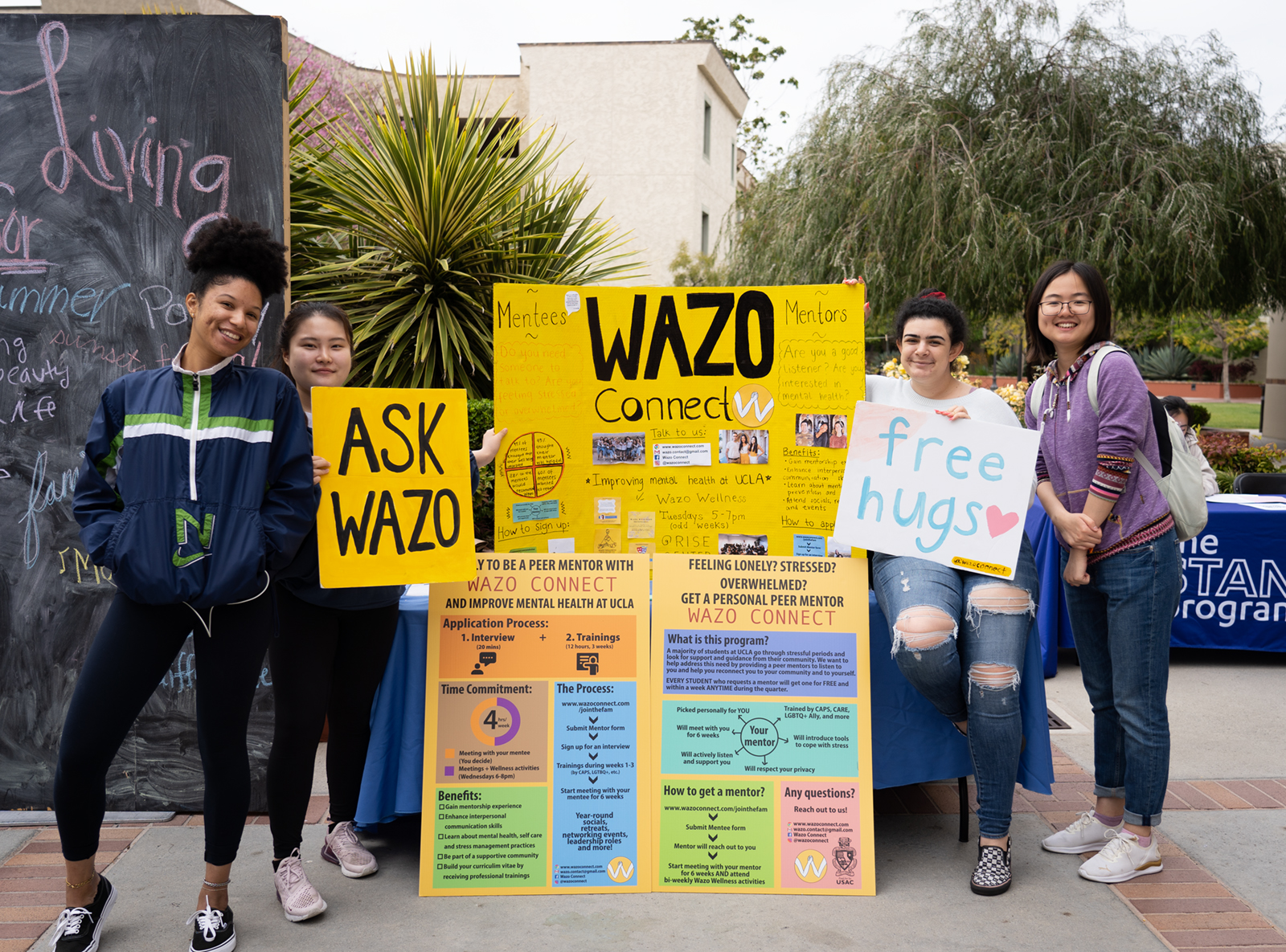 Wazo Connect was one of the groups that tabled at the second annual Black and Blue event, which featured a mental health resource fair and spoken-word poetry performances. (Elise Tsai/Daily Bruin)

Students performed spoken-word poetry to discuss the intersection of racial identity and mental health at an event Wednesday night.

The performances were part of the second annual The Black and Blue Project: Mental Health Awareness Fair, an event hosted by UCLA Residential Life that aims to promote dialogue about mental health in the black student community. The event featured a resource fair tabled by mental health organizations, including UCLA Counseling and Psychological Services, the Campus Assault Resources and Education program, Peer Assistance and Wellness Support, Active Minds UCLA and the Queer Alliance.

Marieka Turner, a co-organizer of the event and ResLife’s health and well-being coordinator, said in an email statement ResLife developed the idea for the event when faculty and students gathered to discuss the day-to-day mental health issues that black students face and how to best support them during a Black and Blue mental health initiative in winter 2018.

Turner said in the statement ResLife held the event because it recognizes identity and culture can affect perceptions of mental health.

“We wanted to give students a space to reflect, share and establish access to services and touch points on our campus that match and validate their perceptions,” Turner said.

Chiamaka Nwadike, a third-year human biology and society student, performed a spoken-word poem that she created by generating sentences using key words from the movie “Moonlight,” with a computer code written by her classmate Ayush Lall, a fourth-year mathematics of computation student.

Nwadike said she used the movie “Moonlight” because it is a movie about queer love in the Black community, which she initially intended the poem to be about. However, the word generator picked up on darker themes within the script and ultimately created a poem about dark emotions that reflected her stressful experience with the quarter system.

Nwadike said she thinks it is important to hold events like Black and Blue to continue the conversation about Black mental health on campus.

“I’m especially passionate about advocating for mental health issues in the Black community because it’s not talked about a lot,” Nwadike said.

Several students from the black community on campus said they think creating a space for discussion about mental health is beneficial.

Alexandria Davis, incoming chair of the Afrikan Student Union and a political science and African American studies student, said she is happy that students are beginning to create a dialogue about the experiences that black students face in regard to mental health.

“I feel like with black students, stigma comes a lot from our families. A lot of black students in the community are also first-generation, so their parents have never experienced the college environment and the trials and tribulations you have to go through,” Davis said. “No one is really trying to talk it out.”

Nia McClinton, director and founder of the Black Performing Arts Collective and a third-year African American studies student, performed haikus about the resilience of black women and battling depression.

All three performers of the night were members of the BPAC.

Taylore Thomas, a third-year African American studies student, performed a spoken-word poem entitled “Bought and Paid For,” which focused on her journey of overcoming self-criticism and embracing self-love.

She said she hoped sharing her story through her performance would further open dialogue about mental health in the black community.

“I think mental health is something that is super relevant that many people suffer from but may not even know it, and so just talking about it in less confrontational spaces where art is present may just connect people in a different sense,” Thomas said.