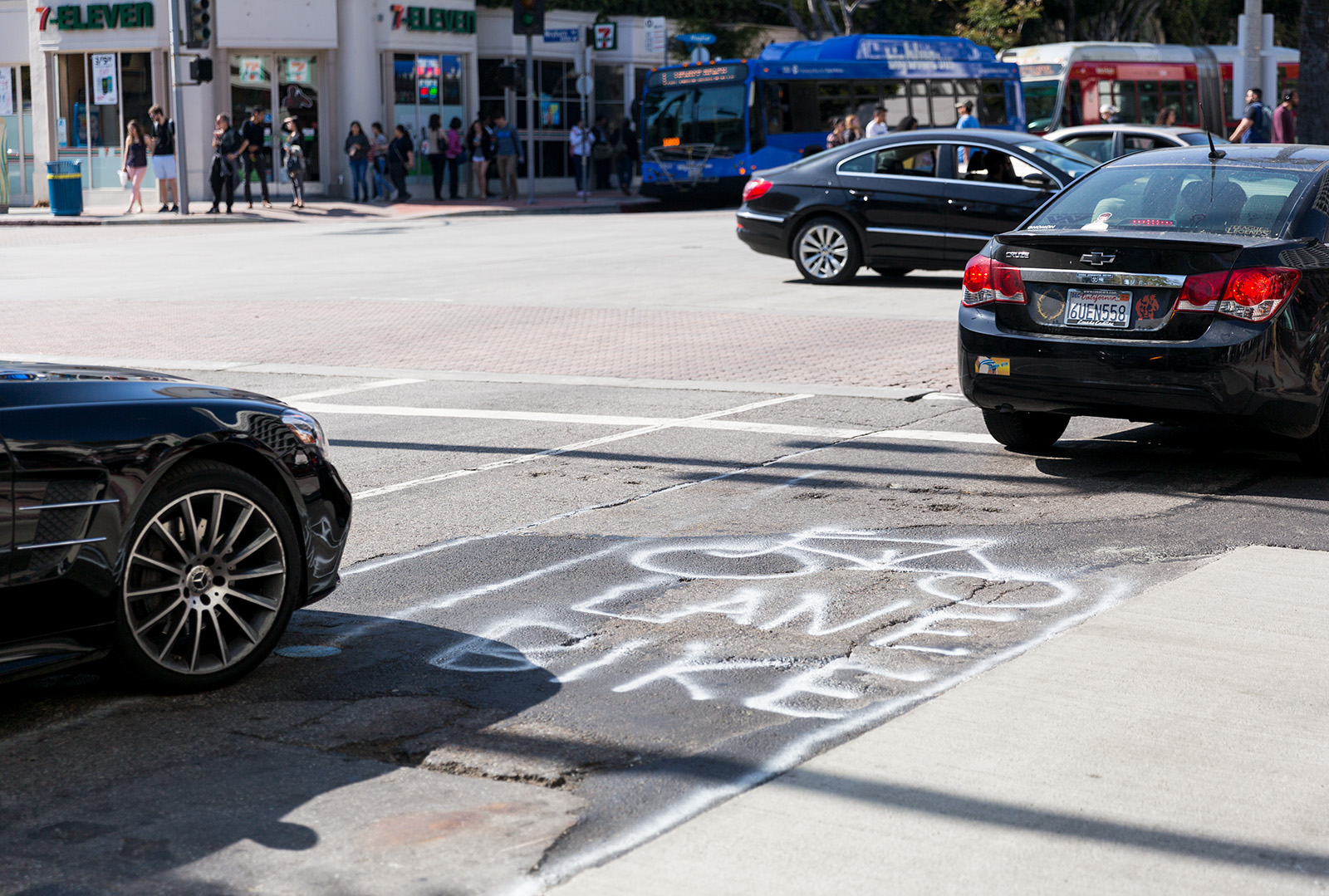 The Westwood Village Improvement Association applied for a grant to fix Westwood Boulevard – but it’s choosing to refurbish one of the nicest streets in the Village instead of doing more. (Daily Bruin file photo)

Uneven asphalt is rife with cracks and unwanted vegetation.

Every trip in and around Westwood’s apartments is an adventure. From Gayley to Veteran avenues, battered roads test the suspensions of students’ cars, and each fissure in the sidewalk feels like a chasm.

So obviously, when the Westwood Village Improvement Association applied for a grant to fix streets, it focused on an area approximately half a mile away.

The Great Streets Initiative is an organization started by Los Angeles Mayor Eric Garcetti that is dedicated to renovating city streets to reinvigorate communities. Organizations can identify and recommend streets in LA as a project area to improve.

Ten applicants for the grant will receive up to $15,000 for community outreach. Of those 10, four will receive about $500,000 to fix the challenges mentioned in their applications.

The main issues the WVIA identified in its application are overcrowding at bus stops, lack of scooter and bicycle parking, worn-down pedestrian signs, and vacant storefronts along Westwood Boulevard from Le Conte Avenue to Wilshire Boulevard.

The money the Great Streets Initiative offers could make a huge difference. But the WVIA only applied to fix Westwood Boulevard – equivalent to dousing a kitchen fire while the Hindenburg burns in your backyard.

Most students don’t need to use Westwood Boulevard to commute to and from campus every day. The streets that actually matter are the ones in the North Village area surrounding off-campus apartments – streets so destroyed it’s almost a hazard to walk on them.

Andrew Thomas, the executive director of the WVIA, said outdated infrastructure is one of the main challenges Westwood faces.

“We have a need in our community to make our streets and sidewalks safer, more efficient and better serving for our businesses,” he said.

But just acknowledging streets need to be fixed isn’t enough.

The improvements the grant can offer Westwood would be better for the community and indirectly better for the students of UCLA. But as it stands, the money wouldn’t directly impact them unless they walked into Westwood Village – through cracked streets, of course.

The streets around UCLA student apartments have been in a state of disrepair for years. They are old, vegetation sprouts from the cracks and the sidewalks are so uneven that every step could result in a nasty fall. Students have learned to keep their eyes on the ground unless they want to end up scraped and bloodied on the unforgiving concrete.

Emiliano Gomez, a third-year English and linguistics and French student, said he thinks the grant money could be used in a better way.

“I think they’re trying to make the area look nice, like repave it, make it look extra nice,” he said. “It makes no sense.”

Gomez described how some of the potholes in residential areas have been there for decades.

“My sister’s Uber driver told her to hang on because there was a speed bump coming up. Once they went over it, my sister asked the guy if he drove around here often,” Gomez said. “He said, ‘No, I graduated here in 1996. They still haven’t fixed it.'”

These decades-old issues indicate a systemic problem within the Westwood community – one in which students’ needs are consistently pushed aside.

“The wheels hit the cracks so hard sometimes that I feel like I’m about to fly off,” Keenan said.

With all this considered, it’s hard to think that Westwood Boulevard’s improvements are more urgent than those of other streets in the area.

Matt Molnar, a third-year economics student, said he drove down Westwood Boulevard recently and thought it was in much better shape than many other streets in Westwood.

“The only place I really saw with any damage was the cross section of Westwood and Wilshire (boulevards),” Molnar said.

And this is true. Westwood Boulevard is low maintenance, but the WVIA is intent on sanding down the rougher parts of the block. Fine-tuning a street that’s good enough isn’t the best allocation of funds.

If Westwood is one of the chosen areas, the allocation of grant money will be discussed among community members in a series of town halls, Thomas said.

The WVIA should heed the concerns of students who show up to these public forums. Students may be a transient group in Westwood, but their short time in the neighborhood isn’t justification for leaving the North Village looking like a dump.

Some people may argue the WVIA’s planned improvements would better serve the community as a whole. But students make up a large portion of Westwood’s population and their needs should be taken into account in a proportional manner.

Student issues are consistently pushed aside, and this money should be used to improve their living conditions. By applying to fix Westwood Boulevard, the WVIA is making it clear it is more concerned with the aesthetics of the Village rather than the basic needs of its largest constituency: students.

After all, it’s hard to improve a village without helping those who make it up.