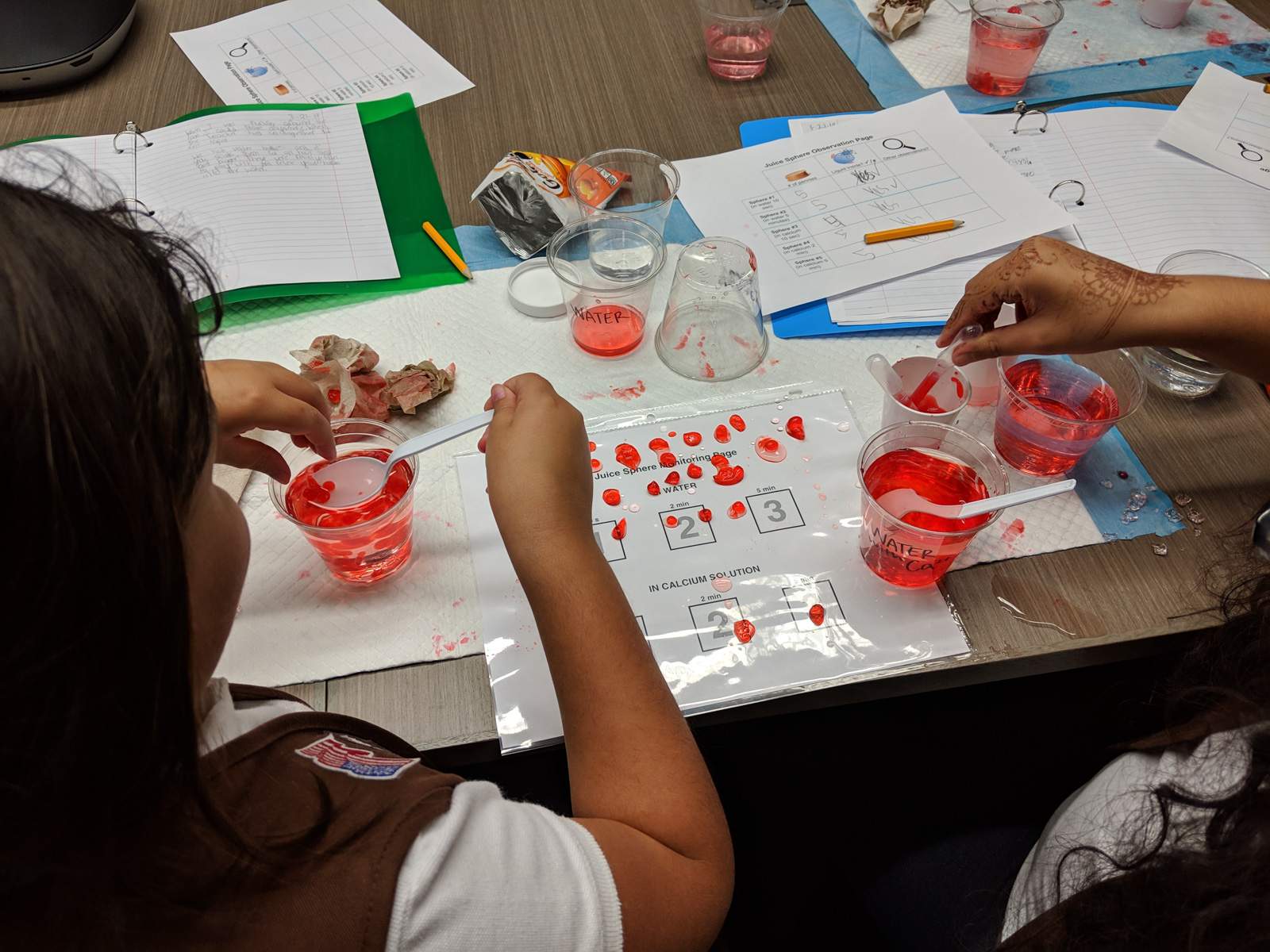 The education program at the California NanoSystems Institute paired a local Girl Scouts Brownie troop with graduate students to meet biweekly and conduct experiments that taught them about nanoscience. The program hoped to address the gender gap in STEM. (Courtesy of Meghan Horan)

UCLA graduate students paired up with a local Girl Scouts of the United States of America troop to teach the scouts about nanoscience over the past two months.

The education program at the California NanoSystems Institute, an interdisciplinary research center with a location at UCLA, paired a local Girl Scouts Brownie troop, composed of second- and third-grade girls, with graduate students. They met once every other week from February through early April to work on three experiments that taught them about nanoscience and the scientific method, said Rita Blaik, education manager at CNSI.

The second experiment looked at biogels, which are used by all organisms to carry out daily functions, Blaik said. The scouts learned how the structures of biogels keep the human body’s liquid contained at the nanoscale and maintain the body’s structure, she said.

The scouts did this on a much smaller scale and were able to measure the thickness of this monolayer, and thus the size of one molecule, knowing only the radius of the layer and the number of molecules, Blaik said.

The projects were run not only by the CNSI education staff, but also by female graduate students from various scientific backgrounds who volunteered for the meetings, Blaik said.

The program hoped to address the gender gap in STEM not only by providing female role models to the scouts, but also by using discovery-based learning to show the scouts they are capable of doing and learning about science, Blaik said.

“We tried to frame all the activities in such a way that they felt like they were discovering something, as opposed to just trying to teach them something,” Blaik said.

Sonia Luna, the executive director of CNSI, said CNSI was inspired to work with the Brownies by various prominent women in the sciences at UCLA. Luna said CNSI wants to challenge the misconception that girls are not good at science or math.

The collaboration aimed to promote young girls’ ongoing interest in science in an effort to address the gap in interest in STEM between boys and girls that begins at a young age, Blaik said.

“Girls start out having pretty equivalent interest in STEM as boys do, but as they get older, the gap widens,” Blaik said. “That’s unfortunate because the gap starts even in elementary school, which is oftentimes before they get any exposure to science at all.”

The CNSI education program decided to work with a Brownie troop because these girls are at the age at which the STEM interest gap begins to widen, Blaik said.

This was the first time CNSI had partnered with a Girl Scouts troop to bring these projects directly to a group of young girls, said Elaine Morita, an education program coordinator for CNSI. It was also the first time that the CNSI education team members worked directly with students, rather than just teachers.

“It was just as much a learning experience for us because we got to see how (the kids) interacted with things, how they got excited by certain things, or that other things were more challenging to understand,” Blaik said.

CNSI education program leaders will review the program over the summer to make plans for next year and hope to continue the program, Luna said.