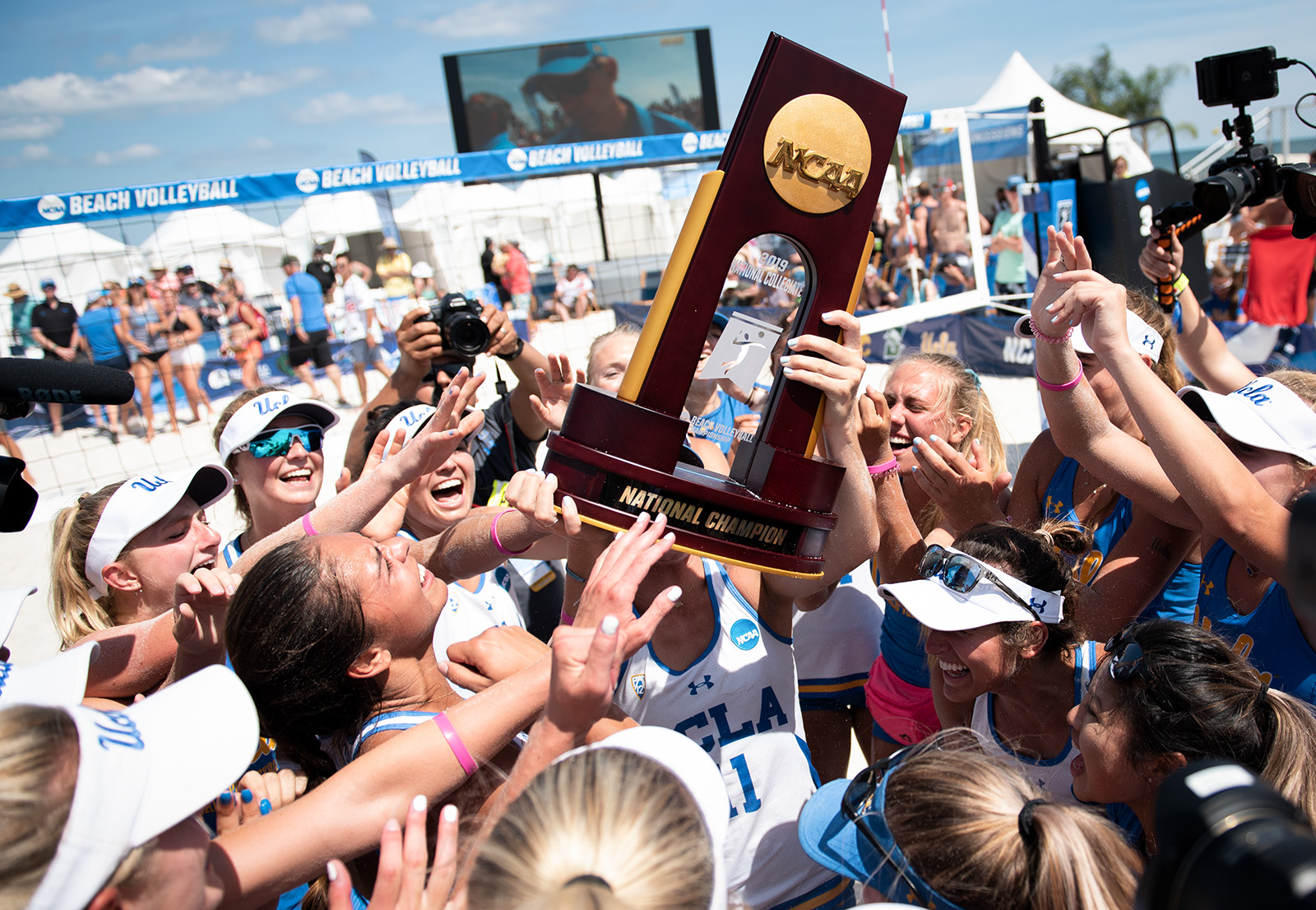 GULF SHORES, Ala. — Abby Van Winkle crouched down and slammed the sand after the ball hit the ground.

“I knew I was going to stuff (USC’s Alexandra Poletto),” Van Winkle said. “I needed to take revenge on her, because I got blocked a few times.”

Senior Zana Muno fell on top of the freshman for a hug as No. 2 seed UCLA (35-3) swept No. 1 seed USC (32-6) 3-0 on Sunday afternoon, earning the school’s 117th NCAA title. The Bruins bounced back from a loss in the Pac-12 championship last week to win their second consecutive national championship.

“Everybody rushed to our court and I heard people saying, ‘One more,’” Muno said. “I gave her a pretty easy serve because I wanted to be able to defend her since we did such a job on defense this week. We definitely knew (that we had dual point), and we were excited.”

Senior Izzy Carey and freshman Lindsey Sparks gave the Bruins their first point of the dual with a 21-16, 21-15 court five win that ended with Carey’s final career ace. The pair finished the season with a 13-match winning streak to finish 26-2.

UCLA took courts four and five against USC in last weekend’s Pac-12 championship – but lost on courts one through three in the second flight as the Trojans won the conference title.

“(We) come up short at the Pac-12 championship, where USC was playing great volleyball,” said coach Stein Metzger. “I have to hand it to this team because they really came together and came out confident. … The reason they were able to do that was because they have such a close bond.”

UCLA swept the first sets on courts one through three after senior Sarah Sponcil and junior Lily Justine came back from a 15-10 deficit to win 21-18 on court two. The duo led in the second set when the Bruins clinched the victory.

Seniors Nicole and Megan McNamara took the first set over Abril Bustamante and Tina Graudina – the pair that has handed the twins their only four losses of the season. The McNamaras won the first set 21-19, while the second was truncated.

Metzger said the weather in Gulf Shores worked in favor of the Bruins on Sunday.

“We have a different style (than USC) – we have to win with ball control and speed,” Metzger said. “Out here today, we had the advantage because the wind came up and our team was very excited about playing on an open beach with the wind.”

USC’s courts one, two and three were 20-0 after the Trojans fell to No. 8 seed Stetson in the opening round that forced them to play through the elimination bracket, but could not win a single set in the championship dual.

“Last year was our first national championship so it was special in that way,” Metzger said. “This year was special in that we have five seniors that have been with us and helped develop and build this program through their hard work and dedication. To see them go out like this is incredible.” 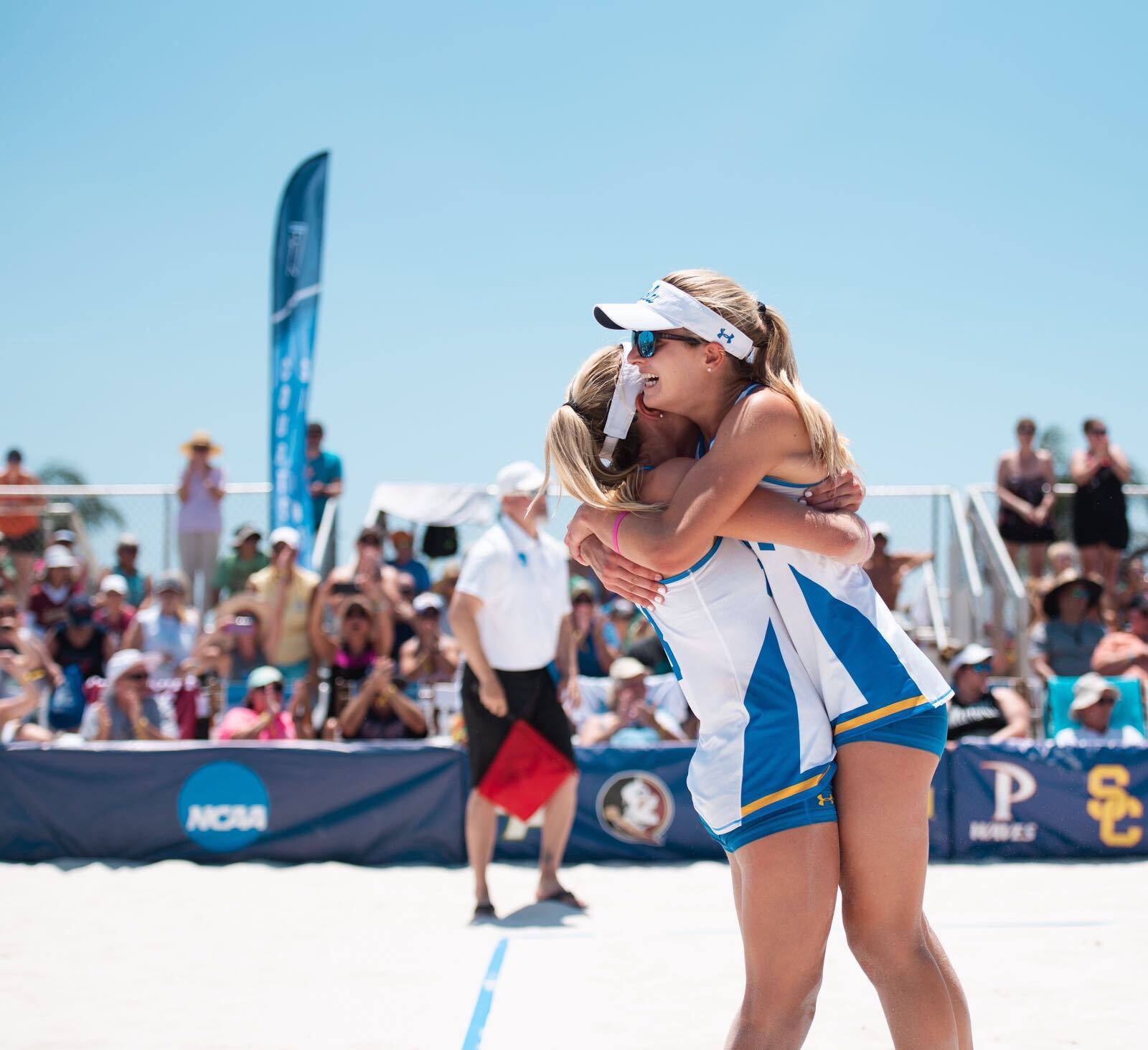 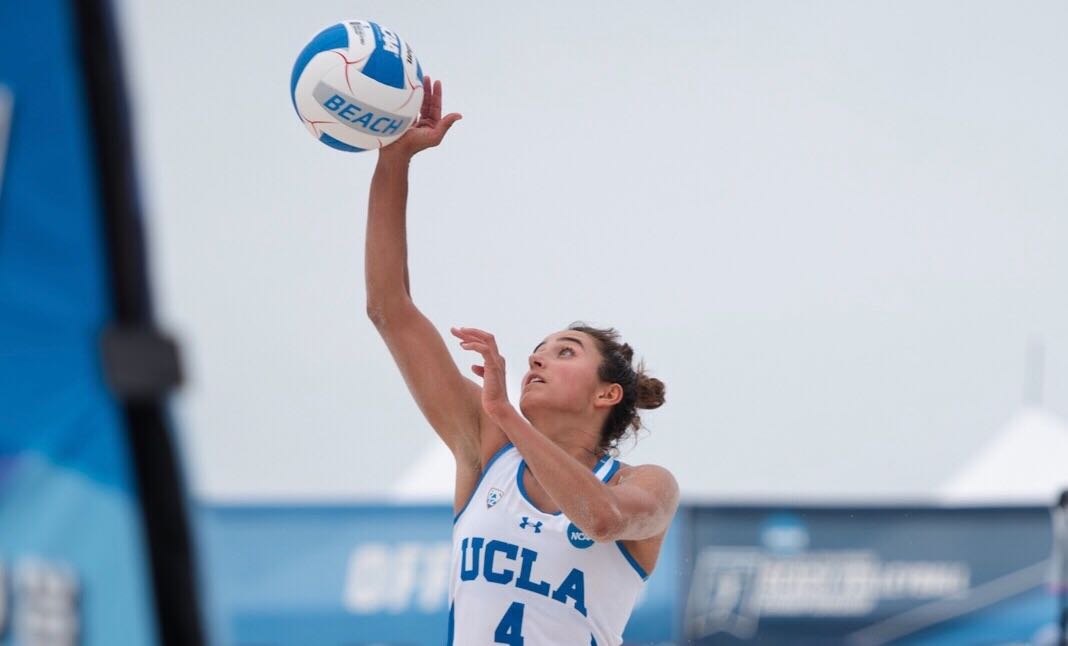