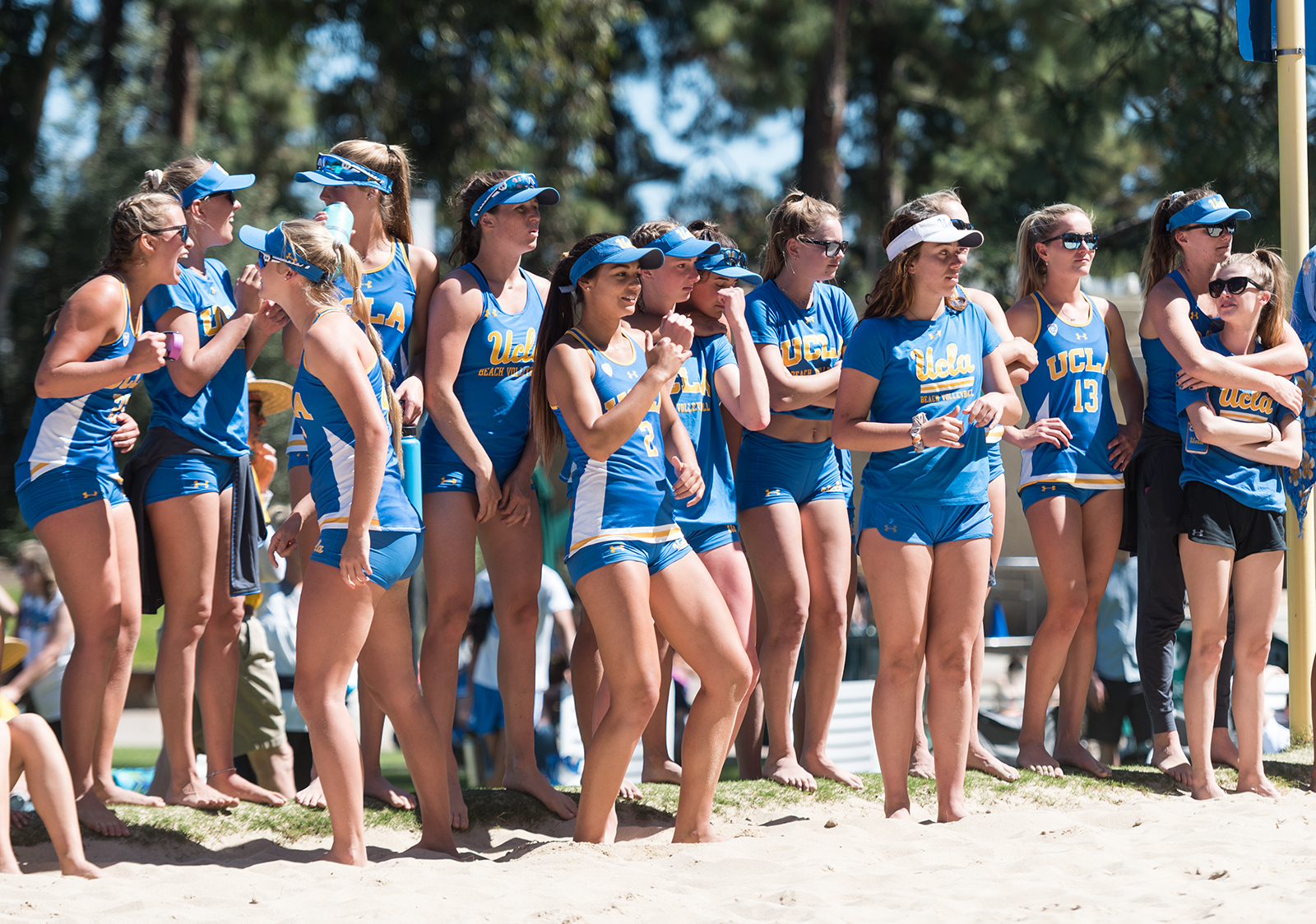 No. 2 seed UCLA beach volleyball will take on No. 7 seed Hawai’i in the first round of the NCAA championship. The Bruins – last year’s NCAA champion – will have the opportunity to bounce back from its Pac-12 championship loss to USC last weekend. (Alice Naland/Daily Bruin)

By Jack Perez and Jacqueline Dzwonczyk

No. 2 seed UCLA beach volleyball will have the opportunity to defend its national title in Gulf Shores, Alabama, this weekend. UCLA will face No. 7 seed Hawai’i in the first round of the NCAA championship at 9 a.m. on Friday.

No. 1 seed USC (28-4) will begin its quest for its third title in four years with a first round matchup against No. 8 seed Stetson on Friday.

The Trojans have won 12 straight contests, and they captured their third Pac-12 conference championship April 27 on their home sand.

USC has faced UCLA five times this season. The Bruins won the first two meetings, but the Trojans won the next three, including two wins in two days during the Pac-12 championship.

The Trojans could face No. 4 seed Pepperdine, one of just three teams they have lost to this season, in the second round.

No. 3 seed Florida State (28-5) will head to its fourth straight NCAA championship, with a match against No. 6 seed Cal Poly set for Friday.

The Seminoles come into the tournament with 12 consecutive wins, including winning a fourth straight Coastal Collegiate Sports Association championship, and have only lost to three teams all year – UCLA, USC and LSU.

Florida State finished as last year’s runner-up, falling to UCLA in the championship game 3-1. The Bruins and Seminoles faced each other twice this season, both games ending 4-1 in favor of UCLA.

The two will face off for the third time May 3 at 2 p.m. if both win their first round matchups.

No. 4 seed Pepperdine (20-9) will start with its lowest-ever seed at an NCAA championship.

The Waves have been seeded either second or third in the past three seasons, but they arrive in Gulf Shores after losing twice to then-No. 14 Loyola Marymount to lose the West Coast Conference Championship.

Pepperdine has faced UCLA three times this season and lost all three contests. This included a 5-0 sweep for the Bruins, which was the first time the Waves had ever been swept in the regular season in program history.

Pepperdine will start the tournament against No. 5 seed LSU. The Waves lost to the Tigers 3-2 in the East Meets West Invitational at Manhattan Beach, California, on March 9.

No. 5 seed LSU (29-6) will be competing in its third straight NCAA championship.

The Tigers claimed an at-large bid after falling to No. 3 Florida State in the finals of the CCSA championship.

UCLA and LSU have matched up twice this season, with the Bruins winning 4-1 on both March 9 and 29. The Bruin pair of sophomore Lea Monkhouse and junior Savvy Simo was the only pair to lose in both meetings.

LSU will face No. 4 seed Pepperdine first, a rematch of earlier this season, when the Tigers won 3-2.

No. 6 seed Cal Poly (25-10) will make its NCAA championship debut against No. 3 seed Florida State on Friday.

The Mustangs went undefeated at last weekend’s Big West Tournament to win their first-ever conference title and have suffered just three losses to teams outside of the top 10.

But the last time Cal Poly faced UCLA, the Bruins swept the Mustangs 5-0.

If the Bruins and the Mustangs win their first round matches, the teams will face each other Friday at 2 p.m.

No. 7 seed Hawai’i (26-9) will face UCLA in the first round of the NCAA championship.

UCLA faced Hawai’i once this season, sweeping it 5-0 on Feb. 27 on its home courts – but three of the five courts went to three sets.

The teams will play again Friday at 9 a.m.

No. 8 seed Stetson (29-8) will make its second NCAA championship appearance in program history.

The Hatters competed as the No. 8 seed in 2016 before being knocked out by the then-No. 4 seed Bruins. UCLA swept Stetson 5-0 at the FIU Surf & Turf Invitational in Miami earlier this season.

The loss was one of the Hatters’ eight on the season – with seven coming to top-10 opponents.

Stetson will face No. 1 seed USC in the first round Friday.