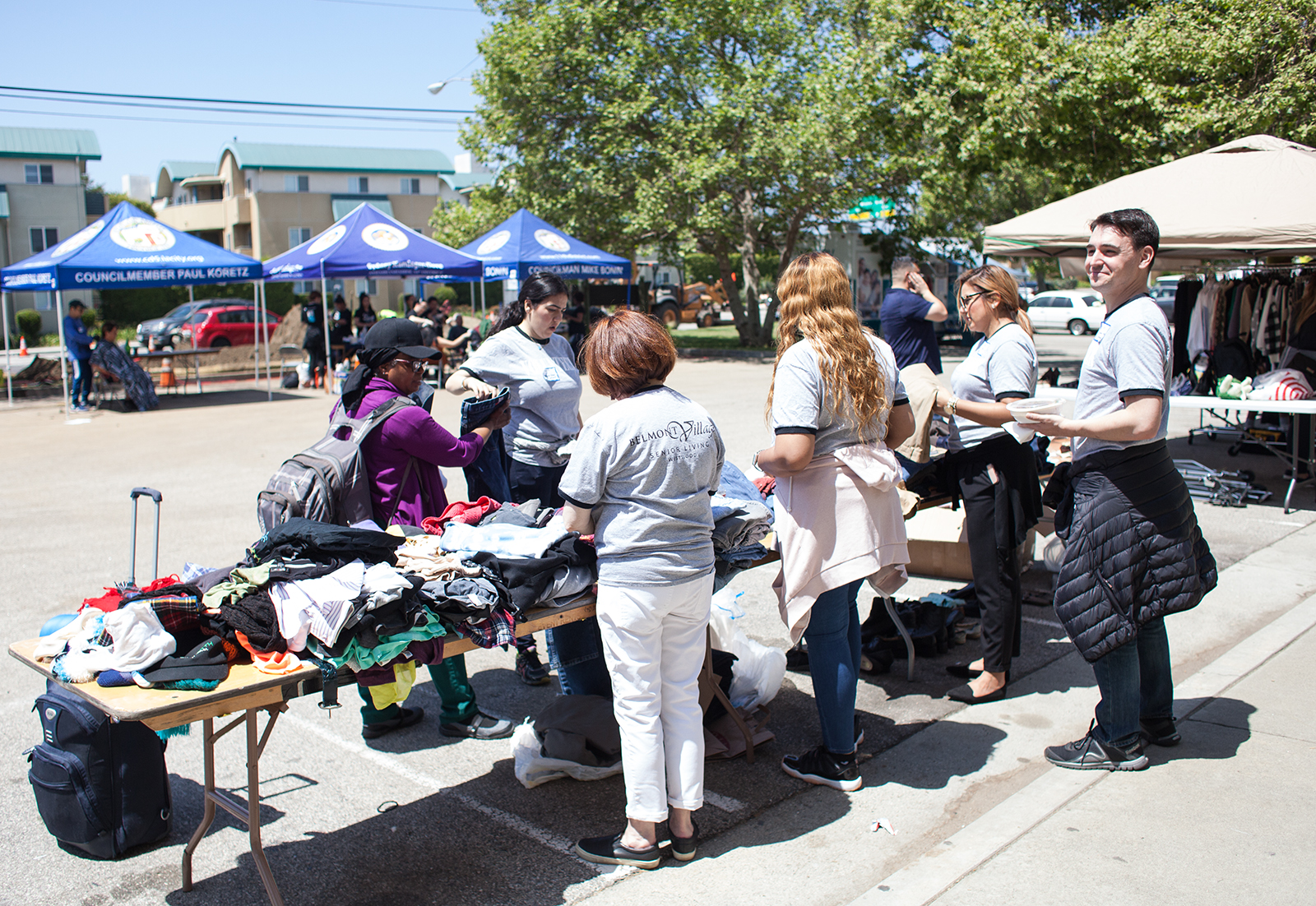 Members of Westwood and Los Angeles hosted a Connect Day at the Westwood Recreation Center on April 24 to help homeless people get access to essential services. (Mia Kayser/Daily Bruin staff)

Westwood Connect Day, held at the Westwood Recreation Center, featured over 40 city, state, county and nonprofit organizations that provided free services such as food, haircuts and clothing to homeless individuals. The event, the first to be held in Westwood, connected approximately 140 people to these resources.

The event was co-sponsored by several local government groups and officials, including Mayor Eric Garcetti and Los Angeles City Councilmember Paul Koretz, who represents Council District 5, which includes Westwood and its surrounding areas. Similar events were recently held in Encino and Los Feliz.

The issue of homelessness is too large for any one group to tackle, said Alison Simard, director of communications for Koretz’s office.

“We’re grateful for the services that are there,” Simard said. “It’s the coordination that’s tough. So when you have a center connect day like this it does help because it gives people a central place to go.”

Among the many services, attendees could get birth certificates and library cards, take showers and “shop” for donated clothes, including professional attire. Empowered Gifts, a project to help empower women through handbags and career assistance, offered a large selection of bags for homeless women and girls. Operation Blankets of Love, an animal welfare and emergency relief nonprofit, provided leashes and other supplies to homeless individuals and their pets.

Andrew Lewis, chair of the NWWNC budget committee, said despite the recent and contentious subdivision, both councils are coming together to address the issue of homelessness.

“Homelessness is one of those issues that goes beyond politics. It’s a priority for all of us,” Lewis said. “It has been a unifying issue of sorts.”

Lewis said the NWWNC aims to build bridge housing in the Village, which would provide temporary housing to homeless individuals until they find permanent housing. The council also contributed $1,500 to the event.

Lisa Chapman, president of the WWNC and co-chair of the Westwood Homeless Count, said she thinks residents of affluent areas like Westwood have a responsibility to help marginalized groups like the homeless.

“(I find) that a lot of times people say, ‘I want this situation to go away but I’m not really willing to help make that happen,’” Chapman said. “I feel a sort of responsibility that groups like the WWNC should be more involved in finding solutions to these issues.”

Chapman said she hopes the event will raise awareness of homelessness in the community. Chapman said the council aims to address homelessness by creating a permanent “street team” consisting of medical professionals who would directly provide services to homeless individuals. The WWNC donated $3,000 to the event and assembled hygiene kits with shampoo and other toiletries.

Josh Trifunovic, owner of Rocco’s and member of the NWWNC, said he wished more UCLA students would participate in events like Westwood Connect Day, and that he thinks holding future events closer to campus would increase student participation.

Chantelle Eastman, chair of the NWWNC homelessness committee, said she wishes Westwood would hold more events like Westwood Connect Day and that they could receive more funding from the city and county government for these events. Eastman said she wished the event could have received funds from Measure H, a county sales tax that funds mental health, substance abuse treatment, housing, education and other services for homeless individuals.

“We need to have this more frequently, from a monthly to weekly event,” Eastman said. “We’re looking at how can we do this without them.”

Individuals at the event said they appreciated the wide variety of services provided.

Julio Carrera initially came to the event to get vaccinations for his dog, but brought his father, who lives in his car, once he saw the number of services available. His father was able to get an identification card through the Los Angeles Homeless Housing Authority, which will help him obtain other services, Carrera said.

Virginia Bustamante, who lives in her car in Venice with her three dogs, heard about the event from her lawyer with Bet Tzedek, a free legal service that tabled at the event. She said she was happily surprised by the number of services available. Bustamante said the highlight of her day was socializing with volunteers and other attendees.

“I’m treated and spoken to like a normal human being, and not like someone who’s less than. It just lit me up,” Bustamante said. “I cannot tell you how happy I am.”