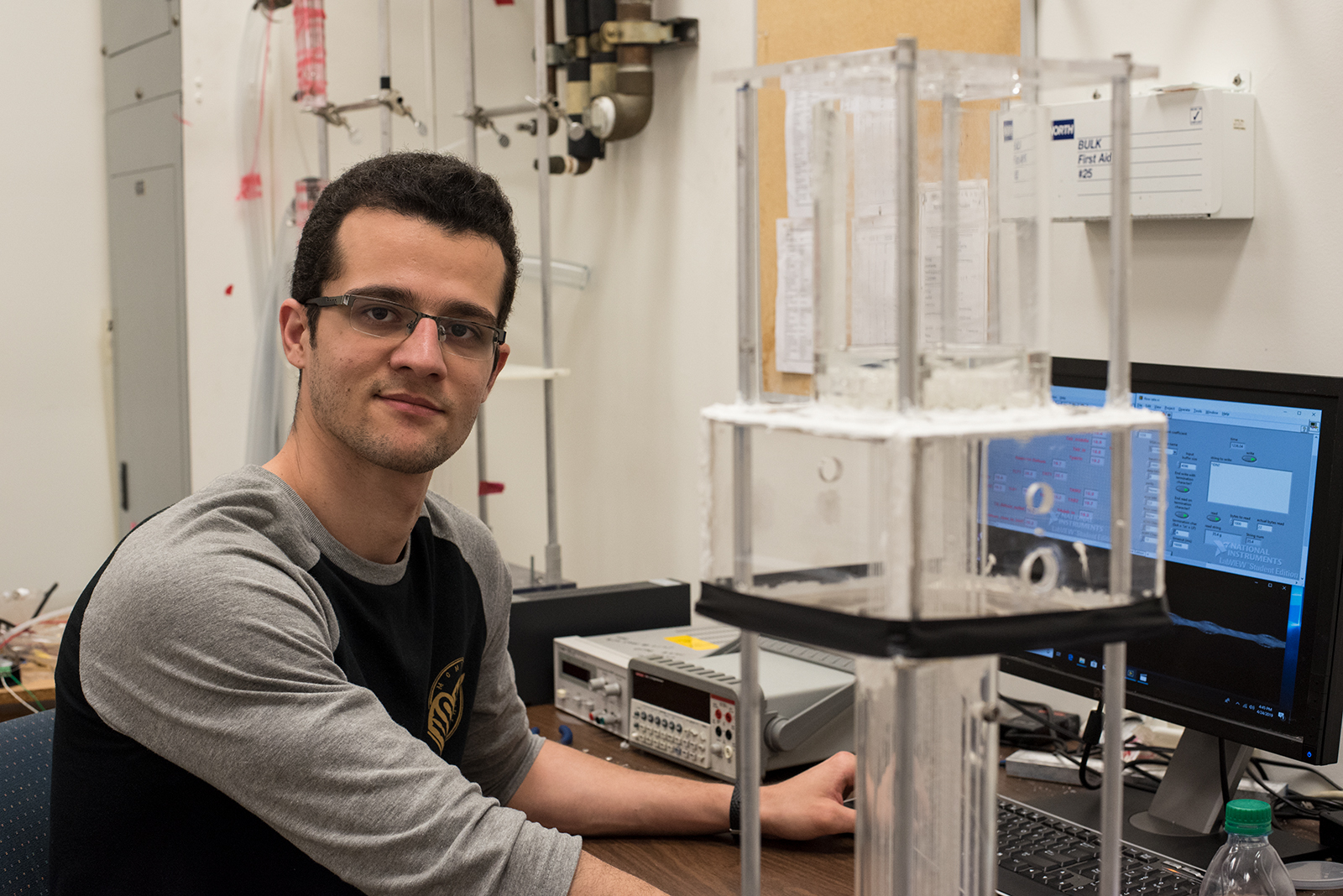 The study, published in the April issue of Science Advance, was led by Yongho Sungtaek Ju, a mechanical and aerospace engineering professor. Ju said he was initially awarded a grant from the National Science Foundation to create a system to cool power plants with dry air instead of fresh water. This system also happened to be efficient at collecting water vapor from the air and was later adapted for this purpose, Ju said.

The modified system, known informally as a multistring dehumidifier, runs water droplets downward along porous strings while funneling air upward. Abolfazl Sadeghpour, a mechanical engineering graduate student and co-lead author of the study, said the water droplets collect water vapor from the surrounding air as they travel down the strings.

“Each of these droplets actually works as one snowball, flowing down and absorbing all the vapor around it,” Sadeghpour said.

Sadeghpour said other dehumidifying systems that do not use strings are less efficient because the water droplets fall 10 times faster, giving them less time to collect water vapor. The use of numerous strings in close proximity allows the multistring dehumidifier to collect approximately 95% of the humidity in the air, Sadeghpour said.

“The problem is that the droplets are really fast … so those droplets don’t have time to capture the humidity around. But if you use a string, then you can capture them,” Sadeghpour said.

During early development, Sadeghpour said he and his colleagues were unable to identify a material for the strings that would allow the water droplets to flow down symmetrically. Then, they noticed that the porous nature of spiderwebs served as an effective model.

“We saw that spider webs can actually produce that really (symmetrical) drop of water around … (the) spider web , so the idea came from that. (We) actually use these porous fibers, similar to cotton fibers,” Sadeghpour said.

Navid Dehdari Ebrahimi, a co-author and mechanical and aerospace engineering graduate student, said the researchers also had trouble finding a suitable computer simulation to predict the device’s efficiency. The simulations were needed to predict how much water vapor could be captured based on the spacing of the strings.

“Especially in fluid mechanics, it is usually difficult to get a very exact match in the computer … and that was what we were looking for,” Ebrahimi said. “That was actually one of the biggest problems, the biggest challenges that we had.”

In addition to producing more efficient results, Sadeghpour said the multistring dehumidifier is more affordable in both manufacturing and operation. Many dehumidifying systems use cool, metal surfaces to condense water from pressured air, and Sadeghpour said the cost of metal sheets and high-powered fans give these systems a much greater overall expense.

“The only operational costs for (the multistring dehumidifier) is the airflow, one thing needed for all different devices,” Sadeghpour said. “It’s totally made of polymers and string, (and) they’re really cheap compared to metal surfaces.”

Ju said the multistring dehumidifier could potentially be used to alleviate California’s water crisis by aiding desalination, a procedure often used to remove impurities from seawater. Desalination mechanically replicates the natural rain cycle by evaporating untreated water, such as seawater, and then condensing the purified water vapor droplets. Ju said the device has a versatile range of uses due to its simplified design and portability.

“We have a lot of wastewater that we don’t use and just simply discharge into the river, and ultimately into the ocean,” Ju said. “We can treat that (water) and we can recycle that to maybe use in agriculture and other applications.”

In the U.S., approximately 39% of fresh water is used to cool the systems of power plants, Sadeghpour said. From that 39%, 3% is evaporated into the atmosphere annually. Sadeghpour said the multistring dehumidifier could be built on a larger scale to recycle some of that evaporated water.

“That’s a number that could provide for a couple million people … so to stop that, we can actually recapture this water,” Sadeghpour said.