Activists march through Westwood and UCLA to protest animal experimentation 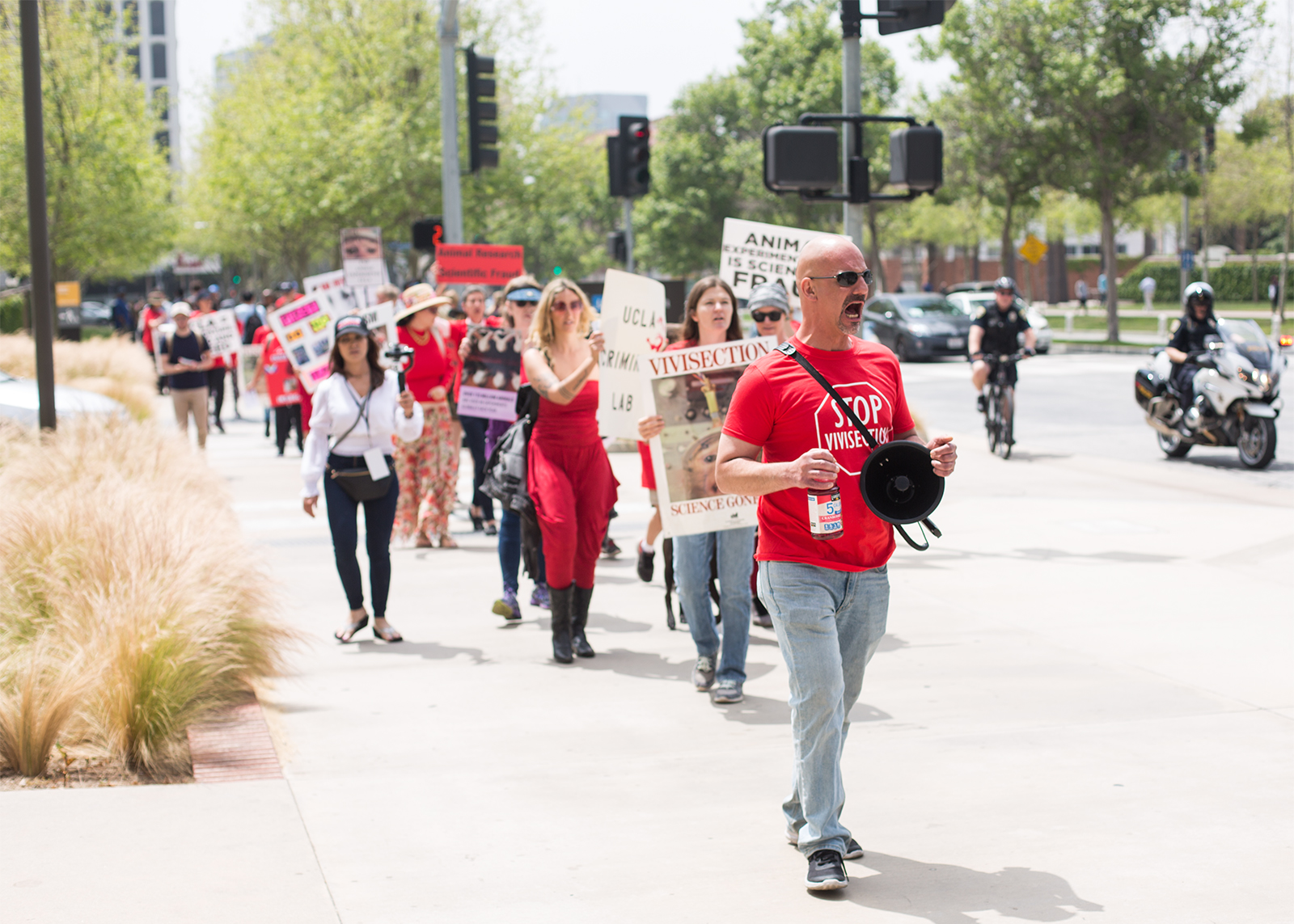 Animal rights activists walked from Westwood to UCLA to protest animal experimentation as well as Assembly Bill 700, which would further prevent the disclosure of specific information relating to researchers and their research at public universities and community colleges. (Alice Naland/Daily Bruin)

By Martín Bilbao and Armando Carrillo

About 40 people walked from Westwood to UCLA, before heading to Cedars-Sinai Medical Center, to protest animal experimentation as well as Assembly Bill 700. The bill, which is still in the Assembly Appropriations Committee, would further prevent the disclosure of specific information relating to researchers and their research at public universities and community colleges.

The protest primarily consisted of animal rights activists from two organizations, In Defense of Animals and People for Reason in Science and Medicine.

Julia Orr, co-organizer of the event, said AB 700 will prevent people from finding out if researchers have committed violations of the federal Animal Welfare Act, which regulates the treatment of animals in research and exhibition. Orr said they protested at UCLA because she believes UCLA has violated the act a number of times.

“When I get information from the freedom of information act it is already redacted and there is little pieces of information that you can get,” Orr said. “So basically if this legislation passes what I’ll get is a page of redacted (text) and there will be nothing on there.”

UCLA spokesperson Katherine Alvarado said in an email statement that research on animals has led to the development of life-saving procedures.

“Discontinuing all animal research would diminish hope for millions of people with AIDS, cancer, heart disease and other life-threatening ailments,” Alvarado said.

Alvarado added UCLA complies with legal regulations and is accredited by Assessment and Accreditation of Laboratory Animal Care International, a private, nonprofit organization that promotes the humane treatment of animals in science.

The protesters stopped in front of Kerckhoff Hall to hear speeches from animal rights activists. One speaker, Sydney Ross Singer, a medical anthropologist and member of the Good Shepherd Foundation, was scheduled to speak but did not attend.

Simone Reyes, animal rights activist and a star of the reality show “Running Russell Simmons,” said in her speech at the event that although activists have not stopped animal experimentation, they have the ability to show the reality of animal cruelty through social media.

“We are positioned to literally bring this revolution home. Our very secret weapon that we have to remember generations before us did not have is social media,” Reyes said. “We have now taken the power away from mainstream media.”

Reyes said she thinks circulating images and videos of animals being tortured will encourage more people to become vegan and advocate for animal rights.

“They are able to look into the eyes of animals who are locked in crates, who are screaming their way to the slaughterhouses,” Reyes said. “Finally, people can look at this and say ‘I don’t want to be a part of that.’”

Reyes said people need to speak to their legislators to push for laws that better protect the rights of animals. She added people need to show pictures of tortured animals to get people to listen.

“You can change their minds, but you got to crack their hearts open,” Reyes said. “Our biggest weapon besides social media are the eyes of those suffering animals.”

Participants in the protest said they were passionately against animal experimentation and that everyone has a right to know about the experimentation practices at UCLA.

Corinne Titus, a temporary assembly line worker, said she has protested against animal experimentation at UCLA since the 1980s.

“I’m very passionate about animal experimentation,” Titus said. “Both because it’s an animal rights issue and a human rights issue, because the information they’re getting from a different species is misleading to human beings.”

Alyson Burton, creative manager for IDA, described herself as an ethical vegan and took part in the protest against AB 700. She said she spoke to students on campus and thought they were uninformed about animal testing.

John Flores, a volunteer with IDA, said he joined the protest because he felt it was unjust to experiment on animals.

“The personal reason is to be on the side of justice and fairness, and to speak out against oppression with animals that have done nothing wrong, but just to live their lives,” Flores said.