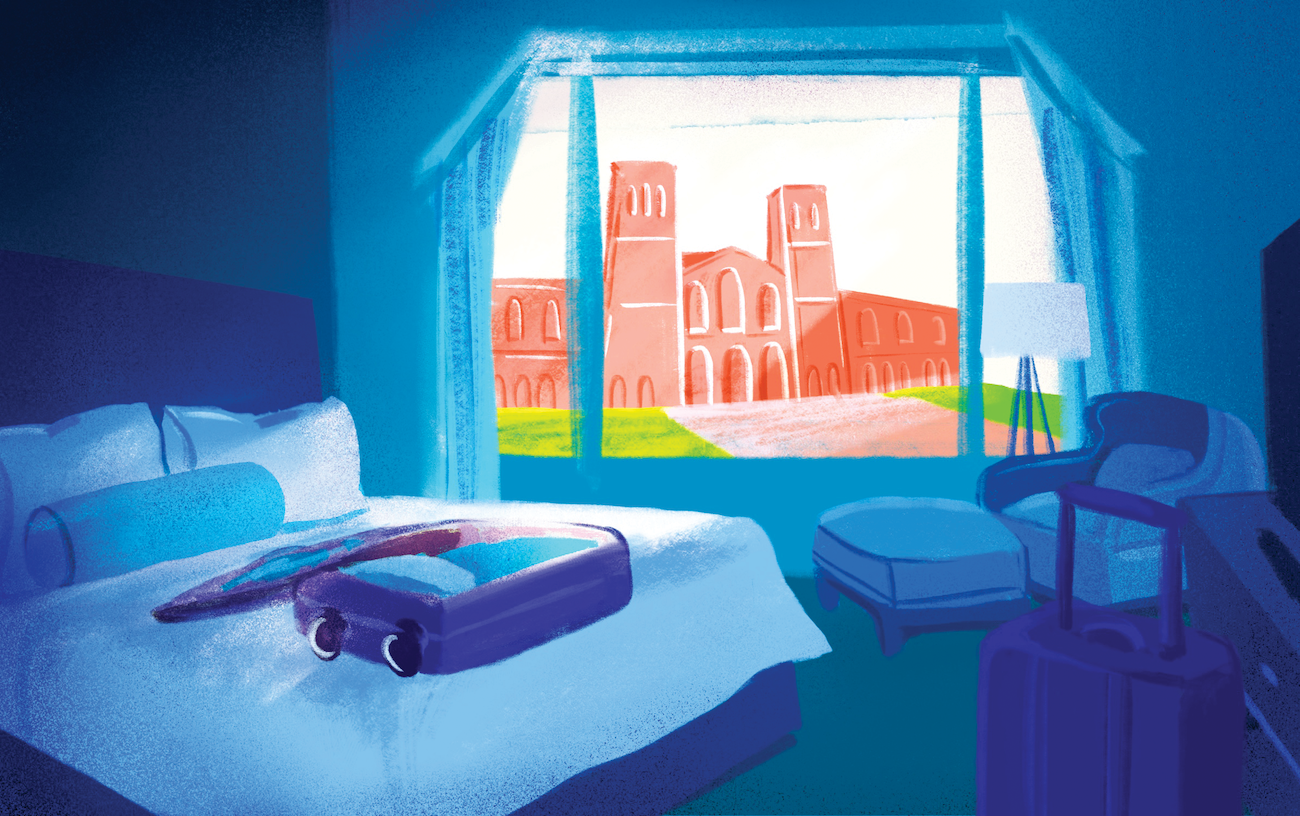 The nation’s top public university has a raging mental health crisis, an overcrowded and exhausted infrastructure, a student body reeling from loans and food insecurity and a distinct lack of resources for its nearly 100,000-person population.

Amid all this, UCLA somehow had the time to construct a hotel empire.

And it really is an empire.

And there’s more: The Luskin center, constructed for a whopping $162 million, has 254 rooms to serve conference attendees and UC visitors. But to call it a conference center is a bit misleading: 91.5% of the square footage is devoted to hotel rooms.

This classification, though, saves the university’s legal hide. According to the Westwood Community Plan, UCLA’s campus is zoned for public facilities. This zoning prohibits hotels. The university, however, avoided this scrutiny with its build first, ask questions later approach.

UCLA operates businesses, generates income and milks its identity as a university to avoid paying business-related expenses, allowing it to undercut Westwood businesses.

Put bluntly, while students are racking up tens of thousands in college debt, UCLA is raking in millions each year from its hotels.

Every hotel room sold in LA is subject to a 14% transient occupancy tax. Accordingly, hotels advertise rates plus tax.

Though UCLA operates four campus lodgings and conference centers, the university is a part of the UC system – a legal entity governed by the UC Board of Regents, which the city of Los Angeles cannot tax.

This allows UCLA to avoid paying taxes other hotels pay on a monthly basis. These taxes support LA infrastructure and services, like the fire and police departments, that spend so much time managing our student-related issues.

Typically most hotel guests do not qualify as tax exempt. Some guests are, though, due to the nature of their business. This includes diplomats; federal, state and local government employees; and university employees traveling on business. Nonuniversity hotels can grant tax exemptions to these individuals.

These exemptions are quite rare because nonuniversity hotels are held to a higher standard when granting these passes. LA city hotels must verify the identities and travel itineraries of their guests to sideline the tax, and must maintain these records for regular city audits.

UCLA, however, doesn’t always do this. The reason: Everything it operates is, somehow, university-related.

Consumers view this tax exemption as a discount because they are paying a smaller amount of money to stay at UCLA hotels than at nonuniversity ones.

All this puts nonuniversity hotels at a competitive disadvantage. In addition to avoiding the 14% transient occupancy tax, UCLA also doesn’t pay the 0.975% California tourism tax or the 1.5% tourism and marketing tax. This amounts to about 15.5% in taxes, all of which nonuniversity hotels cough up on a monthly basis.

This complete exemption is abnormal.

Universities in San Diego and San Francisco, for example, are required to pay the transient occupancy tax unless the university itself pays for guests’ rooms.

Hotels at other state universities, including the Indiana University’s Biddle Center and Conference Center and the University of Wisconsin-Madison’s Fluno Center, also pay hotel taxes for their guests.

In addition to avoiding the occupancy tax, the UC also manages to shirk income tax on its earnings from these businesses by claiming they are university-related.

Ricardo Vazquez, a UCLA spokesperson, said the revenue from the Guest House, Tiverton House and Luskin center does not classify as unrelated business income.

Essentially, UCLA is claiming here that this income cannot be taxed.

But UCLA’s mission as a public research university is to create, share and apply knowledge to improve society – not to build and operate hotels that cater to nonuniversity conference attendees.

In fact, the Luskin center has wandered so far from the UC’s educational purpose that it has trespassed on the territory of local hoteliers.

And UCLA had always planned to do so. Its 2009 market analysis, prepared by consulting firm PKF International, anticipated 35% of the demand for the Luskin center would come from noneducational, conference use. The report also projected that 40% of that demand – equivalent to 18,500 room nights – would be completely unrelated to the university.

Where were these guests staying before they had the Luskin center? Local hotels.

A wolf in sheep’s clothing

Benjamin Gunter studied at UCLA. Now, his alma mater is competing with his business.

Gunter, vice president and general manager of the Hilgard House Hotel and Suites in Westwood said the hotel competes for the same business as the Luskin center.

“People would rather everyone be subject to the same tax,” Gunter said. “It is seen as a competitive disadvantage to collect the 14% occupancy tax when some of our competitors are not forced to.”

The Luskin center’s own advertising makes it evident UCLA is trying to compete with local hotels for all business, not just university-related business.

Its March 8, 2018, email advertisement read, “If you are visiting L.A. or you are an Angeleno looking for a great place to stay-cay in L.A., book your room now at the fabulous new UCLA Meyer and Renee Luskin Conference Center and Hotel!”

“Start the holidays off bright by making the UCLA Luskin Conference Center your home base for enjoying all that L.A. has to offer this season,” it read.

These advertisements make no attempt to distinguish between university-related business and Angelenos looking for a “great place to stay-cay.”

But UCLA doesn’t stick to email advertisements. The Luskin center also seeks out customers on traditional hotel sites, such as Trivago and TiCATi. It receives sales leads from the LA Tourism and Convention Board and is listed on the LA Tourism website.

Clearly, the Luskin center is competing with nonuniversity hotels by marketing itself not just as a university hotel, but a high-end home base to explore the LA region.

Moreover, the visitors to these sites, who would otherwise have to verify their university affiliation, are seemingly only required to confirm they will visit UCLA at some point during their stay.

But “visitor” is a pretty broad term.

Are you a visitor if you walk across the street from the hotel room to the Henry Samueli School of Engineering? Can you simply swing by the Bruin Bear for a morning selfie before going about your Los Angeles holiday?

Compare this to the Berkeley Lab Guest House, where you must clarify your exact affiliation with the UC and provide the contact information of your individual UC Berkeley host.

The bar is even lower for conference attendees.

The Luskin center hosted, among other noneducational events, the 2017 America’s Connect conference run by the International Association of Conference Centres – a conference about how to hold conferences. It’s hard to imagine how any of UCLA’s nearly 45,000 students could have learned anything from this.

UCLA may be profiting but the neighborhood is not. Without the UC’s tax dollars, there’s less money to go toward infrastructure and municipal services.

“We have a lot of strain when it comes to traffic and congestion,” said Andrew Thomas, executive director of the Westwood Village Improvement Association. “Westwood Boulevard is essentially a highway to UCLA.”

California trusts the UC to use its funds for educational purposes. Los Angeles trusts UCLA to be a conscientious, contributing member of the community. And students trust administrators to provide for them.

Instead of building classrooms, the nation’s top public university is building hotels and lodges. Instead of tending to food-insecure students, UCLA is using its catering services for conference attendees. And instead of expanding its overburdened counseling center, the university is expanding its brand as a luxury destination.

Like a wolf in sheep’s clothing, UCLA is masquerading as a university as it preys on local hotels.

It’s almost like UCLA has forgotten what it means to be a public university.