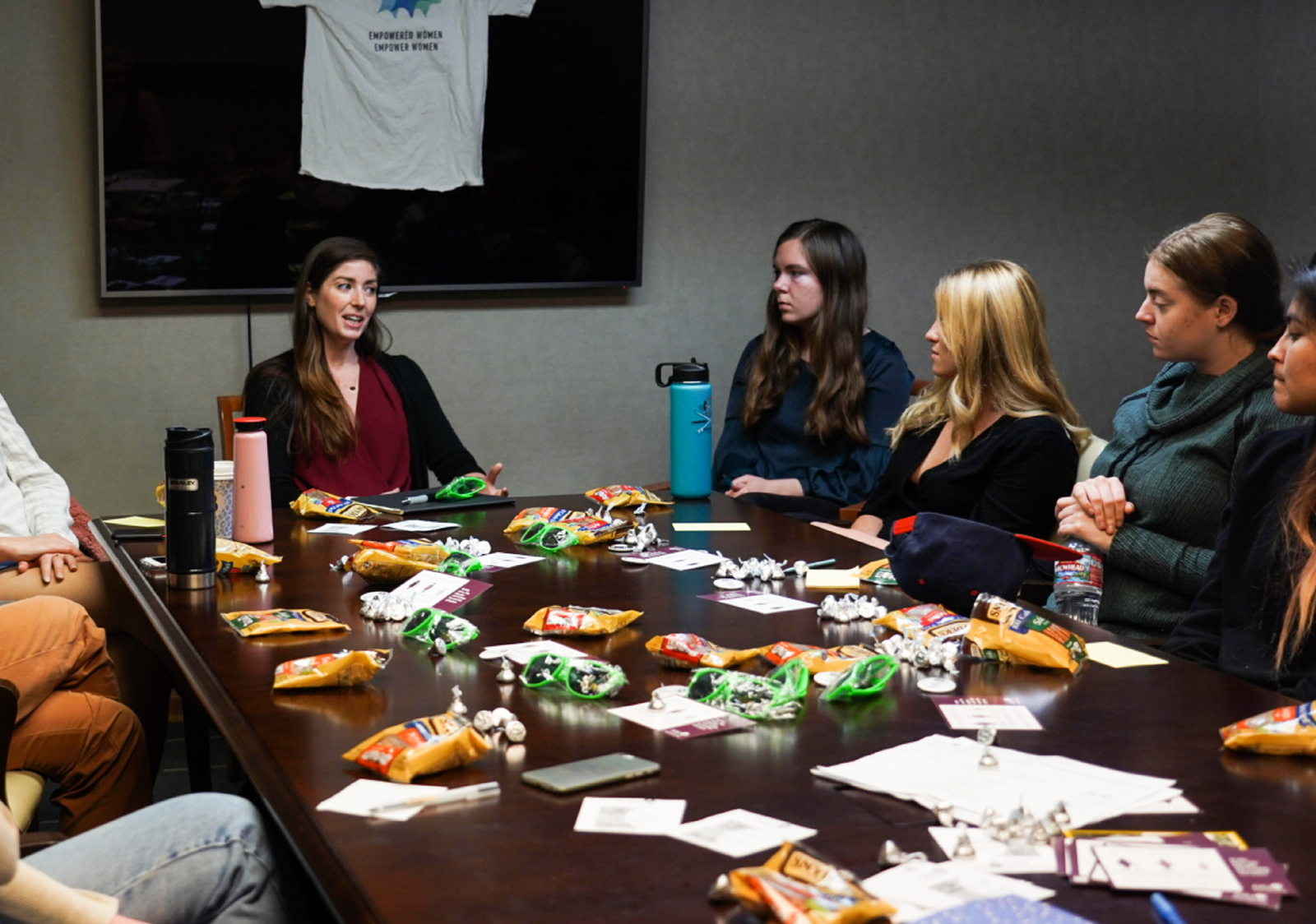 Ryan Hilliard, a graduate student in history at UCLA, (left) spoke at a conference hosted by the American Association of University Women at UCLA on campus Friday. (Elise Tsai/Daily Bruin)

Ryan Hilliard grew up reading “Dear America,” a series of novels written from the perspectives of young girls in different moments of history. However, throughout her academic career, she found a lack of historical literature written about or by women.

This made Hilliard realize she wanted to write more literature about women from a female perspective.

Hilliard, a graduate student in history at UCLA, spoke at a conference hosted by the American Association of University Women at UCLA on campus Friday. The conference, which focused on women in academia and the workplace, featured Carmen Rios, the digital editor of Ms., the first nationally circulated feminist magazine in the U.S.

AAUW is a group that focuses on empowering women and raising awareness of issues impacting women such as health and body image, said Mariah Furtek, a third-year geography student and president of the UCLA chapter of AAUW. Furtek is a Daily Bruin staffer.

Furtek said the goal of the conference was to make female students more comfortable about pursuing careers that may be traditionally male-dominated.

During the event, students anonymously asked about Hilliard’s and Rios’ careers and how to navigate situations in their respective fields that are unique to women.

The speakers spoke about handling sexism, being assertive and handling stress from academia.

Hilliard said when she was an undergraduate student, she was confused about what she wanted to pursue. She originally intended to be a lawyer and worked as a paralegal. However, she eventually realized her true calling was to pursue a doctorate in history.

“It’s been an interesting exercise to be able to reflect back on what I have learned and how I have grown and also what I wished I had known when I was going into academia,” Hilliard said.

Hilliard said she faced sexism when doing research abroad as one of the only women in her department.

She said when she gathered materials for her research in the library, male colleagues who passed through would question why she was there. One person in particular did not believe she could carry out her research on her own and frequently patronized her, confidently giving her incorrect instructions on how to complete her work.

However, Hilliard said she stood up for herself and asserted her place as a scholar and fellow colleague. She said this experience was pivotal to her development and helped her to build confidence in her abilities.

Rios said she graduated during the recession and was unemployed for a year after college. She eventually found work focusing in feminist advertising and publicity but realized she wanted an even larger role in activism. She said she wanted to make a difference and bring awareness to issues impacting women that may be overlooked.

This journey led her to her current role as the digital editor of the Ms. magazine.

Grace Hawkins, a third-year sociology student, said this was the first AAUW event she attended and that she would be interested in attending more in the future because she thinks they provide an open space for her to freely express herself.

“Usually when I talk about feminist topics, it’s very heated, so this was a pleasure of a feminist experience for me,” Hawkins said.

She said she learned a lot about entering higher education from the speakers.

“What I learned about graduate school was really insightful for me because I am intending to have my own journey into graduate school,” Hawkins said.

Hilliard said she thinks women should be encouraged to assert themselves and not be afraid to speak up in difficult situations.

“You deserve to have a seat at the table, and that’s what I want women to walk away with,” Hilliard said. “But I also hope they walk away with the knowledge and the approach they should make room at the table for other women.”