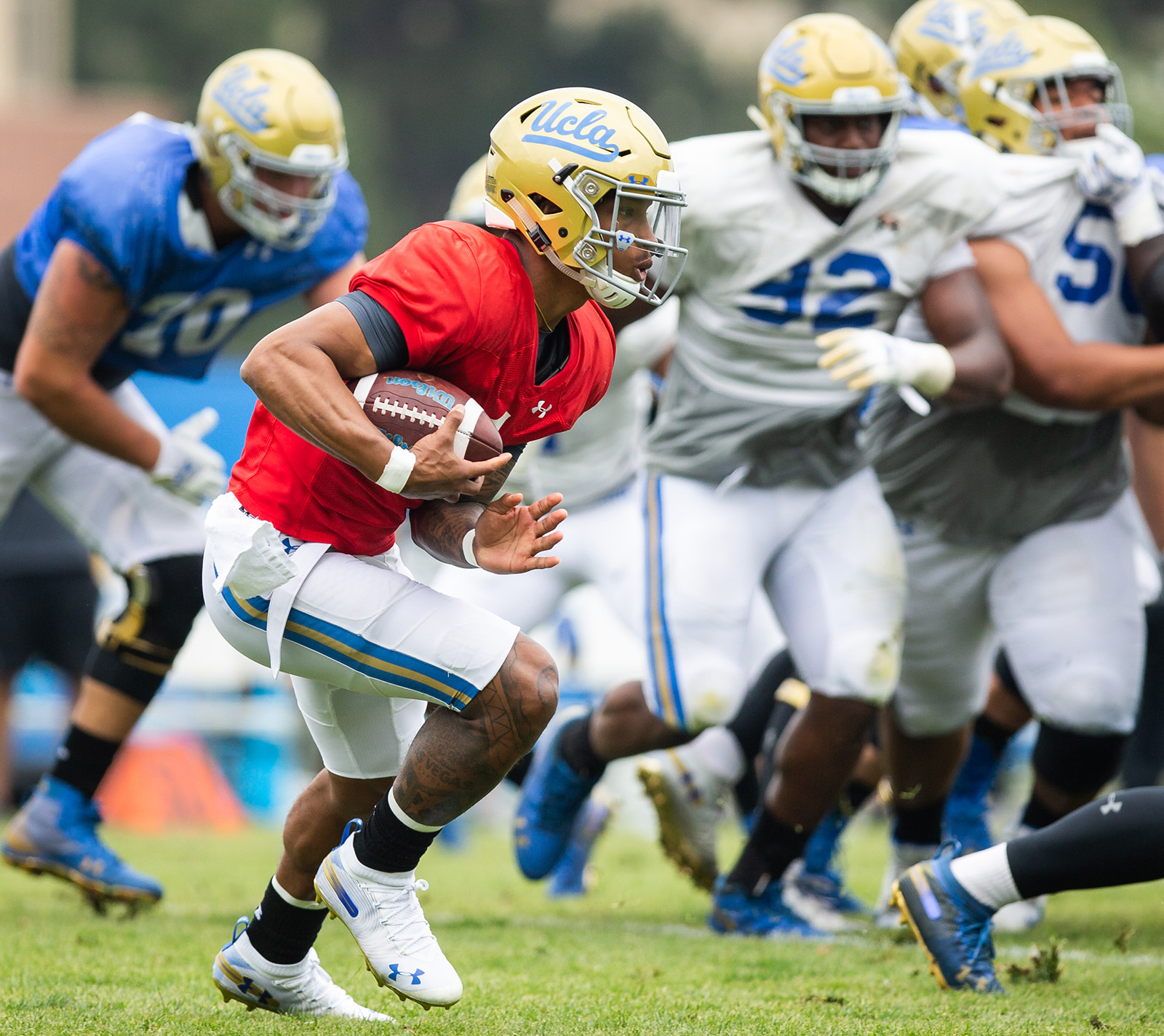 Rising sophomore quarterback Dorian Thompson-Robinson was 12-of-16 through the air in UCLA football’s annual spring game Saturday. Thompson-Robinson appeared in 10 of the Bruins’ 12 games last season and is expected to be the team’s starter in 2019. (Andy Bao/Daily Bruin)

Chip Kelly tried something new in his second spring game with the Bruins.

Team blue defeated team white 3-0 in UCLA football’s annual spring game Saturday. Kelly decided to set up an offense versus defense approach to the game since the Bruins were short on offensive linemen. The game lasted 60 minutes without any clock stoppages – like it did last year – but this time, nobody could find the end zone.

Rising sophomore quarterback Dorian Thompson-Robinson got the most reps under center, going 12-of-16 with 110 yards and a late red-zone interception. Rising redshirt sophomore Austin Burton – who led UCLA’s passing attack in 2018’s spring game – was 10-of-17 with 122 yards, while newcomer Chase Griffin was 6-of-9 with 55 yards.

“We don’t want him to stand back there like a store mannequin and just take the sack, so they’ve got to try to keep plays alive and that’s one thing that all three of those guys can do – they can extend plays with their feet,” Kelly said. “It’s a matter of the D-line doing a really good job and you’ve got to give them credit for it, but it’s also the quarterbacks learning how to manipulate and work in a pocket and when the pocket breaks down.”

Burton took three shots deep down the sideline in the game, with the first going to rising redshirt junior Demetric Felton. The 5-foot-9 wideout reeled it in in the end zone but took a step out of bounds and the pass was ruled incomplete.

The next deep ball by Burton was sent toward rising senior wide receiver Theo Howard, but the ball was swatted away by rising sophomore cornerback Patrick Jolly.

“In terms of DBs, those guys can cover,” Thompson-Robinson said. “I’m glad I have those guys on the other side to push me, so come Saturdays, I don’t have to go against them.”

Burton finally connected with incoming freshman wide receiver Jaylen Erwin on a 50-yard bomb on the final drive of the game.

“I knew I needed to complete one,” Burton said. “So (Erwin) ran a great route, stacked the receiver, and I just gave him a chance. … Ever since he’s gotten here, you notice his speed, he’s extremely fast.”

That play got the offense inside the 10, but back-to-back pass breakups by Jolly with time expiring kept the blue team from putting up a touchdown.

While all three quarterbacks were given time to shine, the position battle thinned out a bit over the spring.

“Last year we had (quarterback Wilton Speight) who was like, 50,” Burton said. “Now I’m the oldest one.”

Thompson-Robinson said he has really enjoyed having Lynch as a target and blocker, saying he was one of his favorite tight ends on the team.

The three quarterbacks still making throws also had another big change this offseason – a new chess instructor named Seth Makowsky who Kelly brought in specifically for the signal-callers.

“(Makowsky)’s worked with a couple professionals like Dwayne Haskins and a couple guys going into the (NFL) Draft and we’ve had about six or seven sessions with him,” Burton said. “Each piece or each move, you’ve got to calculate it because you’ve got to see where you’re being attacked and where you’re attacking someone. So when I’m on the field, it’s kind of the same thing.”

But when rising junior cornerback Darnay Holmes saw Thompson-Robinson with Makowsky, he couldn’t stay away.

“I’m like, ‘I know for a fact that (Thompson-Robinson) don’t know nothing about chess,’” Holmes said. “So I go over there, and I ask, ‘Can I … see that and set up a meeting with you one day?’ And then from there, we started playing chess.”

From chess coaches to position swapping to unique offense versus defense scrimmages, Kelly made a lot of changes this spring. Rising senior linebacker Krys Barnes said that was always the goal, and that the changes and improvements from March and April will help the Bruins take strides come August.

“Each and every day … we battle each other and battle with offense and grow with one another,” Barnes said. “It’s been good in going through (the) spring game. We had a really good knowledge of how we’re going to go out today and how we’re going to excel today, and I feel like it showed in every which way and form.”