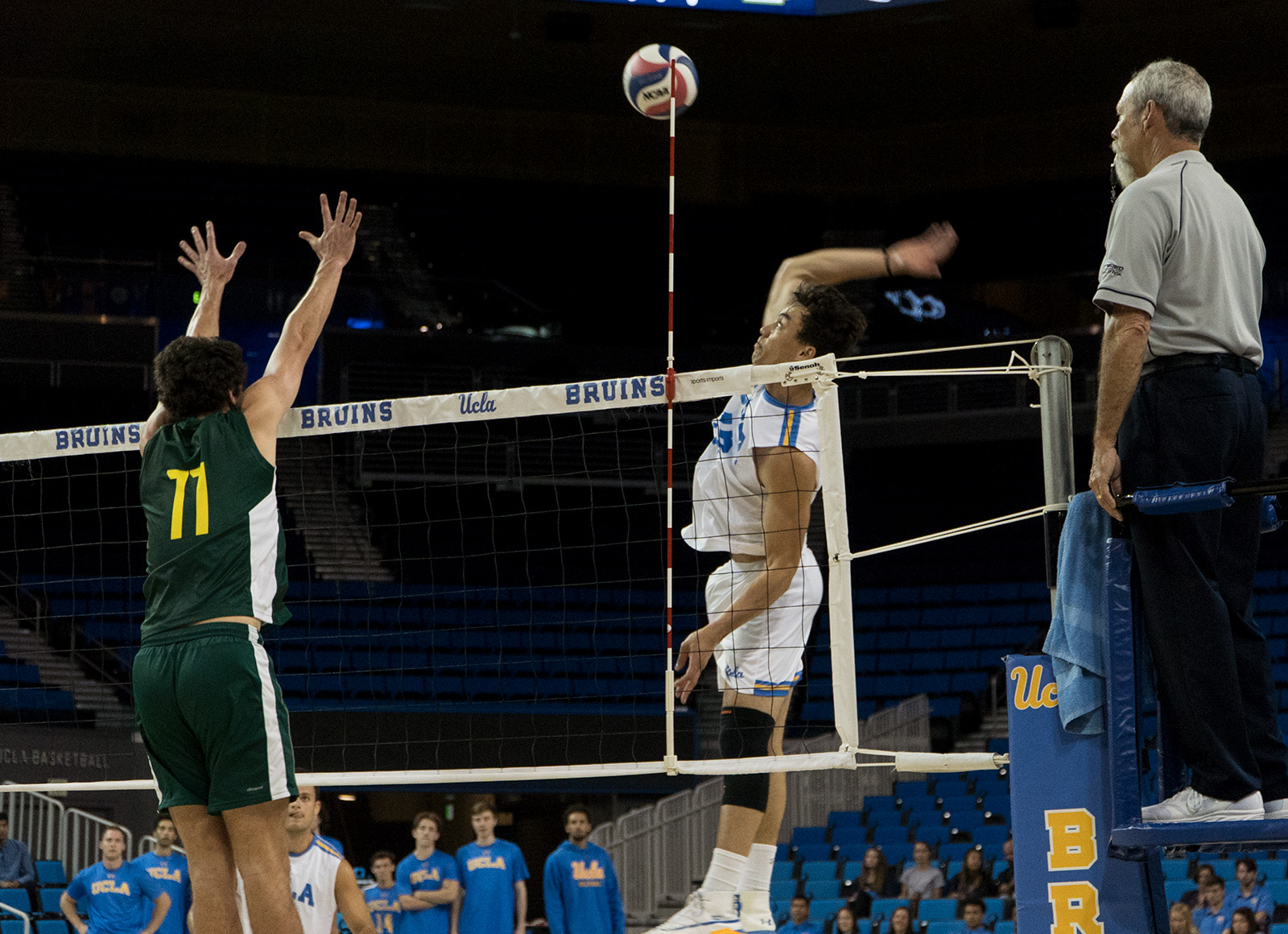 Senior outside/setter Micah Ma’a finished third in team kills against USC in the MPSF semifinal, with eight. Ma’a posted 29 assists and hit for .278 against the Trojans. (Xuxin Zhang/Daily Bruin)

The Bruins were two wins away from a conference title.

No. 2 seed UCLA men’s volleyball (19-9, 8-4 MPSF) lost to No. 3 seed USC (18-9, 7-5 MPSF) 3-1 in the semifinal round of the Mountain Pacific Sports Federation tournament Thursday at Pepperdine’s Firestone Fieldhouse. The Bruins would have automatically qualified for the NCAA tournament had they won the MPSF tournament championship.

“It’s no secret that we haven’t had great luck this year,” said senior outside/setter Micah Ma’a. “We didn’t complain about it. We just went and played as hard as we could. It was a good run.”

The Bruins advanced to 0-9 on the season in matches that they have posted a lower hitting percentage than opponents, as UCLA committed 22 attacking errors and were outhit by USC by .350 to .241.

Despite leading the Bruins in team kills this season, junior middle blocker Daenan Gyimah and redshirt junior opposite Brandon Rattray combined for 0 kills and a -.714 hitting percentage in the first set. The Bruins as a team also had a negative hitting percentage in the first set, posting a mark of -.083 versus the Trojans’ .130 en route to a 25-21 first-set victory for the Trojans.

The Bruins improved upon their first-set hitting percentage and hit for .200 in the second set, but the Trojans hit for .522 in the set and posted a 94% side-out percentage to take the set 25-18.

The Bruins opted for a lineup change in the third set, shifting Ma’a from outside to setter and replacing redshirt freshman setter Adam Parks with redshirt sophomore outside hitter Sam Kobrine.

The Bruins recorded a game-high side-out percentage of 76% in the third set and outhit the Trojans .382 to .355 to force a fourth set. But UCLA was unable to string together consecutive set wins and lost the fourth set 25-23.

“We tried to go back to a little bit more of the lineup that we had earlier in the year,” said coach John Speraw. “But (when) you start flipping around setters and all those types of things this late, it doesn’t bode well for your success.”

“It was a disappointing season,” Speraw said. “I feel bad for the seniors. They had an opportunity talent-wise to make another run at a Final Four, and it just wasn’t meant to be.”

Senior outside hitter Dylan Missry led the Bruins with 14 kills and Ma’a led the team with seven kills through the first two sets before being moved to setter. The duo have played together for the past four years and may have played their final collegiate match together.

Across their careers at UCLA, Missry recorded 585 kills and Ma’a posted 572 kills and 196 service aces.

The Bruins will await the NCAA men’s volleyball selection show Sunday to see if their season will continue.