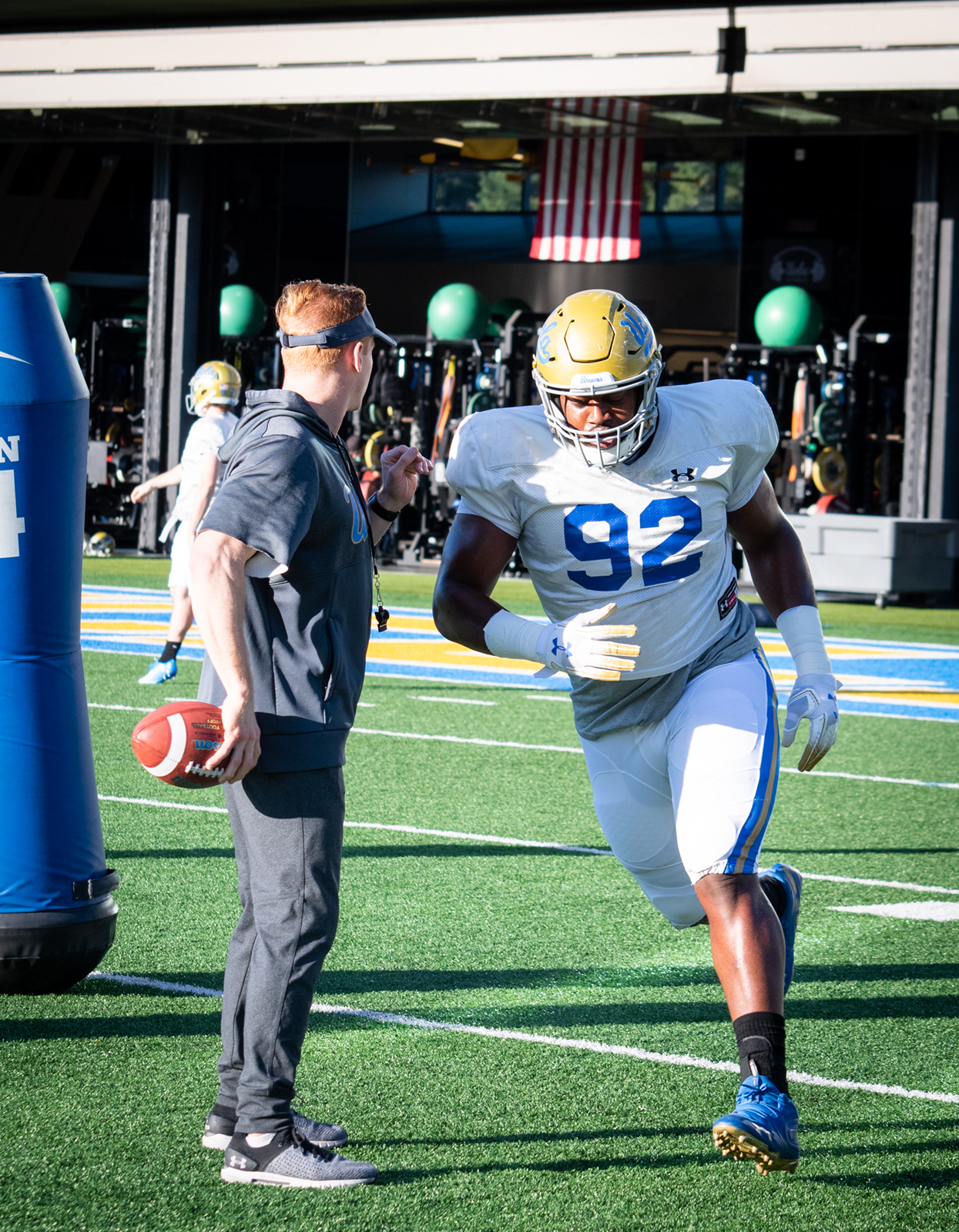 Rising redshirt junior defensive lineman Osa Odighizuwa picked up three sacks and six tackles for loss for UCLA football in 2018. The Bruins ranked 118th in the country in sacks with 15 across 12 games. (Lauren Mann/Daily Bruin)

The Bruins have pushed themselves this spring.

Saturday will mark coach Chip Kelly’s second spring game with UCLA football, and the first time he’ll be running one with athletes who have played a full season under him. Kelly said with that experience, the entire team has been able to come together and enhance their training.

“I think the group as a whole has improved,” Kelly said. “It’s year two in our system, so I think their grasp of what we’re trying to get accomplished has increased, their knowledge of the game has increased.”

Coming off of a 3-9 season last year in which the Bruins finished fifth in the Pac-12 South, there was room for improvement – especially with their pass rush.

Rising redshirt sophomore defensive lineman Odua Isibor completed just one sack as part of the UCLA defense that finished the 2018 season ranked 118th in the nation with 15 sacks. Isibor said getting the pass rush back on track could mean a world of difference for the Bruins on the defensive side of the ball.

“We’ve definitely elevated it and gotten better. … It’s going to take a lot of pressure off our (defensive backs),” Isibor said. “They’re really solid and they’re doing their thing, so if we can get our pass rush going, I think we’ll have more of a complete defense.”

With UCLA having the fourth-largest percentage of underclassmen in the country last season, Kelly said that he will be looking for upperclassmen to direct their less-experienced peers – a role that rising redshirt junior defensive lineman Osa Odighizuwa has taken on for the defensive line. Odighizuwa played in 11 games last season and started the final eight, collecting three sacks and six tackles for loss – tying him for third most on the team.

“He’s the real veteran,” Kelly said. “(Odighizuwa’s) the oldest of that group. He’s got an unbelievable work ethic and a great motor, so he kind of sets the tone from an effort standpoint for those guys, and they all follow his lead.”

The defense has been practicing without one of their leading pass rushers from last season in rising redshirt senior linebacker Keisean Lucier-South, who has not played in most of the spring practices and won’t appear in Saturday’s scrimmage – choosing instead to focus on his academics this quarter. Lucier-South led the team in tackles for loss and sacks last season with 11.5 and 4.0, respectively.

“We’re just working harder, more reps,” Isibor said. “We just need to focus on what we’re doing, and (Lucier-South)’s going to get back to us when he’s done with what he’s doing.”

Thompson-Robinson is currently considered the favorite for the starting job after playing in 10 games last season, but Burton and incoming freshman Chase Griffin have forced him to work harder for the starting spot.

Despite the improvements he’s seen the Bruins make over the last few weeks, Odighizuwa said the team needs to remember that practice is ongoing and there needs to be continued improvement in all areas of the game.

“I feel like I’ve made good strides, but it’s definitely not where I wanted to be,” Odighizuwa said. “Coach (Kelly) always talks about being obsessed with improvement, so it’s not something that I could ever be satisfied with.”

The spring game will take place Saturday at 11 a.m. at Drake Stadium. 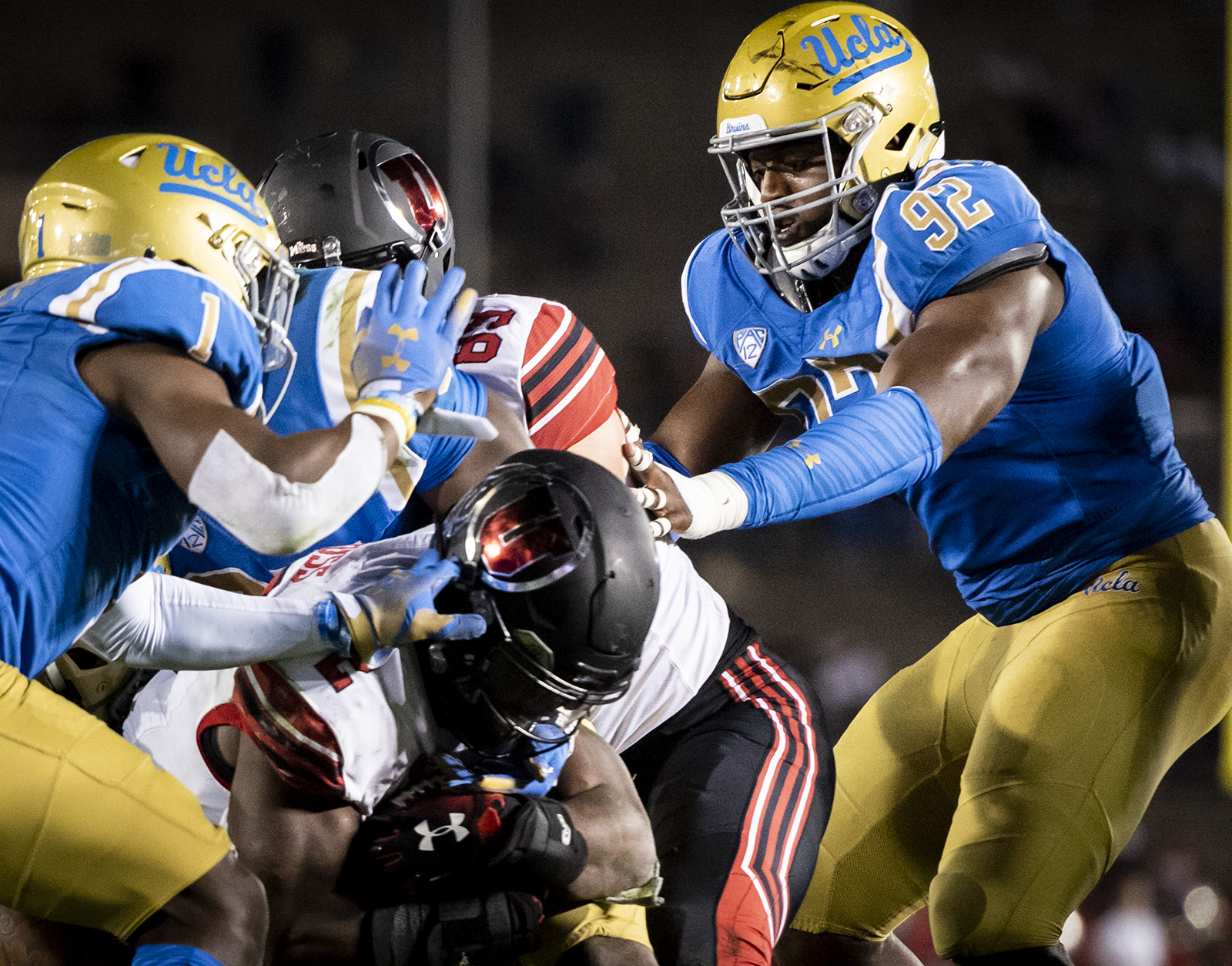