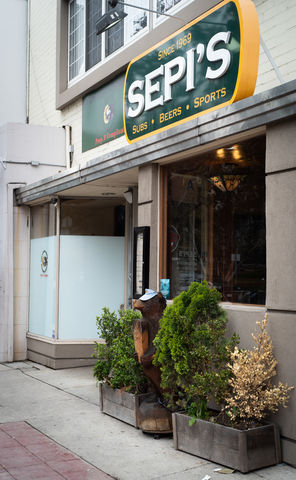 Sepi’s, a sports bar in Westwood, will be closing at the end of the month. (Daily Bruin file photo)

Sports bar Sepi’s will close its doors at the end of the month after 50 years in Westwood Village.

Kifishia Kawachi, owner of Sepi’s, released a statement Tuesday announcing the sports bar’s closure. The statement did not specify why Sepi’s was closing, but said it has spent the last few years attempting to relocate in order to stay open. According to the statement, Sepi’s was unable to find a new location due to permitting issues and pushback from a specific community member.

The statement did not name the community member but explained that the governance structure of Westwood makes it hard for businesses to develop in the Village.

Andrew Thomas, the executive director of the Westwood Village Improvement Association, said this prevents the sports bar from being able to easily relocate to other areas in Westwood which have already reached their full capacity for fast-food restaurants. The association, which is a nonprofit organization tasked with improving the state of Westwood, is combating a 16% vacancy in the Village, Thomas said.

“If the reasons we can’t (relocate) are because of regulations that somehow value vacancy over a business that has been in our community for decades, then the regulations need to be changed immediately,” Thomas said.

The statement said a Westwood community member protested the sports bar’s alcohol license application when it was trying to relocate, contributing to making it too difficult to do so. Although Kawachi did not name the individual involved, Thomas identified the person as Steven Sann, the chair of the Westwood Community Council.

Thomas added he thinks Sann is abusing the public process for halting the approval of liquor licenses in order to hold the business hostage.

“It’s him, it’s always him,” Thomas said. “Every alcohol appeal, every fight to the area planning commission, it’s always the same person or one or two friends that also appeal everything.”

Sann said he never filed an appeal against Sepi’s. Sann said he, in fact, filed a letter of conditional support on the liquor license application filed by Sepi’s.

He did not specify what conditions he listed in the letter. However, he said one example of a recommended condition was that Sepi’s should restrict people under the age of 21 from entering the establishment during UCLA sporting events at the new location, similar to rules in place at the current location.

Zahra Hajee, a fourth-year psychobiology student and member of Westwood Forward, a coalition of students and Westwood stakeholders, started a petition demanding that Sann drop the appeal intervening in the sports bar’s alcohol license application. Nearly 2,000 people have signed the petition.

Hajee said she wanted to show support for Sepi’s and spread awareness of Sann’s appeals against the sports bar and other businesses in Westwood.

Sann said he thinks the petition was slanderous and filled with falsehoods.

Thomas said he thinks Sepi’s was an iconic part of Westwood for decades.

“I am just profoundly sad about the whole thing,” Thomas said. “It defies logic.”