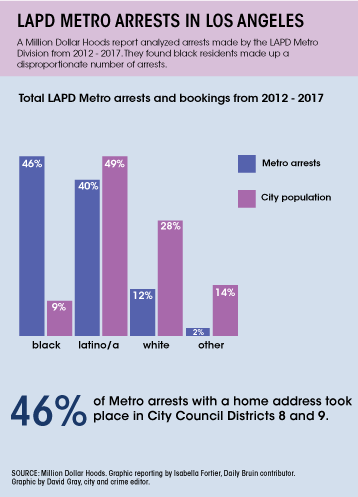 An elite division of Los Angeles’ police force arrested a disproportionate number of Black residents from 2012 to 2017, according to a UCLA report.

The report was released by Million Dollar Hoods, a project which analyzes policing and mass incarceration in Los Angeles.

The UCLA researchers found that while Black residents comprise just 9% of LA’s city population, they made up 46% of all LAPD Metro arrests and 31% of all LAPD arrests.

The report found the most common charges against residents were failure to appear in court and possession of controlled substances.

Metro is an elite division of LAPD, created in 1933, that houses the K-9, Mounted Unit and Special Weapons and Tactics. Homeless individuals made up 19% of LAPD Metro arrests.

While LAPD Metro operates in all 15 city council districts, over 46% of arrests with a home address were in City Council Districts 8 and 9, commonly known as South LA.

“The community often has seen (LAPD Metro) as a hammer,” Bryan said. “What our report shows is that despite having jurisdiction over the whole city, they seem to only be operating in South LA.”

Bryan said the new report was published partly in response to a recent Los Angeles Times article that alleged that LAPD Metro stopped Black motorists at twice the rate of other LAPD officers.

“When I went to a community meeting recently, a lot of community members were citing our report when they were talking with the (police) chief,” Patlan said. “They were saying, ‘Hey, this is what we see on the ground and we have these numbers to back our narrative, to support what we’re trying to say.’”

Patlan said he thinks the conclusions of the report question the effectiveness of LA’s approach to reducing crime.

“It begs the question, how do we best work towards reducing crime in LA? Is it increasing policing or is it by diverting resources to community programs or mental health services, (or)

Turner said breaking down the costs of incarceration helps community organizations to lay out alternatives to current policing practices. By outlining the current use of public funds, Million Dollar Hoods helps communities demonstrate to public officials the already existing resources that can be redirected to alternatives to mass incarceration and policing problems, Turner said.

Million Dollar Hoods estimated the minimum cost of all LAPD Metro incarcerations was $8,040,953, including $3,722,029 just for the jailing of Black residents.

Patlan said he thinks UCLA students could have a tangible impact on their community.

“Where we are at UCLA, in West LA, we’re not as impacted as South LA, but we’re still a part of the community,” Patlan said. “And as a research institution that has the power and the resources to do this kind of work, it’s very important for students to realize that this is something they can do that makes a difference on the ground.”