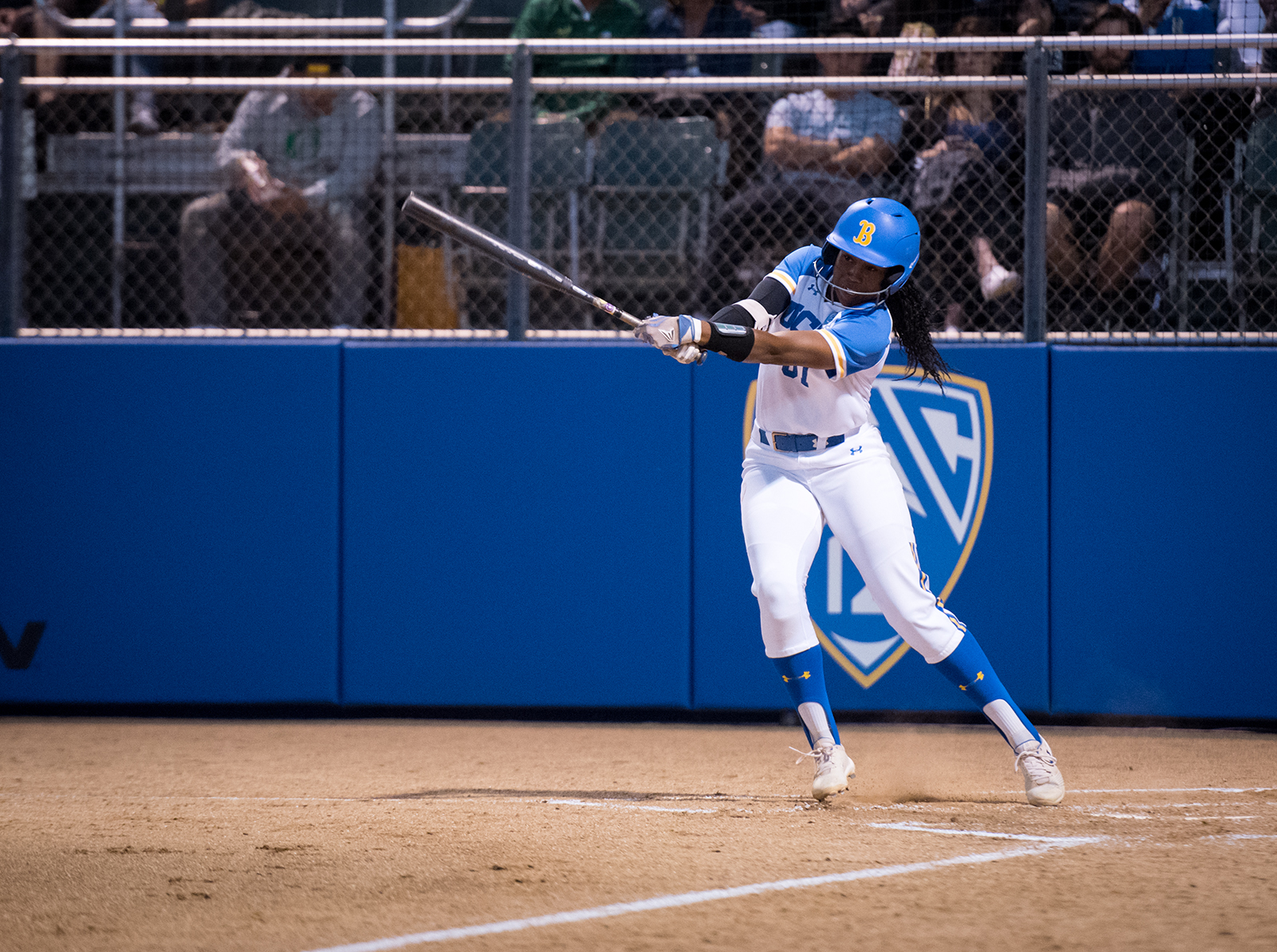 Sophomore utility Kinsley Washington is starting at second base for the first time in her collegiate career this season. At the plate, Washington is hitting .288 for UCLA softball. (Ashley Kenney/Daily Bruin)

This year, No. 1 UCLA softball (37-2, 11-1 Pac-12), has used sophomore utility Kinsley Washington at second, displaying what coach Kelly Inouye-Perez has been emphasizing all season – versatility.

“I’m proud of how unfazed and confident this team is,” Inouye-Perez said. “The fact that we can be as successful as we’ve been this season with the versatility we’ve had to show says a lot about the players that we are recruiting. We’re recruiting great athletes that work hard in a lot of different positions and situations.”

Washington, who was a shortstop in high school, is starting at second base for the first time this season and in her collegiate career.

In the top of the fifth inning in the Bruins’ 8-1 win Sunday, Washington made a play that prevented Oregon from tying the game.

The Ducks had runners at the corners with one out and tried to intentionally get caught in a rundown in between first and second base, hoping UCLA would lose track of the runner at third. The cardinal rule on defense – which players have been taught about since their days in little league – is to not let the runner from third score.

In the rundown, Washington never took her eyes off the lead runner, squaring her shoulders toward third base and sidestepping her way toward first to force the runner back to the bag. She had the ball at shoulder level, ready for a quick throw to the plate if necessary.

Both runners had no choice but to go back to their respective bags because of Washington’s play, and the Ducks’ plan of relying on the Bruins to make a mistake failed.

“It’s not easy when you get taken out of a position at this level,” Inouye-Perez said. “We’ve had versatility when we needed it, and (Washington) is a great example of somebody doing whatever it takes to help this team.”

Inouye-Perez said versatility is not only apparent within the starters, but along the bench and inside the circle as well.

Sophomore infielder Malia Quarles has had two pinch-hit home runs in the last two series. In the finale against Oregon, she came to the plate with the bases loaded and hit a grand slam that towered well over Easton Stadium’s scoreboard in left field.

Quarles said she is always focused and ready for when her number is called.

“I just try to focus on what’s happening the whole game,” Quarles said. “I always talk to my teammates and ask them where the pitcher is pitching and what the speed is like. That really gets my mind right knowing what I need to know so I can focus when I’m in the box.”

All three starters on the pitching staff have come in for relief throughout the season. The Bruins used two pitchers both in Friday’s loss and in Sunday’s win – something that hasn’t happened all that much as the staff has totaled 25 complete games so far this year.

Redshirt junior pitcher Rachel Garcia said the relationship with the other pitchers, as well as how they work with assistant coach Lisa Fernandez, helps the staff get locked in for every situation.

“Our mentality is that we’re all starters and closers, and we all have each other’s backs,” Garcia said. “On Friday, it was awesome to see (Faraimo and Azevedo) work together and then myself and (Azevedo) in the finale. We’re all in constant communication, and it’s just a great staff to be a part of when all of our roles are the same.” 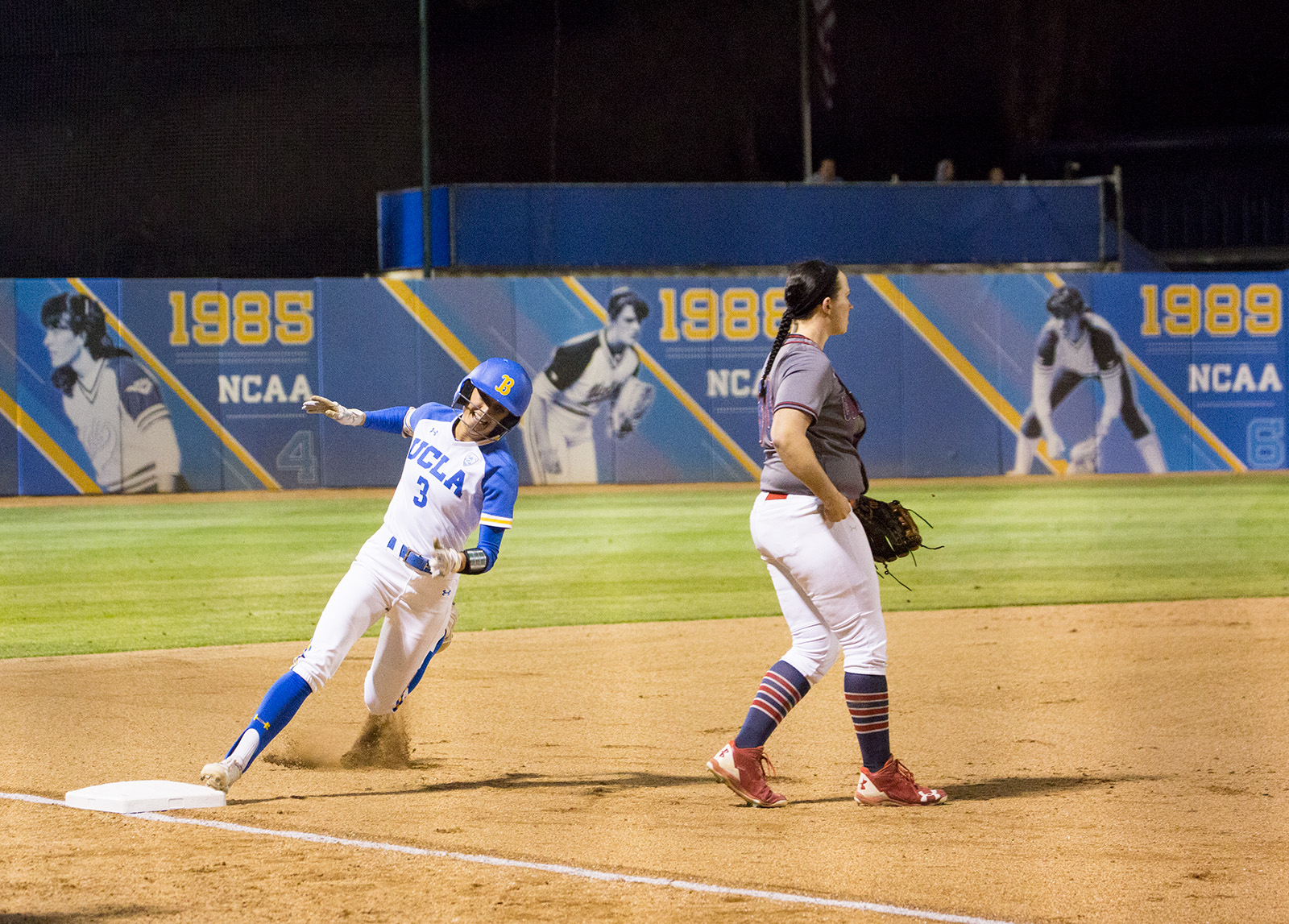