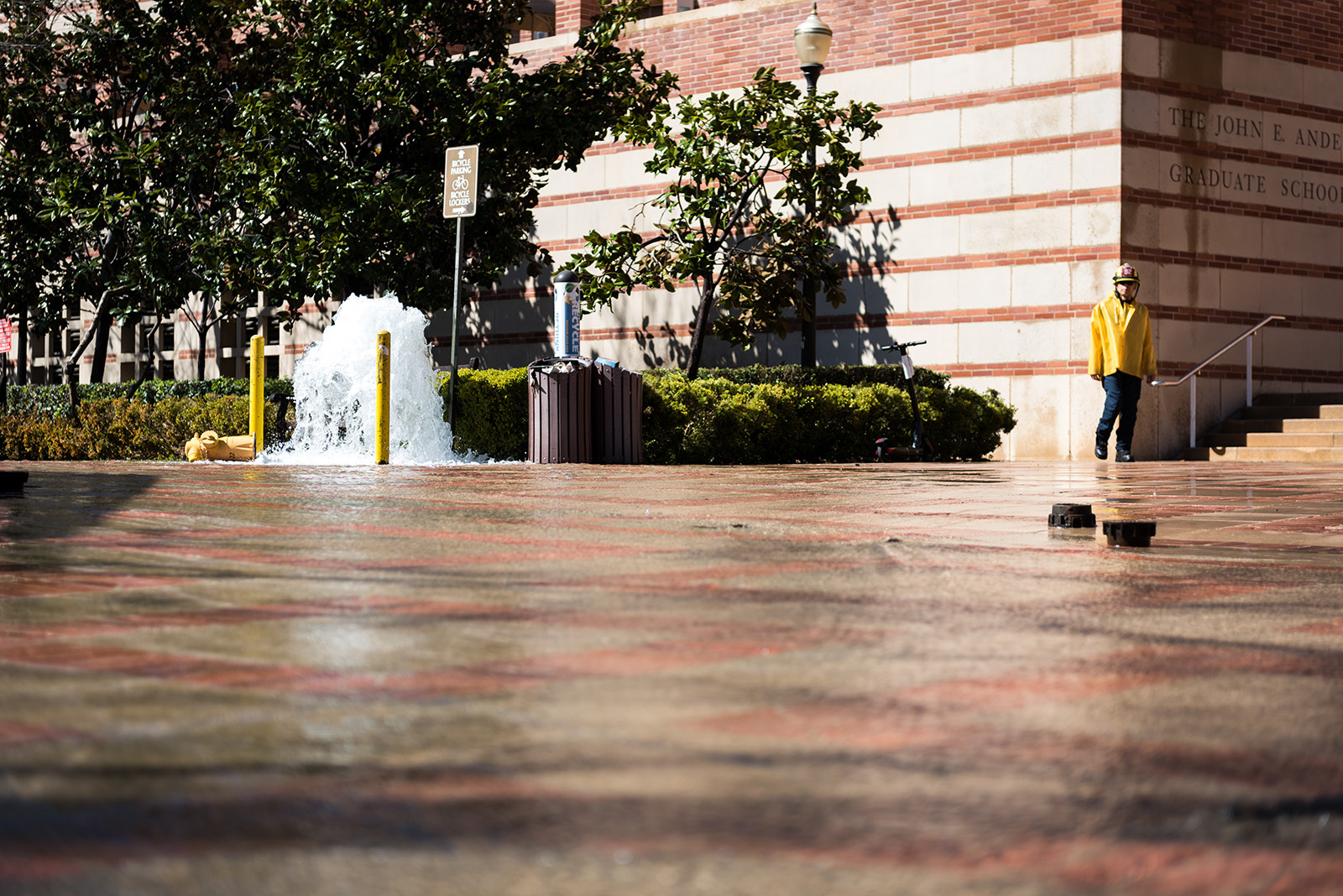 California might be blessed with a windfall of rain, but the cycle of mega-droughts and increased precipitation makes it clear that Los Angeles needs to think ahead when it comes to water. (Liz Ketcham/Assistant Photo editor)

In the past, the City of Angels has been known as the land of palm trees and clear skies, hardly a place where it rains for what feels like every day for a month. So when this rainfall season came around, people took note. The city received a total of 23.64 inches of rain in March – almost half a foot higher than the season normal of 18.31 inches.

But only about 8% of the 18 trillion gallons of water California received in February was absorbed into groundwater basins, when it could have been used by the city. Instead, 80% of the rain ran off sidewalks, flowed down streets and traveled down the concrete river into the ocean, where it became practically useless saltwater.

However, when over 4 million Angelenos turn on the tap, that water needs to come from somewhere. This creates a very simple problem: Los Angeles needs water, but it doesn’t have it.

And the city will continue to not have water until it pumps out expansive water capture legislation. Los Angeles needs wide-reaching projects that allow more rainwater to seep into the ground instead of running into the Pacific Ocean. California might temporarily be out of a drought, but without proactive steps from the city, there will be a lot of Angelenos with dry throats.

Instead of taking steps to capture water, Los Angeles has settled for a massive Band-Aid: importing it.

This leaves less water for people in Northern California and disrupts many natural cycles that rely on the water flows. For example, diverting water from a stream with fish will make the stream more susceptible to temperature change, and could heat the water to an uninhabitable level.

“There are ecological impacts on the places from which we take the water,” said Felicia Federico, executive director of the California Center for Sustainable Communities at UCLA. “Maintaining adequate flows to sustain the fish populations and other biota becomes difficult.”

Importing water also makes Los Angeles overly dependent on rain and snow in Northern California. If there is a shortage in rainfall up north, Southern California will be out to dry.

Mark Gold, associate vice chancellor for Environment and Sustainability, said the main issue lies in Los Angeles’ love of impermeable surfaces such as concrete and asphalt. These are materials that water cannot seep through to enter the groundwater system.

“There has been a big transformation from a permeable Los Angeles to an impermeable paving-over of the Los Angeles Basin,” Gold said. “Flows in the Los Angeles River are way larger – we import water to irrigate because when it rains, so little is absorbed.”

The city has tried to address this with Measure W, passed in November. The initiative provides incentives for property owners to open up more areas, such as patios and driveways, for water infiltration and allocates money to landscape the city to prevent stormwater runoff.

The problem is, the city hasn’t done anything else.

It still needs to kick-start large projects, like unpaving the Los Angeles River to allow its flows to infiltrate and identifying residential areas saturated with pavement and lacking in water collection systems.

The city also has relaxed water usage regulations. While the state prohibits washing down sidewalks, neighborhoods like Westwood have people drive up regularly in the middle of the night and spray down the pavement. Drying up rebate funds from the Metropolitan Water District makes it clear why Californians are back to using as much water as they did before the drought.

This should involve continuing and expanding the lifestyle of conservation that many adopted during the most recent drought, as well as increasing the amount of rainwater that trickles into the Los Angeles Basin through the aforementioned programs.

Of course, passing regulations and authorizing new projects takes time – particularly in red-taped Los Angeles. But Angelenos aren’t forfeiting their long showers or green lawns, especially given the recent increased rainfall. Bureaucracy shouldn’t stand in the way of common sense and proactive measures to keep the water flowing in the pipes and not in the streets. Measure W is just a start, but its effectiveness depends on city officials’ willingness to act while we still have water to spare.

It is important to prepare for California’s climate becoming drier. The recent iteration of megadrought and heavy rainfall might merely be an indicator of a cycle to come.

If that’s the case, Los Angeles needs to get every drop of rainwater in the dirt and not go with the flow.