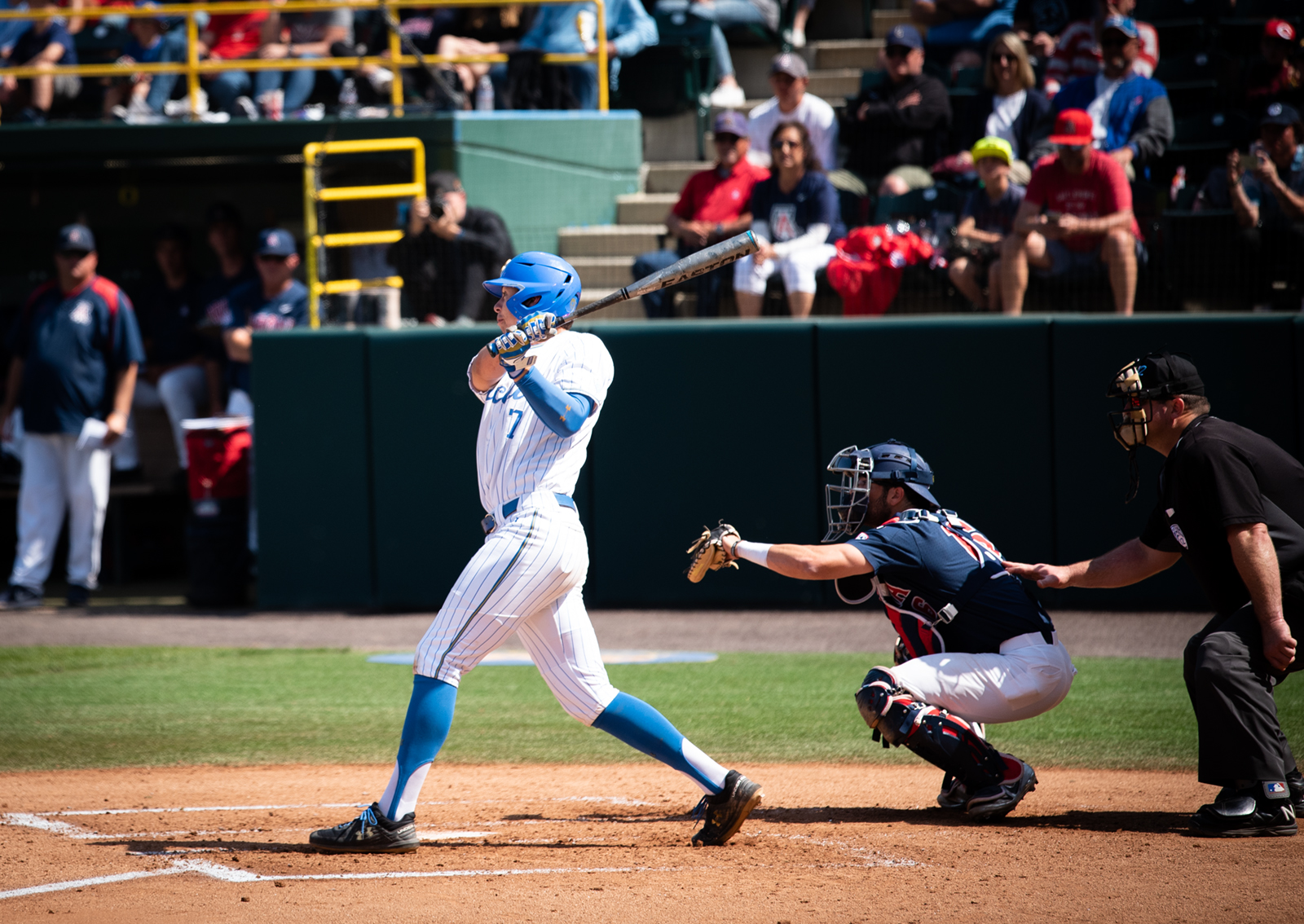 Junior first baseman Michael Toglia has hit four home runs and has picked up 29 RBIs in 30 games this season. After hitting .336 a year ago, Toglia is batting .261 so far in 2019. (Joe Akira/Daily Bruin staff)

The bats are heating up for the Bruins.

No. 1 UCLA baseball (24-6, 9-3 Pac-12) scored just two runs in Friday’s loss to then-No. 2 Stanford (21-5, 7-2) but has scored 30 runs on 36 hits to win its past three games. The Bruins’ offensive production has come in the middle of seven straight games against ranked opponents that will conclude with a three-game series against No. 8 East Carolina (25-7, 8-1 American Athletic Conference) this weekend.

Most of UCLA’s runs have not come through raw power, however – the Bruins’ sole homer during the three games was a two-run shot from junior first baseman Michael Toglia on Saturday against the Cardinal. UCLA is sixth in the Pac-12 in home runs with 19.

The Bruins have instead relied on timely hitting from top to bottom, with 10 different players contributing to the team’s 29 RBIs.

In Friday’s loss, UCLA put 13 men on base, but could only bring two of them home. Since then, the Bruins are batting .444 with runners in scoring position.

Sophomore right fielder and leadoff hitter Garrett Mitchell has helped set the table for these scoring opportunities, reaching base 10 times and batting .615 over the three-game stretch. Mitchell’s 41 hits this season lead the team and are just three shy of his total from last year.

Junior left fielder Jack Stronach had the first four-hit game of his career and UCLA’s first of the season in Saturday’s win. Stronach is batting .420 on the year and has reached base safely in 19 of the 20 games he has started.

While not every Bruin has been on a hot streak, some have still contributed with runs on the line. Freshman center fielder Matt McLain is one for his last 14, but that one hit was a bases-loaded triple Sunday that put UCLA up 9-4.

“(McLain) is going to be a big part of our program the next three years, so we have a lot of faith and trust in him,” said coach John Savage. “Obviously, he’s been struggling. But he’s going to be a really good player at UCLA and he’s had some big hits this season.”

With the extra run support, the Bruins have been able to win despite the pitching staff allowing five runs per game over the three-game stretch. UCLA’s arms own a 2.57 ERA on the season, good for second in the Pac-12.

Freshman right-hander Jesse Bergin, who pitched Tuesday night against UC Irvine and notched his fourth win of the season, said he enjoys having extra runs to work with.

“It’s not fun waiting in the dugout that long, but it’s definitely worth it,” Bergin said. “Getting those insurance runs allows me to stay more calm and feel less pressure.”

The Bruin pitchers will go head-to-head with a Pirates lineup that has scored 27 runs over their own three-game win streak. If UCLA wins the first game of the series Friday, the team will be off to its best start through 31 games since 2010.

“Obviously, rankings don’t mean much when you get into the game because anyone can beat anyone,” Mitchell said. “It does help being able to play top-ranked teams so early in the season so when we get towards the end, we can just play Bruin baseball.”