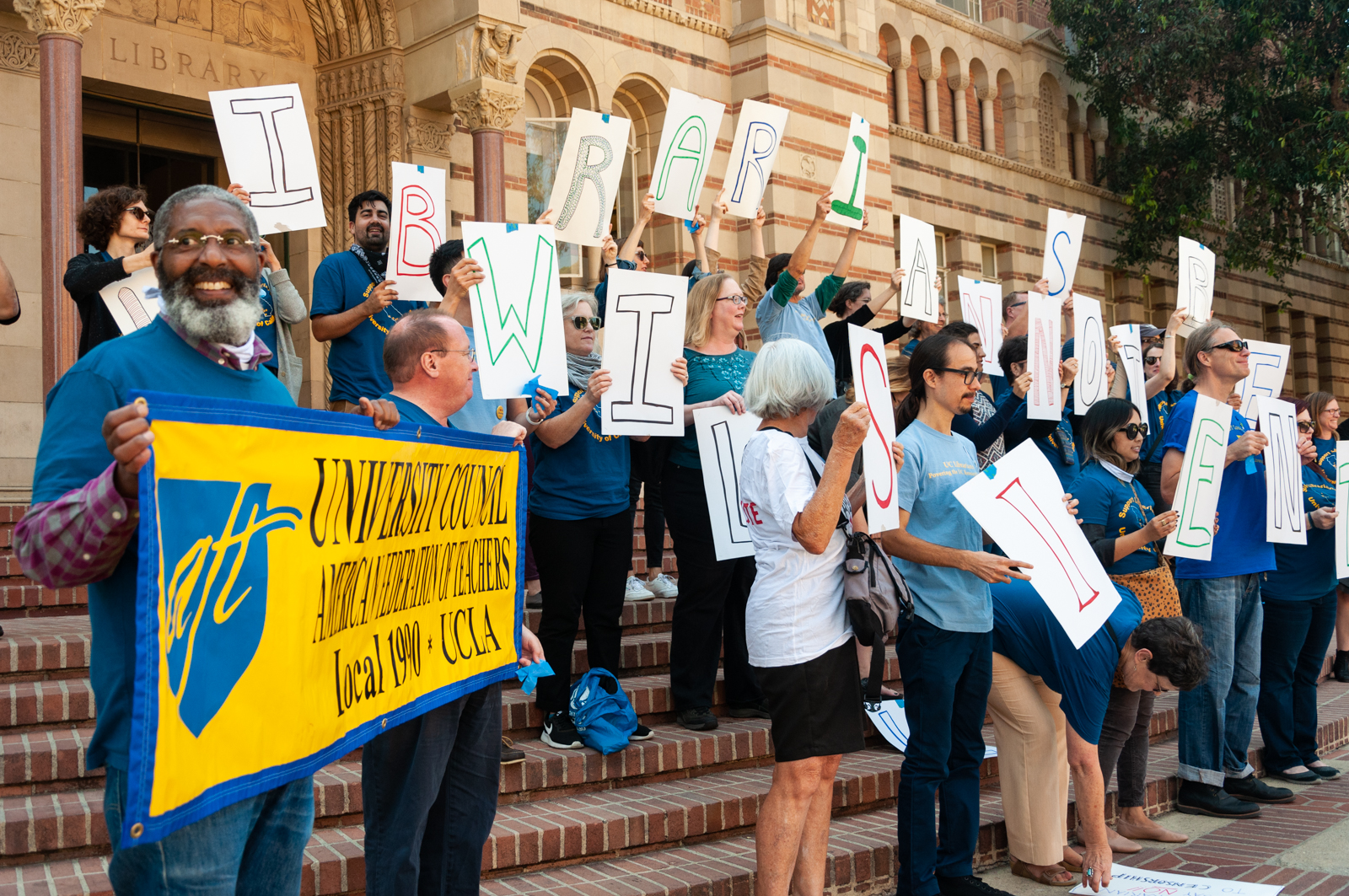 University Council-American Federation of Teachers Unit 17, a union representing more than 350 librarians at the University of California, reached a tentative agreement with UCOP March 25. The five-year contract went into effect April 1 after members voted to ratify it. (Niveda Tennety/Daily Bruin)

University of California librarians ended yearlong negotiations with the UC Office of the President late March after gaining salary increases and academic freedom.

University Council-American Federation of Teachers Unit 17, a union representing more than 350 librarians at the UC, reached a tentative agreement with UCOP on March 25. The five-year contract went into effect April 1 after members voted to ratify it.

UC librarians negotiated a total salary increase of 22-26% over the length of the contract, depending on the librarian’s position, said Martin Brennan, a UCLA librarian and member of the UC-AFT librarian negotiating team.

“We are really pleased with the gains we got,” Brennan said. “It is going to make a real difference in librarians’ lives right away.”

Brennan said the union negotiated these wage increases because librarian salaries at the UC lag behind market rates.

Starting salaries for librarians at the UC trail those at California State Universities by 37% for senior assistants, 32% for associates and 25.5% for librarians, according to the UC-AFT librarian website.

Brennan said the wage increase does not close this gap completely, but significantly reduces it.

UCOP spokesperson Sarah McBride said in an email statement the University believes the agreement is fair and recognizes the contributions of its librarians.

Librarians requested academic freedom protections in their contract, such that they have the freedom to express controversial viewpoints without censorship. Academic freedom is currently enjoyed by UC faculty and students and is subject to academic standards.

Brennan said the University refused to give librarians explicit academic freedom protections in their contract and instead proposed a committee to make policy recommendations on the academic freedom of nonfaculty academic personnel.

The committee was formed in December, and the union agreed to accept the UC’s process for drafting new policy.

The proposed UCwide policy drafted by the committee was made public April 1 and extends academic freedom to all academic appointees for work that contributes to the academic mission of the UC, including but not limited to teaching, research, scholarship and the public dissemination of knowledge.

The policy was made in consultation with nonfaculty academic appointees and other stakeholders, according to a university letter.

The proposed policy is under a mandatory 90-day review by the systemwide Academic Senate, McBride said. Members of the UC community can provide feedback on the policy by July 1, she added.

Brennan added he thinks the proposed policy provides strong academic freedom rights for librarians and 60 other academic titles in the UC.

“It’s really a great victory for us. I mean, I honestly got misty-eyed when it all came true,” Brennan said. “I feel really great to have been part of this, that we’ve made a major change for academics for the University of California, not just made changes for librarians but impacted real change for all academics.”

The union fought for rights that faculty members enjoy, including academic freedom, sabbatical and eligibility for housing assistance programs, Brennan said. The union gained academic freedom protections afforded by the upcoming policy but conceded on the other benefits, he said.

Henry Reichman, chair of the Committee on Academic Freedom and Tenure for the American Association of University Professors, said he thinks the proposed policy is a huge step forward but thinks the University has taken too long in providing librarians academic freedom.

“I think it’s actually shocking that it’s taken this long for the University of California to acknowledge the fact that librarians, in particular, have academic freedom,” Reichman said.

Reichman added he would have preferred the UC to provide librarians with faculty status, as California State Universities and the state’s community colleges have done.

The AAUP and the Association of College and Research Libraries have also recommended that university librarians be classified as faculty members when their jobs involve teaching, research and service. UC librarians said they perform all of these tasks.

Brennan said librarians did not push for faculty status because they were not sure they could win that benefit.

“We tried to fight that battle in the past and we lost. We didn’t know if we could win it this time around, so we went piecemeal,” Brennan said. “We went at the issues one by one.”

Brennan added the new contract does not fully recognize the work that librarians do.

“We had some important gains but not enough to fully recognize the impact that librarians have and compensate us the way that faculty are compensated,” Brennan said.