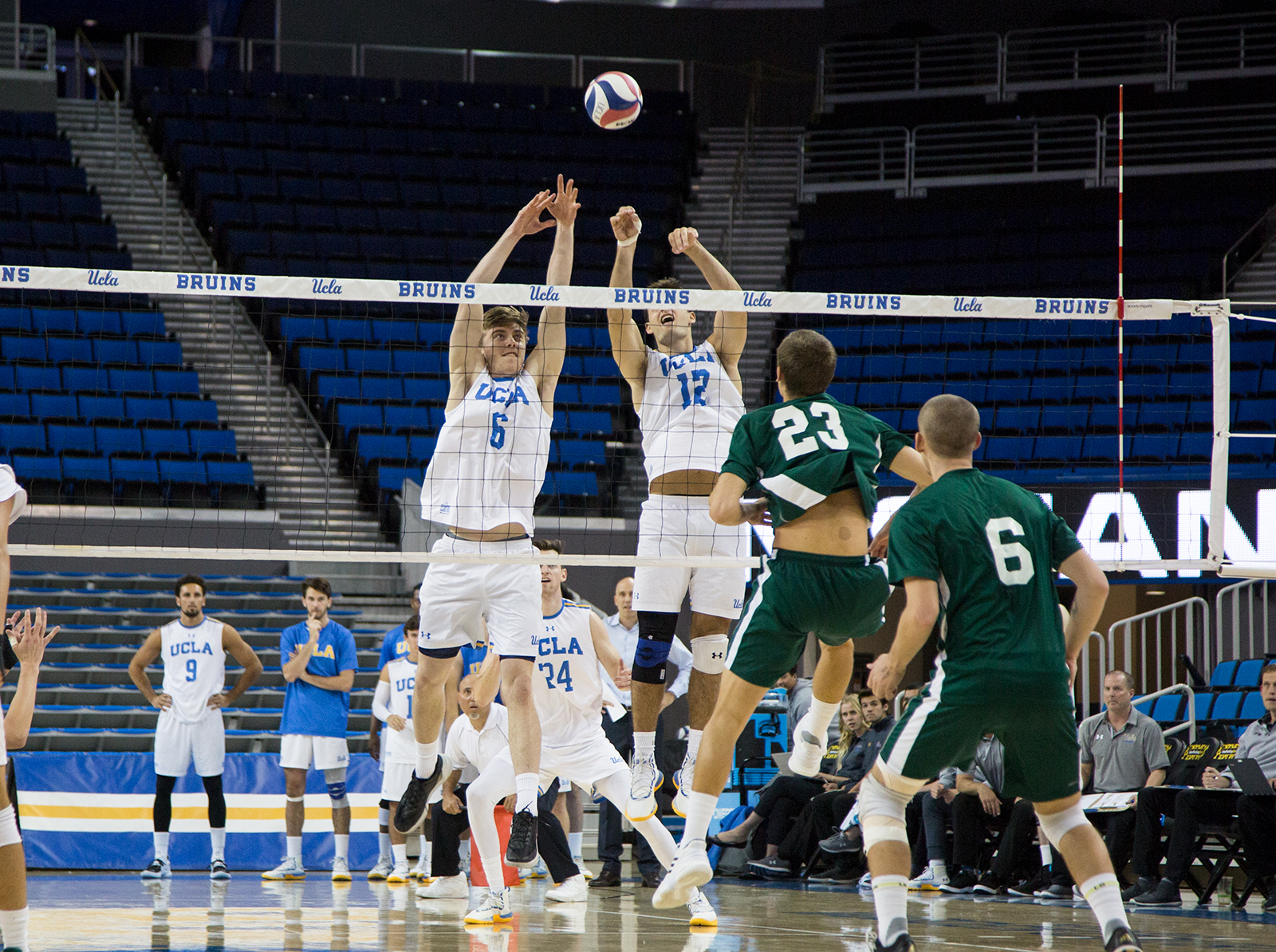 Senior setter Micah Ma’a posted eight kills and hit for .238 against Concordia University Irvine. Earlier in the season, Ma’a recorded 36 assists and only had one kill against the Eagles. (Xuxin Xhang/Daily Bruin)

All of the Bruin seniors contributed to a conference win on Senior Night.

The Bruins were down in the first set 8-10 before they won the next seven points to take the lead at 15-10. Two points were service aces from sophomore middle blocker Grant Maleski, as UCLA totaled six aces in the match.

The Bruins kept the lead until the score was 23-18. Senior defensive specialist Spencer Sachs then subbed in and served as UCLA won the point to take the lead 24-18 before the Bruins won the set by a score of 25-19. Sachs had only played in one set this year against Lewis before subbing in tonight. Sachs said he was grateful for the opportunity to play on Senior Night.

“Being able to get in here at Pauley Pavilion in front of my friends and family is definitely a highlight,” Sachs said. “It’s bittersweet. UCLA and the men’s volleyball team has been an unbelievable experience for me. I appreciate everything.”

UCLA hit for .400 in the second set as it accumulated 16 kills and two hitting errors. The Bruins also posted five team blocks in the set and held Concordia to a .184 hitting percentage. With UCLA leading 24-19, graduating redshirt junior middle blocker Jonah Kay subbed in and picked up the final kill to win the set 25-19. Kay also only played in one match against UC San Diego earlier this season. He said he was prepared for his opportunity to enter the game.

“(My team) told me to commit on the other middle blocker so I could have a chance one-on-one,” Kay said. “I had an inkling (that I would play today). I was staying warm and prepared and was able to answer the call.”

Coach John Speraw said he was fortunate that Sachs and Kay could both get in the game.

“In any sport with a clock, it’s virtually impossible sometimes to come back based on the time,” Speraw said. “We don’t have that (in volleyball). So I’m really grateful we had the opportunity to get (Sachs and Kay) in.”

The Bruins finished the match by winning the third set again by a score of 25-19, as they held the lead throughout the set.

Senior setter Micah Ma’a and senior outside hitter Dylan Missry ended the match with the second and third most kills on the team. The duo had eight and seven kills, respectively, as Ma’a hit for .238 and Missry hit for .333.

The Bruins will travel across town to face rival No. 6 USC (15-9, 6-5) on Saturday. UCLA will need a win to have a shot at claiming the top seed in the MPSF conference.