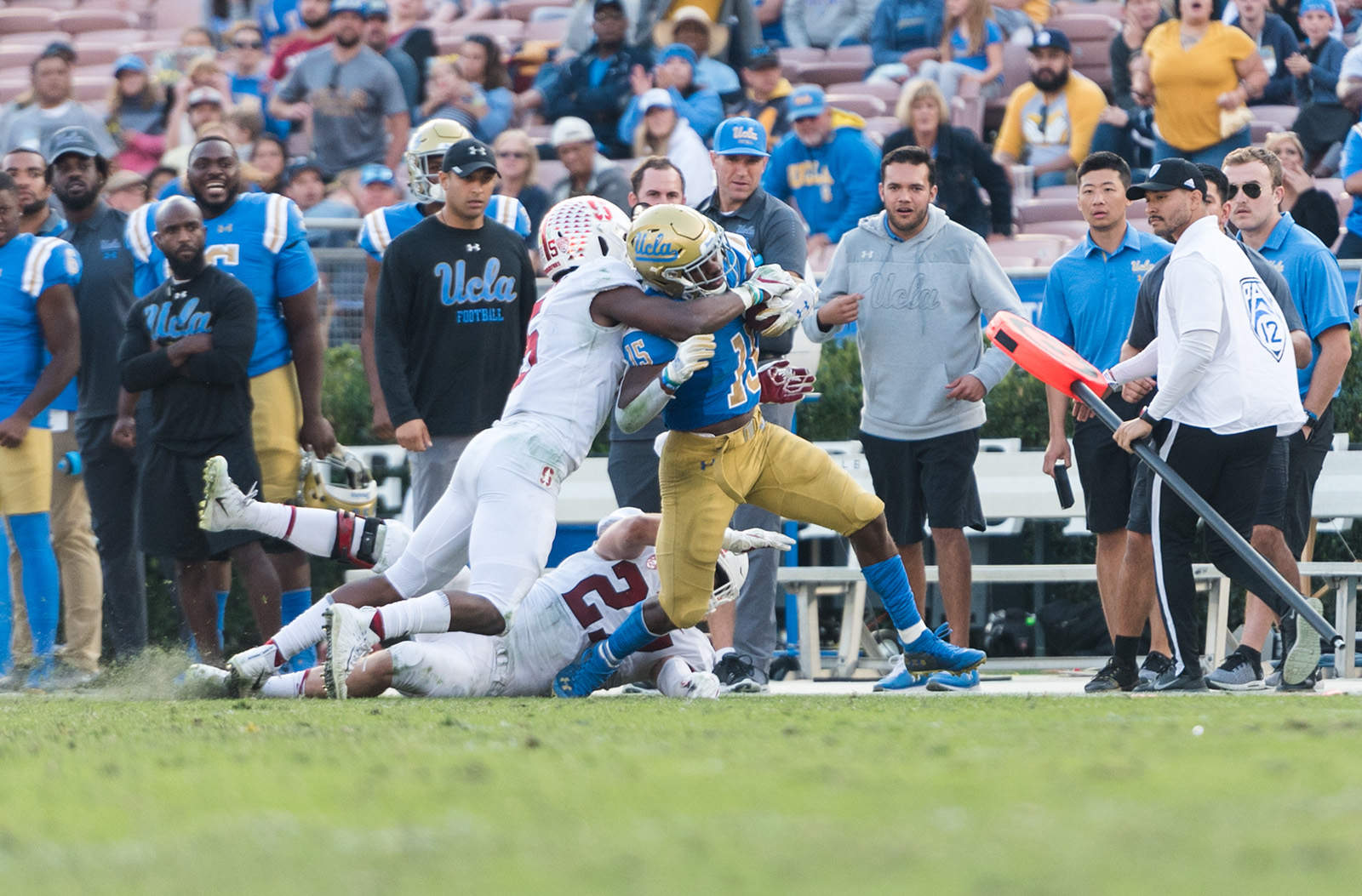 Rising sophomore Martell Irby appeared in all 12 games for UCLA football as a freshman last season while splitting time between running back and special teams. Irby carried the ball 45 times for 191 yards and a touchdown. (Axel Lopez/Assistant Photo editor)

Thunder and lightning. Cars and traffic. Peanut butter and jelly.

Many everyday objects come in pairs, intended or unintended.

In a sense, so do people – like Martell Irby and Kazmeir Allen.

The rising sophomore running backs joined UCLA in August and both had cameo appearances in the Bruins’ backfield. But neither claimed the true backup role until injuries to then-seniors Bolu Olorunfunmi and Soso Jamabo midway through the season forced Irby into action.

Following Olorunfunmi’s and Jamabo’s graduations and junior Brandon Stephens’ transfer, Irby and Allen are now the de facto backups behind rising redshirt senior Joshua Kelley. And according to Irby, they can reflect on their shared experiences during their freshman seasons.

“Me and (Allen), we went through the same struggles together,” Irby said. “Like, ‘Are you getting this?’ ‘No.’ ‘OK, I’m comfortable, let’s work through it together instead of feeling alone and you have to work through it by yourself.’ I’ve always had (Allen) since I’ve been here, so yeah, it’s a comforting feeling.”

Neither player saw the field much, and they said they had to adjust to a new playbook and unfamiliar game speed and tempo. The two combined for only 75 carries and 15 catches for 470 total yards and three total touchdowns.

After Allen sprinted through Cincinnati’s defense for a 74-yard touchdown in last season’s opener, he battled recurring injuries and only rushed for 85 yards in seven games the rest of the year.

Irby also played sporadically, and he didn’t rush for more than 47 yards in any game last season.

“They were both kind of thrown into the mix, we had some injuries at the position so those guys kind of ascended up the ladder there,” coach Chip Kelly said. “They’re starting to get more comfortable in terms of what we’re doing.”

Experience aside, it also helps having someone like Kelley as a role model.

“That guy is incredible,” Allen said. “He just does everything right, so I mean, (I) just have to look at him and try to do the same.”

Unlike Irby and Allen, Kelley played two years at UC Davis before transferring to UCLA and walking onto the football team.

After Kelley changed his practice habits following a benching against Fresno State, he snatched the starter role early in Pac-12 play and finished with the 10th-most single season rushing yardage in school history.

That humility, Irby said, is one of his biggest takeaways from Kelley.

“Our coaches are always telling us, ‘You guys have a great example who’s ahead of you, he’s only got one more year left, pick his mind, just talk to him, sit and talk to him and reflect on how he goes about life,’” Irby said. “Because who you are as a person off the field, that’s going to translate to who you are on the field and (Kelley) is a great example of that.”

That work ethic extended to the offseason, but in a different way.

While Allen tried to regain the weight he lost during the season, Irby focused on becoming leaner.

And even though the two have different goals in mind, at least they’re going through the process with the other by their side.

“(Allen) really has become my brother since I’ve been here,” Irby said. “We just have to keep working, keep pushing ourselves. I expect him to hold me to a high standard. I’m trying to do the same thing for him, so that’s where our relationship kind of is.”