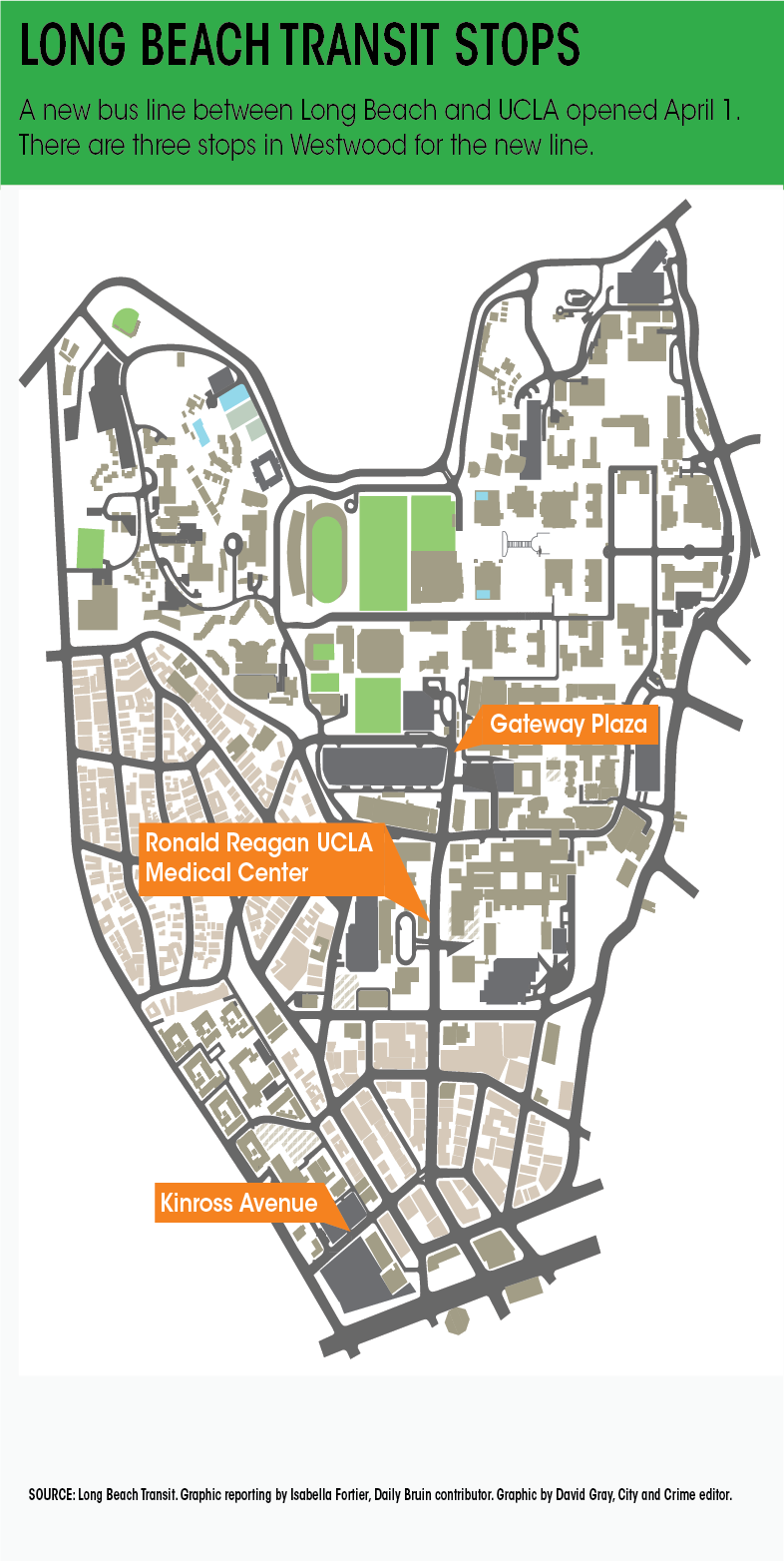 Students and staff will now be able to take a new direct bus line between Long Beach and UCLA.

The UCLA/Westwood Commuter Express will offer a direct connection from Long Beach to Westwood starting Monday. The new line has two stops in Long Beach and three stops in Westwood. The year-long pilot program was created through a partnership between UCLA Transportation and Long Beach Transit.

Michael Gold, the public information officer for LBT, said the idea for the partnership started two years ago when LBT launched its Systemwide Transit Analysis and Reassessment Initiative. Over 18 months, LBT held community meetings at which the public could comment on what services they needed.

“At one of the meetings, I had three people come up to me. They asked if we were contemplating a shuttle up to the west side,” Gold said. “We took this input and said, ‘Yeah, that is something that we’d consider long-term.'”

Gold said UCLA Transportation then reached out to LBT about a partnership.

“In summer (or) fall of last year, someone from UCLA contacted us and said that they had heard about this process and asked us if we were interested in exploring the idea of a commuter shuttle,” Gold said.

Interested riders can buy passes online or at the UCLA Central Ticketing Office. While UCLA offers discounted monthly passes for students and staff, anyone can utilize the direct line. UCLA employee passes cost $96 and student passes cost $80. Single fares cost $4 one way and $7 round trip, and can be purchased on the bus using cash or through LBT’s transit app.

According to UCLA’s 2017 State of the Commute report, over 60,000 employees and students commute to UCLA on a regular basis.

Several students expressed interest in the new service but emphasized commuters still face issues with scheduling their days and participating in on-campus activities.

“One time I did take the Blue Line into downtown, then the Expo Line, and that commute probably took about two and half hours,” Rivera said. “It was possible, but it wasn’t feasible.”

While Rivera said he was excited about improved mass transit options, he thinks the limited bus schedule will restrict commuting transfer students’ ability to participate in social and extracurricular activities on campus.

“If they had later options that would give transfer students the opportunity to have a real college experience, I would be more inclined to use it,” Rivera said. “It was a real struggle to have any opportunity to take advantage of any of the extracurricular stuff.”

Rivera now pays for a student commuter parking pass, which costs $249 per quarter.

Rushna Raza, a fourth-year molecular, cell and developmental biology student, commutes for three hours from the San Fernando Valley to UCLA by bus. She said she experienced the pros and cons of commuting when she moved off campus.

“This year a lot of my time is bus dependent. I have to plan my day around that,” Raza said. “Overall I’ve made it work.”

Raza, who is a student staffer at the UCLA Transfer Student Center, said that while commuter students face more social restrictions, the commuter community is working to establish itself on campus.

“Most of our population of transfers are commuters,” Raza said. “We’re trying to make a more commuter-receptive culture by having a commuter breakfast early in the morning.”

Gold said LBT does not know how many people will use this service since it is still in its pilot phase, but they are prepared to roll out as many buses as needed.

“We’re just excited to see how it all comes together and hope it’s a great service for people who live here and work or go to school up in Westwood,” Gold said.

Rivera said he believes that UCLA needs to do more to address commuter concerns, but added he is excited about the new line.