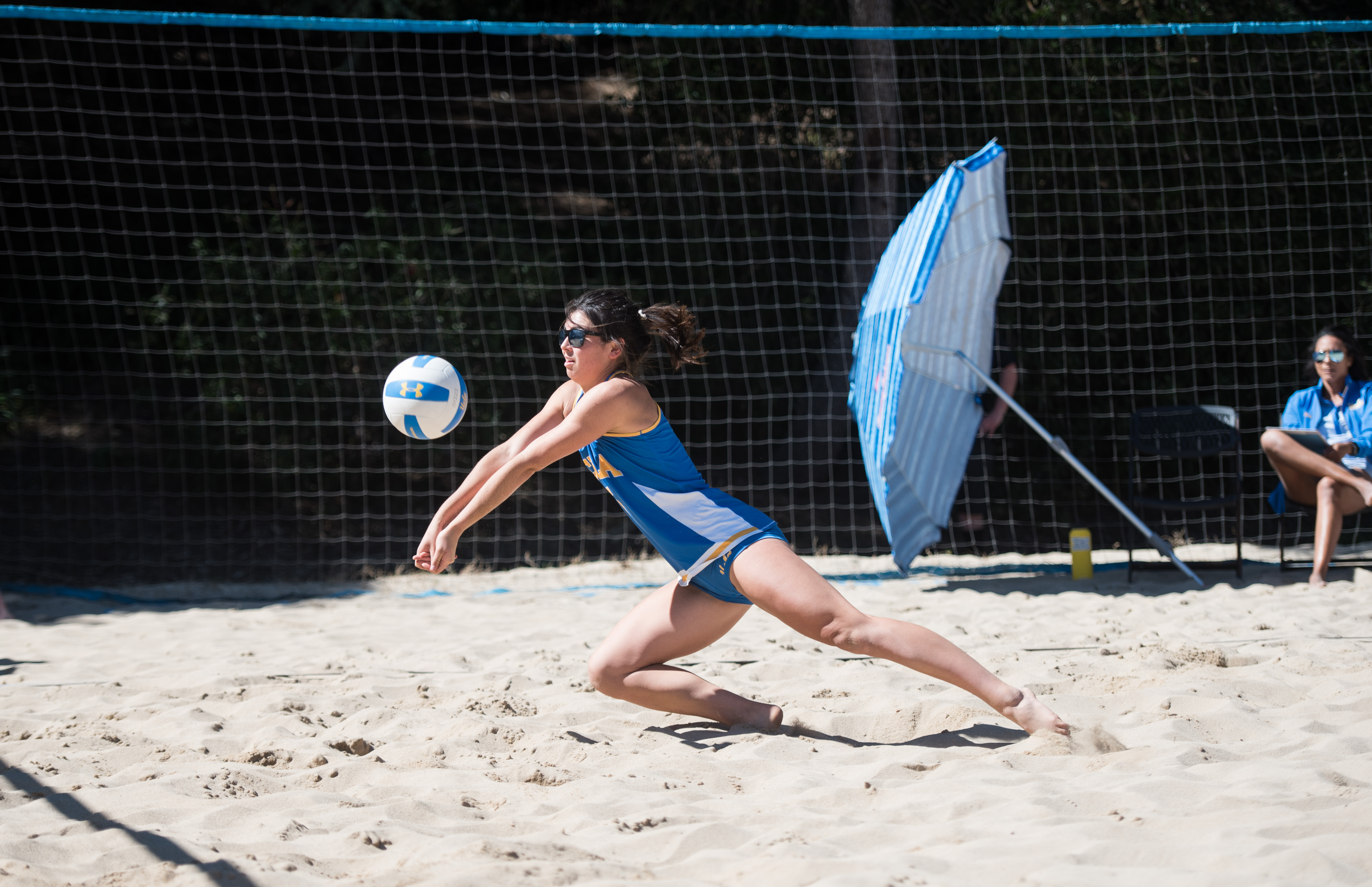 Senior Zana Muno and her partner freshman Abby Van Winkle are an undefeated 19-0 on the season. The duo is the only Bruin pair which hasn’t dropped a match yet. (Alice Naland/Daily Bruin)

With just over a month left, the Bruins still have yet to taste defeat.

“Our big focus right now is we want to continue to improve,” said coach Stein Metzger. “We flew out here to get very hard matches. It’s all about preparation, it’s all about learning. We’re trying to continue to try and stay ahead of the pack and maybe create more separation.”

Seniors Megan and Nicole McNamara clinched the Bruins’ wins against the Hatters and the Panthers. The twins won each of their eight sets over the weekend, but they had to go over the 21-point mark twice to close out the sets against the Tigers and Panthers.

Senior Sarah Sponcil and junior Lily Justine also went a perfect 4-0 in their matches down in Miami Beach. The pair played on court two all weekend and never allowed their opponents more than 18 points in a set.

“We’re coming up against really good opponents,” Sponcil said. “We’re looking forward to whoever we have next. (Playing these teams) really prepared us for (the NCAA championship). We were tested a lot, but I think mentally we came out a little stronger.”

Senior Zana Muno and freshman Abby Van Winkle won all four of their matches in the invitational. The pair dropped three sets, but Muno and Van Winkle maintained their perfect record as a duo playing on court three.

The court four pair of junior Savvy Simo and sophomore Lea Monkhouse and the court five pair of senior Izzy Carey and freshman Lindsey Sparks each went 3-1 over the weekend. Simo and Monkhouse fell in three sets against the Tigers while Carey and Sparks lost in a three-set match against the Seminoles.

Muno said the conditions in Miami Beach closely imitated those in Gulf Shores, Alabama, where the NCAA championships are held in early May.

“I think we got the weather we wanted here,” Muno said. “It was extremely windy and a little bit of rain every once in a while. It’s the exact same environment as Gulf Shores, so I think that preparation is only going to make us stronger.”

UCLA will next play No. 2 USC (16-3) and No. 13 Loyola Marymount (15-7) at Sunset Canyon Recreation Center on Wednesday. The Bruins have topped each opponent this season, winning 3-2 against the Trojans and 5-0 over the Lions.

Metzger said his team made good improvements in Florida, but knows that the Trojans will be looking for revenge against the Bruins.

“What we need to do is get refocused on our game plans and scouting reports,” Metzger said. “Against USC, it’s a team we play more than anybody. We know them well, but we need to make sure we make any adjustments and make sure we’re prepared for them.”