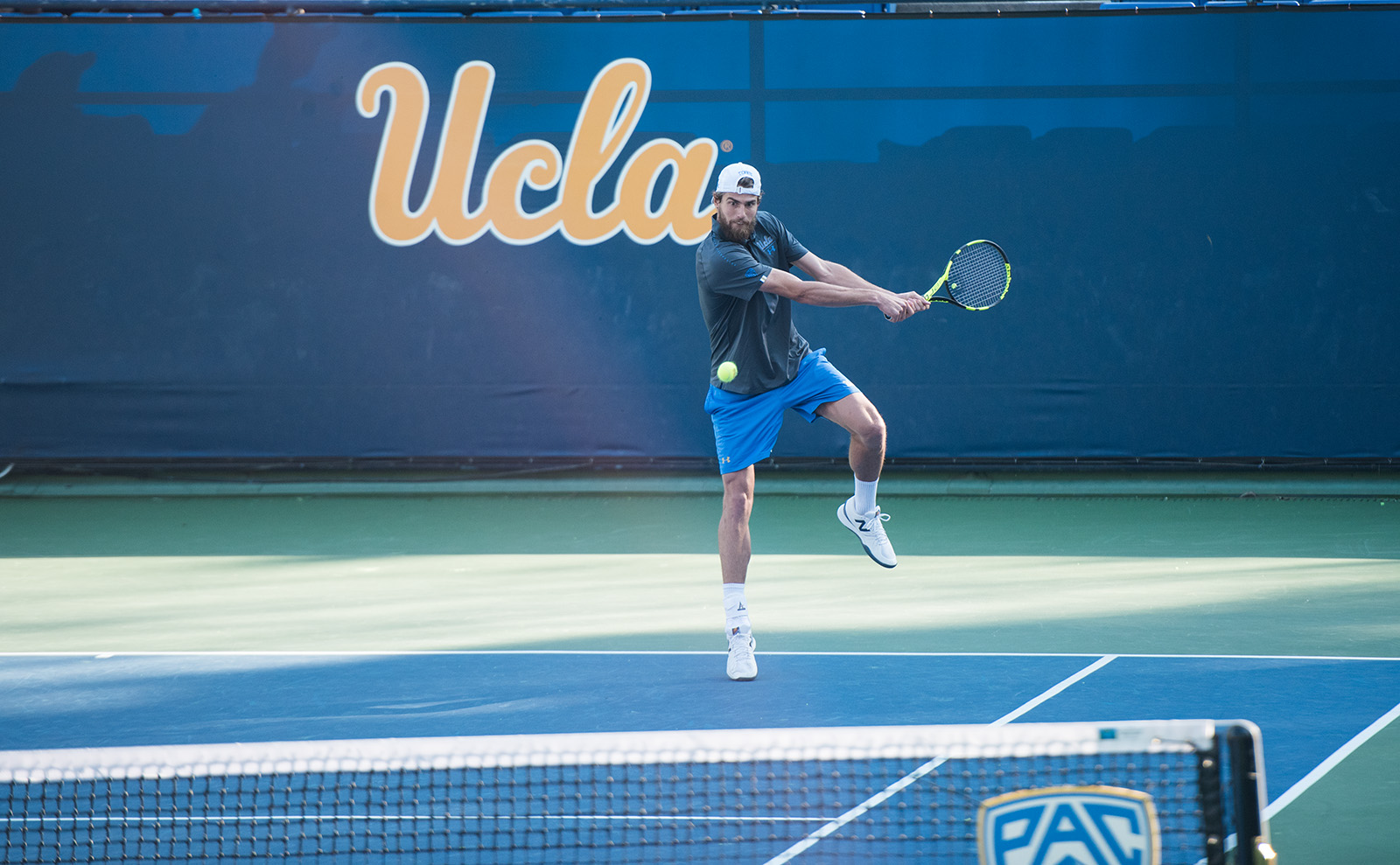 Senior Maxime Cressy claimed his seventh and eighth singles wins of the season this weekend against Stanford and California, respectively. Every singles match Cressy has played this season has been at the No. 1 spot in the lineup. (Alice Naland/Daily Bruin)

The Bruins accomplished a feat they had been unable to do since 2013.

The Stanford match began with a doubles point decided by senior Maxime Cressy and sophomore Keegan Smith. After being down two match points in a tiebreak, Cressy and Smith won four straight points to win the match, 7-6 (6).

“(Smith) and I are really close and play well together on the court,” Cressy said. “Our serves are both massive weapons and a break, or minibreak, are enough for us to convert and win a set.”

The Bruins secured the 4-2 win behind singles victories from junior Ben Goldberg, Smith and Cressy – all in straight sets. Cressy and Smith defeated Stanford singles opponents ranked No. 8 and No. 33, respectively. Smith said after being off the court with an ankle injury for three weeks this season, he was impressed with his performance this weekend.

“I was playing pretty well, serving well,” Smith said. “The break helped a little bit, and it’s really good to be back. It pumps me up just to be playing out there and playing well.”

The doubles point against California proved to be less trouble for Cressy and Smith, as well as for the other duo of sophomore Bryce Pereira and freshman Patrick Zahraj. Both doubles teams claimed 6-4 set victories to clinch the point for UCLA.

Although California does not have four top-70 singles players like Stanford, coach Billy Martin said they still posed a great threat and the rankings system doesn’t always reflect actual performance.

“We went out on Saturday and had to play a tough Cal team at home,” Martin said. “Honestly, our players and Cal’s players may not be ranked as high (as Stanford), all of these good players can compete with anyone on a match day.”

Smith, Cressy and freshman Govind Nanda all picked up singles victories against California to claim the 4-2 win. Cressy said his 3-6, 7-6 (2), 6-1 comeback victory over California’s Yuta Kikuchi was more a credit to his mental strength than to his actual performance.

“I had to come up with a lot of strength mentally when I was down a set and 5-0,” Cressy said. “There was one little part of me (that) believed that nothing was over. I’m not playing my best, but I was able to win this match (Saturday) by hanging in there and playing the important points really well.”

Martin said the two conference victories featured the most impressive play from the Bruins this season.

“It’s just the shot in the arm the team needed,” Martin said. “I’m really just so proud of them because those were the best two matches the team has played all year.”