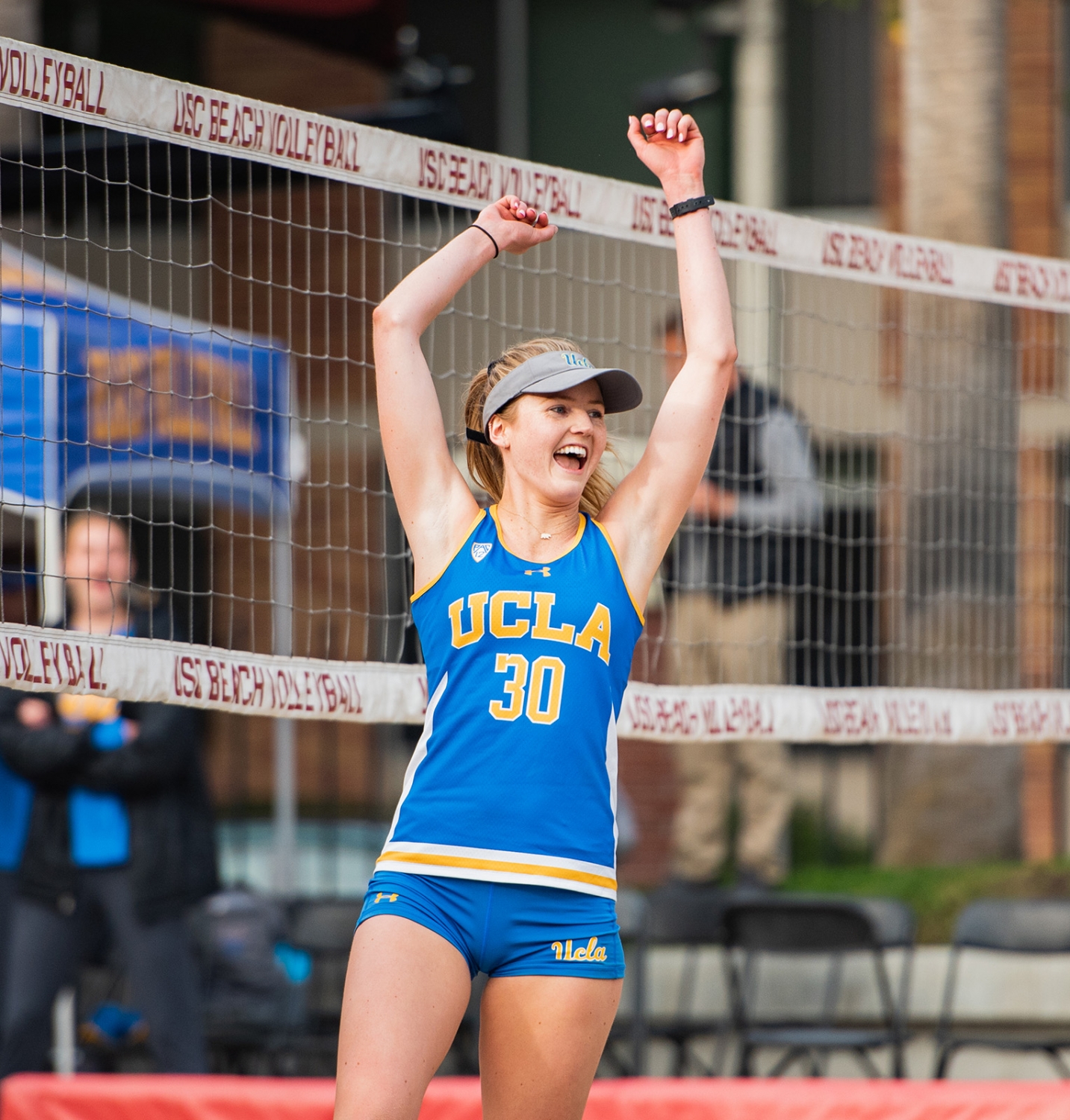 Senior Izzy Carey broke the program all-time record for most wins in career with wins over Oregon and Loyola Marymount on Tuesday afternoon. Carey is 17-0 on the season on court five for UCLA beach volleyball. (Alice Naland/Daily Bruin)

Carey set a new UCLA record for most wins in a career after her win against the Ducks pushed her to 103 victories. She extended her new record to 104 with a three-set win over the Lions.

“(I was) just trying to stay focused and be in the moment,” Carey said. “I did know it was coming, and people kept bringing it up. But it was fun because my teammates are incredibly supportive, so it was fun to experience it with them.”

Coach Stein Metzger said he has never seen a more disciplined or harder worker than Carey in his years as the UCLA coach.

“In terms of leadership, both on and off the court, (Carey) is second to none,” Metzger said. “It has translated into a wonderful career for her, and she’s still going. I can’t think of anyone more deserving than her to hold the current title of most wins at UCLA.”

With players such as junior Lily Justine and sophomore Lea Monkhouse out through illness, new duos were formed just before the team headed to Santa Monica.

Sophomore Mac May played in her first competitive match since Feb. 24 when she paired with junior Savvy Simo on court three against the Ducks. The pair clinched the match with a straight set win of 21-12, 21-14.

Senior Sarah Sponcil and junior Madi Yeomans won all four sets, beating the Ducks 21-17, 21-10 and the Lions 21-14, 21-19, both on court two. Senior Zana Muno and freshman Abby Van Winkle played on court four against the Ducks and court three against the Lions, winning in straight sets in both games.

May said the weeks off allowed her to continue to fine tune her game, and she felt that her and Simo played well together even though their communication was not completely ideal at the start of their match against Oregon.

“It is a little nerve-wracking going back into the lineup,” May said. “I kept trying to get better and kept trying to improve so that if I went back in, I wouldn’t have to feel any rust. I’m happy that I didn’t let up at all.”

The Bruins have already faced the Seminoles, the Tigers and the Panthers during the East Meets West Invitational earlier this year. UCLA won all three of those games 4-1 as they completed an undefeated weekend.

Carey said the team is looking forward to the cross-country trip as the Bruins use this opportunity to get a feel for what conditions might be like at the NCAA championships in May later this season.

“Miami is always a fun trip,” Carey said. “It’s always over spring break, so it’s a really fun time. It gets really hot there, so it’s good preparation for Alabama in May. It’s really good conditioningwise, playing four matches in a weekend in intense heat.”