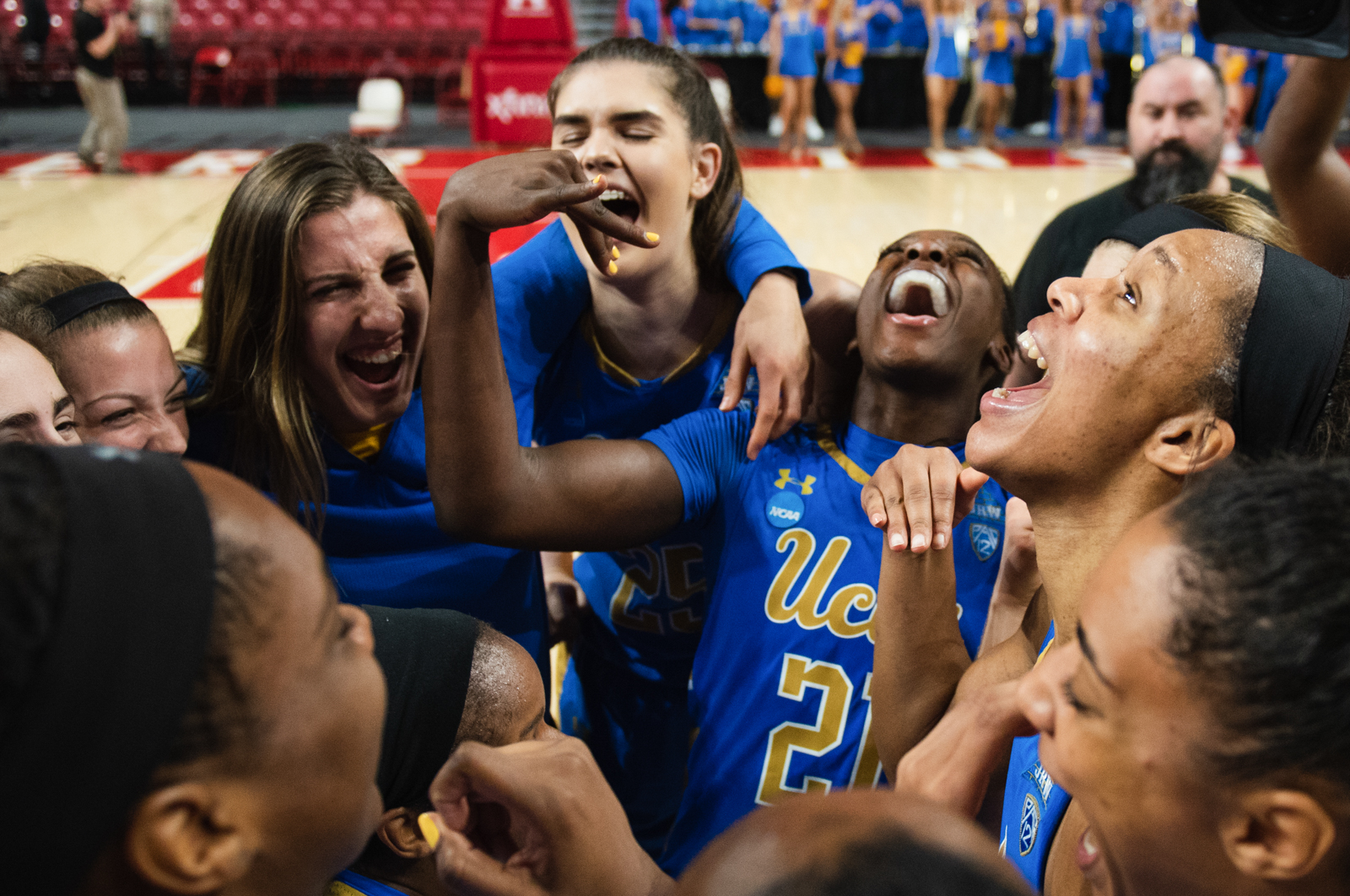 No. 6 seed UCLA women’s basketball celebrates after the final buzzer sounded, pulling off the upset over No. 3 Maryland. The Bruins are headed to the Albany regional and will play UConn in the Sweet 16 on Friday. (Alice Naland/Daily Bruin)

COLLEGE PARK, Md. — The Bruins may just have one national title, but they’re on to their fourth consecutive Sweet 16.

As coach Cori Close got done with courtside media after the game, she glanced over to the crowd to see former Bruins Denise Curry and Debbie Haliday with wide smiles plastered across their faces.

“Both were on that team,” Close said, “To have those two people be the most supportive and the most exuberant … it means a lot.”

UCLA was still part of the Association for Intercollegiate Athletics for Women at the time, before the NCAA extended to women. The Bruins earned the AIAW title with the win over the Terps at Pauley Pavilion in front of 9,351 fans – the largest crowd to ever witness a women’s basketball title game by 1978.

“(Curry and Haliday) have been with us on our entire journey because they believe in our mission,” Close said. “But it honestly really hits my heart in a deep way and I’m really humbled to be a part of the trail that they blazed.”

Senior guard Kennedy Burke drilled a jumper at the top of the key with 1:03 to go in the final quarter, giving UCLA an 81-79 lead – one the Bruins held for the rest of the contest.

Senior guard Japreece Dean iced the game at the free throw line, going a perfect 8-of-8 on the night. Dean – who registered 22 points on the night – has gone 90-of-92 from the charity stripe since Nov. 24 and is on pace to break Anne Dean’s single-season UCLA record of 91.9 percent.

“I know people didn’t think (UCLA) would be here,” Dean said. “So I think that’s probably the best feeling – being somewhere you’re not suppose to be.”

UCLA jumped out to a 26-20 lead heading into the second period, but the Bruins allowed Terps forward Stephanie Jones to go 6-of-6 from the field for 13 first-quarter points.

In the second frame, UCLA strung together a 8-2 run during a 1:24 stretch, when the Bruins also grabbed five offensive rebounds. UCLA – which is the third-best offensive rebounding team in the nation, averaging 16.9 per game – already had 17 by halftime.

“Offensive rebounds have been one of our strengths since the beginning of the season,” said sophomore forward Michaela Onyenwere. “It just gives our guards confidence to shoot the ball because they know that we’re going to get the rebound and get extra possessions.”

Despite shooting just 36 percent from the field in the first half, the Bruins attempted 13 more shots than the Terps and outrebounded them 28-18. UCLA led 44-40 at the break.

But Maryland came out of the locker room with a 7-0 run to take a 47-44 advantage – its first lead since the beginning of the first quarter – before a right-elbow jumper by Burke ended the run.

The Terps outscored the Bruins 31-22 in the third quarter and led by five heading into the final period.

“We started off the third quarter kind of sluggish and I know I had those couple turnovers right at the beginning,” Dean said. “So I knew I had to regroup myself and regroup the team. … And then I had to be on attack mode because when I’m on attack mode, good things happen.”

In less than two minutes into the fourth quarter, a reverse layup by Onyenwere and a mid-range floater by Dean cut the Bruins’ deficit to 71-70 at the 8:37 mark. Onyenwere – who poured in a team-high 30 points and eight rebounds – followed that with back-to-back jumpers to pull UCLA ahead by one.

UCLA finished the game with 27 offensive rebounds despite the Terps shooting 47 percent from the field compared to the Bruins’ 36 percent.

“Sometimes (my players) needed to teach me by the way they chose to come in and grow and give to each other day after day when they weren’t being rewarded,” Close said. “I’m just really thankful. … And I feel like I’ve been able to grow as a coach this year because I’ve been able to be around them.”

The Bruins will face the No. 2-seeded Connecticut Huskies in the Albany regional Friday in the Sweet 16. The Huskies defeated the No. 10-seeded Buffalo Bulls 84-72 on Sunday night – their closest margin of victory in the Second Round since 1999. 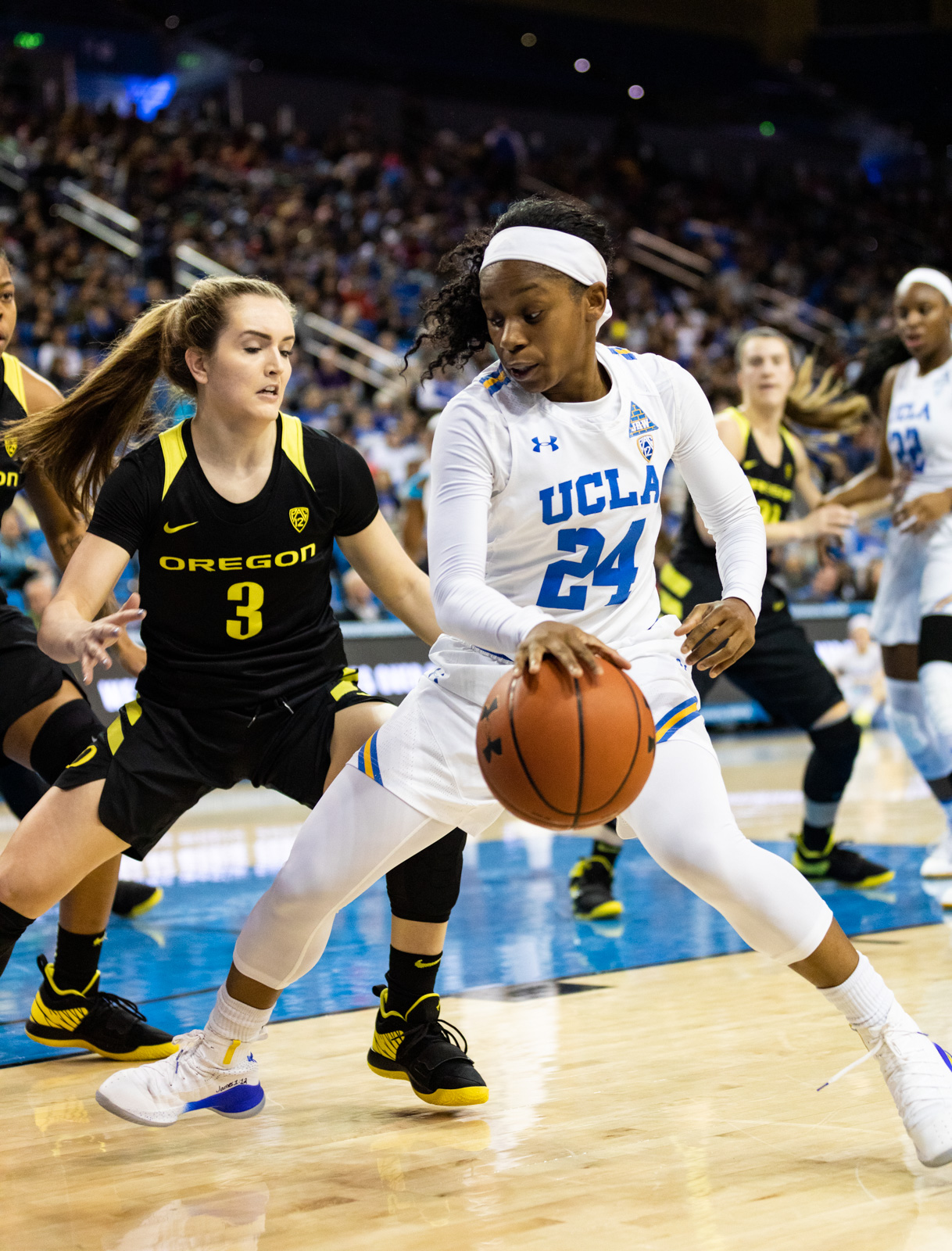 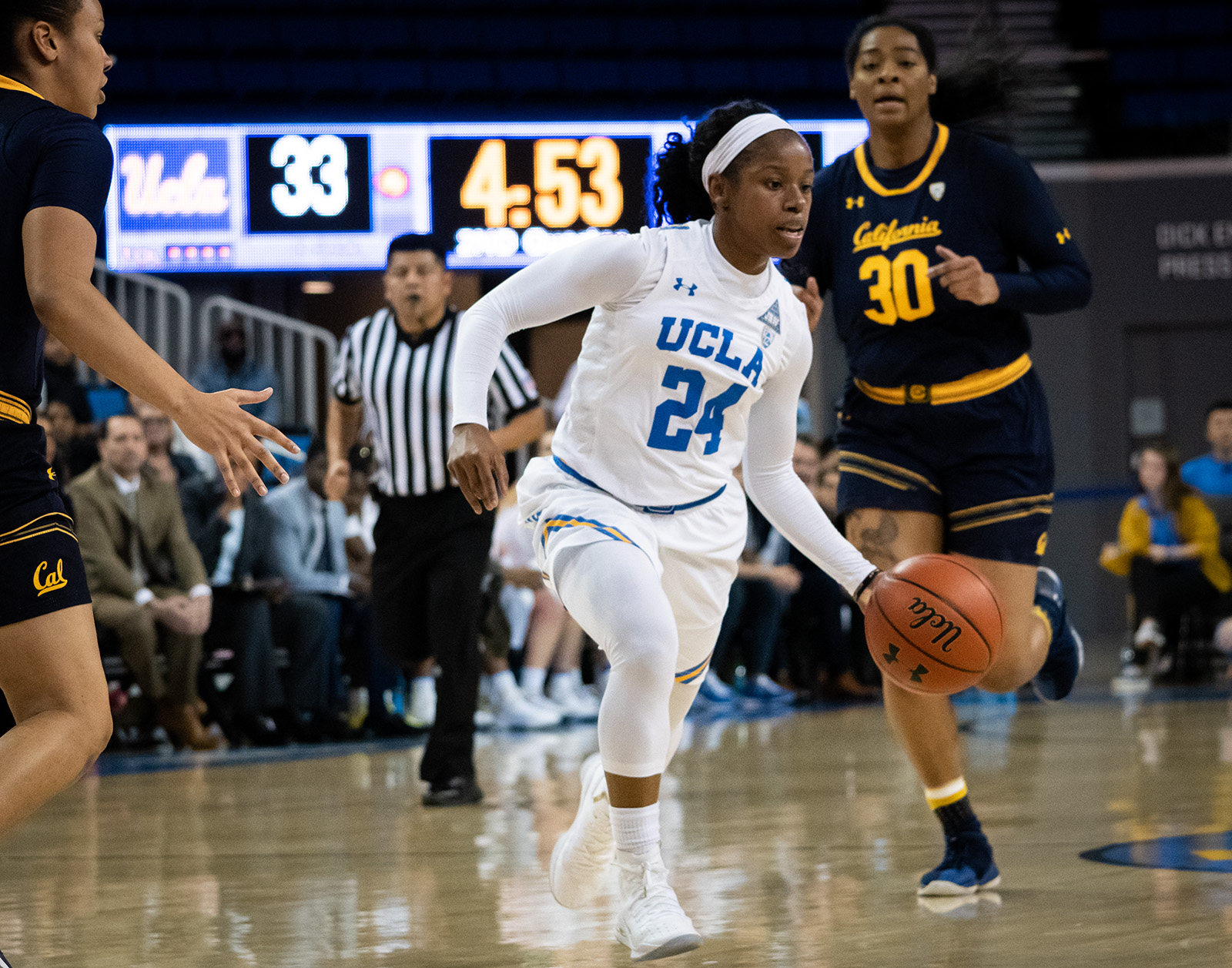