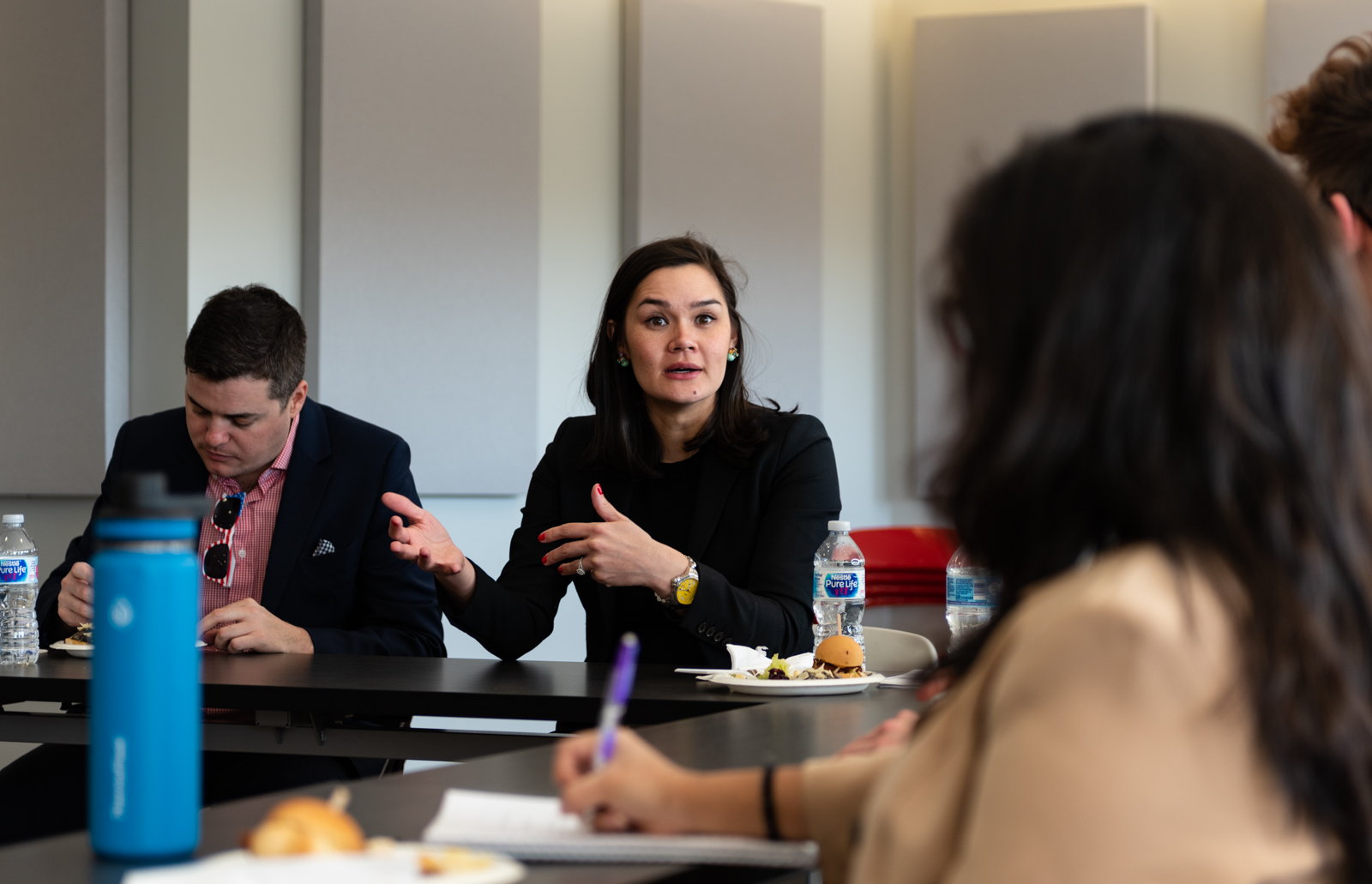 Michelle Giuda, who graduated from UCLA in 2008, spoke at the Luskin School of Public Affairs on Friday about her experiences studying at UCLA and working in the state department. (Axel Lopez/Assistant Photo editor)

The assistant secretary of state for public affairs for the United States encouraged students to pursue a career in the state department at an event Friday.

Michelle Giuda, who graduated from UCLA in 2008, spoke at the Luskin School of Public Affairs on Friday about her experiences studying at UCLA and working in the state department.

Giuda said her experiences at UCLA helped her to look beyond grades and academic performance and instead focus on how she could help address challenges facing the country. She said her classes inspired her to think creatively about political theories and situations.

“UCLA has a rigorous program that challenged me not just thinking about what the grades need to be, but about the material and any challenges that exist,” she said.

Giuda also served as the captain of the gymnastics team, which she said taught her the importance of leadership. She added the experience also taught her how to accept and cope with failure, as she was rejected from the team twice before being accepted.

She said Valorie Kondos Field, the UCLA gymnastics coach, influenced her the most and inspired her to become a leader in her career.

After graduating, Giuda worked for former Speaker of the United States House of Representatives Newt Gingrich’s communication team and his campaign for the 2012 presidency.

Giuda said her interest in local and international politics stemmed from her multicultural background.

Giuda’s mother and grandmother are from Vietnam and left before Saigon, the capital of what was then South Vietnam, was captured by the North Vietnamese army in 1975 during the Vietnam War. Her father was an American soldier who fought in the war. She said hearing about their experiences during the Vietnam War made her realize the importance of government and politics.

“The stories they told from their experiences in Vietnam, whether from an American perspective or my mother and grandmother’s perspectives as Vietnamese, really made me think that governments matter,” Giuda said. “To me, there was never really anything more important than politics. It determines how we live our lives and the degrees of freedom we experience every day.”

Giuda said all state department officials must avoid political leanings and uphold the constitution regardless of the president in office. She added policy proposals are debated at all levels in the department through a collaborative decision-making process before being presented to the president.

“It’s not as if the orders come from the top down from one person,” Giuda said. “There are policy meetings from the highest levels to the lowest levels to think through the pros and cons and the risks and the different solutions and alternatives to various policies.”

Cecilia Choi, the U.S. state department’s diplomat in residence for Southern California, Hawaii and Nevada, said she encourages students from all academic backgrounds to work for the state department, as the department’s overseas embassies need professionals from various fields – such as doctors, scientists, lawyers and architects – to function.

Choi cited how U.S. embassies in Haiti were some of the few buildings that had not collapsed during a recent earthquake because they had hired staff architects and construction engineers who ensured the buildings met construction codes.

“Because of that kind of care and diligence from our wonderful architects and construction engineers, nobody died in the U.S. embassies,” Choi said. “In fact, afterwards the EU staged its aid and development relief from U.S. property because their building had collapsed.”

Adah Perez, a second-year public affairs student who attended the event, said she was inspired to hear how Giuda’s multicultural background shaped her career and how state department officials are able to put aside political differences to work together.

“It is doable – she comes from a background of immigrants,” Perez said. “So I think that it is a really good demonstration of how we can leave our own personal biases aside to work efficiently.”

Perez said she wants to eventually run for public office to serve her community and increase Latino representation in all levels of government.

Giuda said she encourages students to challenge themselves in college and learn from those around them.

“If you are among people who are heads and shoulders above yourself, that’s great because you can learn from them so much,” Giuda said.