Met with a shoulder injury and severe pain, Madison Kocian muscled her way through 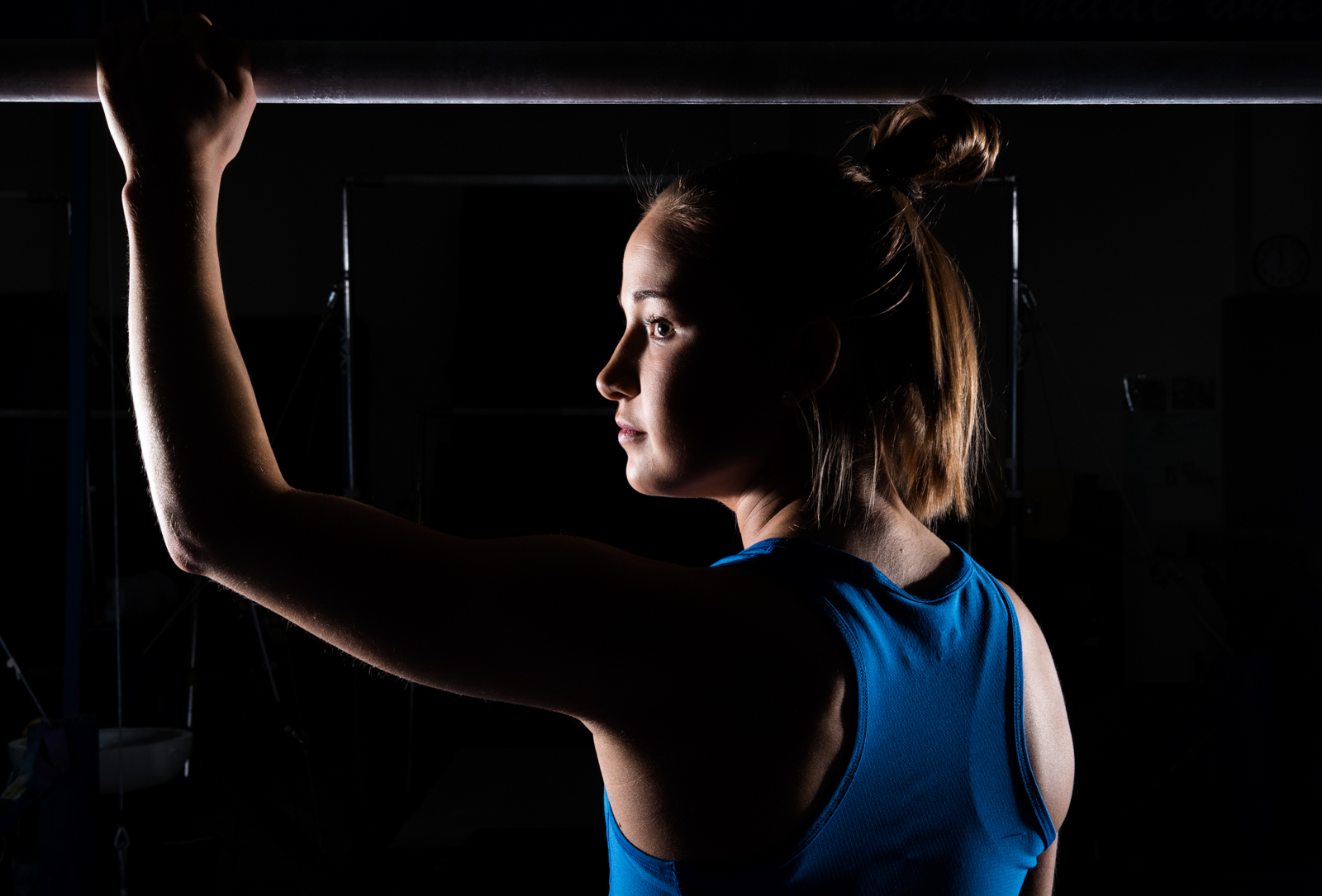 Junior Madison Kocian had shoulder surgery during her sophomore year at UCLA after tearing her labrum at the 2016 Olympic trials. (Liz Ketcham/Assistant Photo editor)

Madison Kocian kicked up into a handstand at the end of practice – something she couldn’t do a year ago.

But it took a long time to get there.

“I feel like everything really did happen for a reason,” said the former Olympian. “To not know if I was going to be able to compete or not, even though I had worked my whole life for (it), was so hard.”

On the final day of the 2016 Olympic trials, Kocian felt her shoulder tear during her uneven bars routine. She struggled to lift her arm the next day.

Kocian had less than a month at home to work through the pain before she boarded a plane for Rio de Janeiro.

In the Olympics, Kocian earned a team gold medal – the second consecutive win in U.S. history – and an individual silver medal on uneven bars, despite increasingly severe shoulder pain due to her torn labrum.

The following fall, she started her first year of college at UCLA.

Although Kocian knew immediately that she had torn her labrum, it wasn’t until she began her year with the Bruins that she finally had her shoulder imaged by medical professionals.

“At that point I was already really excited to compete my freshman season and finally be in college,” Kocian said. “We just tried to manage it as much as we could, nonsurgically.”

Kocian and her coaches decided that she would compete during her freshman season and forgo immediate invasive treatment.

“(I was) riding out the adrenaline,” Kocian said.

On Jan. 7, 2017, Kocian made history alongside then-freshman Kyla Ross as the first gold-medal winning Olympic gymnasts to compete at the collegiate level. During her first meet as a collegiate gymnast, Kocian competed in the all-around and won.

But the pain from her labrum tear was getting worse.

For Kocian, the gym was a sanctuary that she could go to when she wanted to relax, especially in the wake of her “Final Five” Olympic fame – but the pain took that away.

“I would come in and feel like I couldn’t do anything because I was in so much pain,” Kocian said. “My whole life felt overwhelmed, because I felt like I had no place to go. I was also trying to keep up on school, trying to figure out the social life and trying to figure out how I could manage my time and fit it all in. I didn’t want another thing.”

Kocian’s discomfort intensified with every meet and her coaches began to worry that there was another problem with her shoulder range.

By the 2017 NCAA championships, Kocian said she was in so much pain that she was willing to try anything.

Her doctors prescribed platelet-rich plasma injections. Kocian had her blood drawn and was then injected with a stronger concentration of her own platelets. She was told that it was supposed to accelerate healing in her tendons, ligaments, muscles and joints and she would start to feel the results in four weeks.

But it didn’t work.

With fear that she had more serious bicep damage and with the support of her coaches, Kocian scheduled surgery for August 2017 – the start of her sophomore year.

Kocian said she promised her team that she was going to be supportive in 2018, even if it was from the bench.

The then-sophomore decided that she would act as a team manager for as long as she wasn’t medically cleared to compete. This included moving the mats for her teammate’s routines and encouraging them from the sidelines.

“We called her ‘Coach Koc,’” Kondos Field said. “She jumped in to helping her teammates realize how amazing they are. She helped them figure their skills out and was there supporting them in that role.”

Despite a 10- to 12-month estimated recovery time that would take her out of the 2018 season, Kocian said she told her team she planned to be strong enough to compete on three events once she was six months post-surgery.

And she started to recover ahead of schedule.

“We all knew that she was going to do everything that she could to be back as quickly as possible,” Kondos Field said. “That included everything that we didn’t really see. She even changed her diet, which is absolutely remarkable. She did the research to figure out what would help her heal quicker and stronger. That’s taking being an athlete to the highest level.”

After sitting out of the Bruins’ first two meets of the 2018 season, Kocian competed on balance beam Jan. 20. By late February, she was competing on floor exercise.

On April 7, Kocian made her 2018 uneven bars debut at the NCAA Regional Championships – just over seven months after her surgery. She scored a 9.875, which tied for the fourth-highest score of the meet on bars.

“I was getting ahead of my rehab timeline,” Kocian said. “(Kondos Field) told me, ‘You don’t know when the last day of your gymnastics will be, so just live in the moment, take every day as you can and don’t take anything for granted.’ That was when I decided that I was going to compete, even if it was just for the last few meets.”

Kocian competed on beam, floor and bars in the entirety of the Bruins’ championship run, posting a 9.9375 on bars in the Super Six.

Kocian has been removed from the floor lineup during the 2019 season, but has competed on balance beam in nine out of 11 of the Bruins’ meets and on uneven bars in every meet this season.

Three meets into the season, Kocian posted her second career perfect 10 on uneven bars. She has averaged a 9.900 on uneven bars in 2019 and she is one of only three Bruins with a perfect score this season.

“This year I’ve focused on living in the moment and trying to be my best self and I think it has made all the difference,” Kocian said. “I’m a lot closer with my teammates and we’re laughing a lot more in the gym. I think that’s brought a different mindset when I go in to compete and I don’t put so much pressure on myself to be perfect.”

Aside from competition success, Kocian said she is dedicating the 2019 season to developing stronger relationships. She is sharing her first apartment this year with fellow juniors Ross, Felicia Hano and Mercedez Sanchez.

“She is breaking out of her shell more than ever before and she’s been a great role model,” Ross said. “She puts passion into everything she does – whether that’s school, gymnastics or just helping a friend. I’ve been able to see a different side of her this year, and it’s been really cool to be close to her through it all.”

In more ways than one, Kocian said she is the strongest she has been since she began her college career – and just in time for the 2019 postseason.

After defeating Utah State in their final home meet last weekend, Kocian and the rest of the Bruins will begin their postseason push for an opportunity for a repeat NCAA title at the Pac-12 championship March 23.

“I don’t regret anything that I’ve done in gymnastics and I definitely don’t regret any of my injuries,” Kocian said. “They’ve all helped me in one way or another – whether it taught me work ethic, perseverance or resilience – and those are more of what define me than anything else that I’ve gone through.”