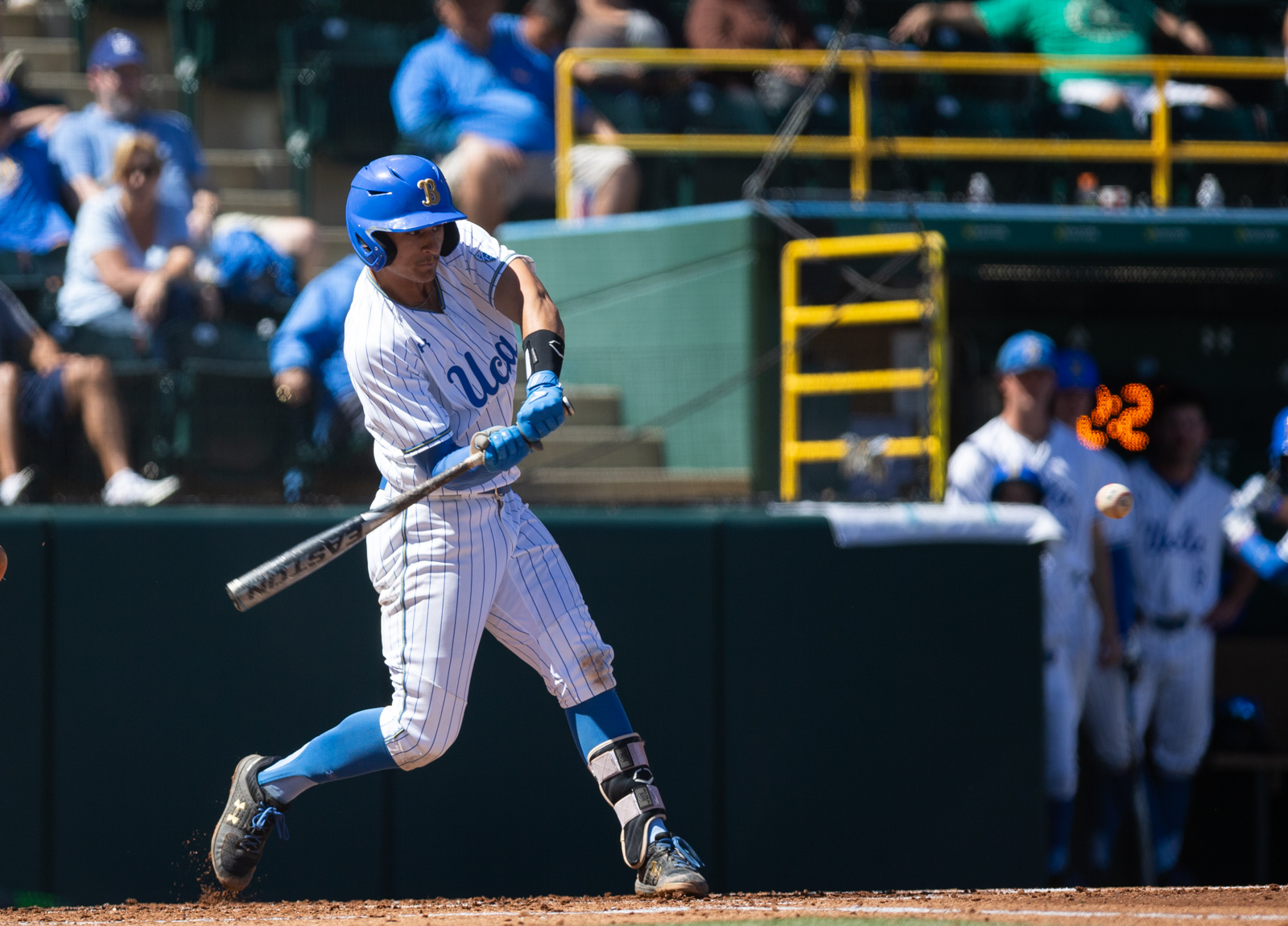 Junior second baseman Chase Strumpf picked up his third home run of the year with a two-run shot to left in the fifth. Strumpf hit .333 in the Bruins’ series victory over the No. 3 Beavers. (Andy Bao/Daily Bruin)

The Bruins claimed the series win in college baseball’s highest-ranked matchup of the season thus far.

“It wasn’t pretty, it wasn’t textbook,” said coach John Savage. “We were fortunate to get out of there with two wins.”

After scoring four runs in the ninth on Saturday night, the Beavers opened up Sunday with back-to-back solo home runs off freshman right-hander Jesse Bergin to go up 2-0.

RBI singles by juniors left fielder Jack Stronach and third baseman Ryan Kreidler in the bottom of the frame tied the game at two, prompting Oregon State to pull their starter and dip into their bullpen in the first inning. Junior first baseman Michael Toglia reached on a fielding error, bringing in Stronach and giving the Bruins the lead.

UCLA tacked on two more runs that inning to increase their lead to 5-2. Junior second baseman Chase Strumpf said the early response was part of the Bruins’ DNA.

“Big thing about our team is responding, so I think that was a perfect example,” Strumpf said. “It’s kind of like the staple of our team and kind of our identity that we’re trying to build, so it was good to see that.”

Bergin gave up two consecutive singles in the second that forced Savage to bring in junior right-hander Ryan Garcia. The freshman ended his day after 1 1/3 innings with two strikeouts, four hits and three runs allowed.

Bergin had his second consecutive short outing after giving up four runs in 2 1/3 innings in the Dodger Stadium College Baseball Classic last week against USC, but Savage said he is improving as he pitches with more aggression.

“I thought he made some mistakes (in) both games, but there’s different mistakes,” Savage said. “There’s aggressive mistakes and there’s cautious mistakes. I thought at Dodger Stadium he was cautious and today I thought he was aggressive. I think it was a step in the right direction.”

The first batter Garcia faced ripped an RBI double down the right field line that cut the UCLA lead to 5-3. On the next pitch, the junior hit a batter to load the bases with one out, before Garcia struck out the next two Beavers to escape the jam.

Garcia retired the next seven batters he faced before allowing a two-run home run to catcher Adley Rutschman – his second of the day and eighth of the season – to tie the game at five in the top of the fifth. The junior threw a total of 72 pitches, which he said was more than expected as he works his way back from injury.

“The plan originally was to go 40 pitches minimum,” Garcia said. “I was feeling good, so I told coach green light for a few more.”

The Bruins responded in the bottom of the fifth with a two-run home run to give them a 7-5 lead. Strumpf shot the ball over the left field wall. He said his recent struggles at the plate caused him to be more aggressive.

“I’ve been struggling a little bit driving balls in play, especially fastballs I’ve been missing a lot,” Strumpf said. “I was just trying to be aggressive throughout the day (and I) got a fastball up and put a pretty good swing on it.”

UCLA tacked on insurance runs with a solo shot from Toglia later in the fifth and a dropped fly ball in the sixth that plated sophomore shortstop Kevin Kendall.

The Beavers battled back to score one off redshirt senior right-hander Nate Hadley in the seventh and one off sophomore right-hander Holden Powell in the ninth, but could not overcome the Bruin lead.

UCLA will next take the field against Arizona (12-7) with a weekend home series starting Friday at 6 p.m.