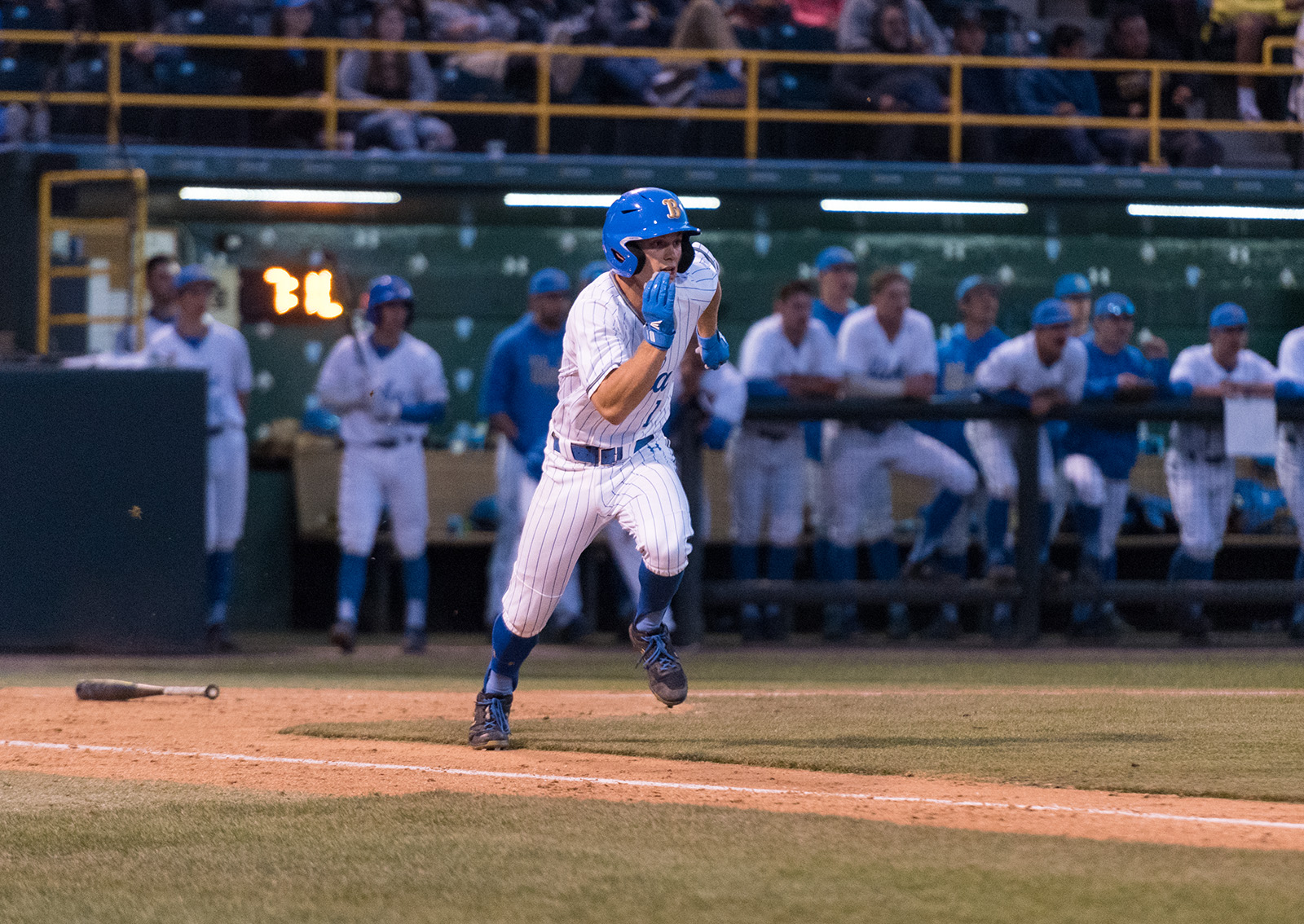 Freshman center fielder Matt McLain helped UCLA baseball take the lead in the fifth via an RBI triple to right. McLain scored on the next play, but he was the final Bruin to cross the plate Saturday night. (Liz Ketcham/Assistant Photo editor)

The Bruins had a rare ninth-inning collapse.

With the game tied 3-3, the Beavers loaded the bases on three walks issued by sophomore right-hander Holden Powell, before first baseman Alex McGarry stepped to the plate and knocked a single up the middle to give Oregon State its first lead of the series. Catcher Adley Rutschman followed it up with another single up the middle that plated two more, and a wild throw by UCLA’s junior first baseman Michael Toglia missed the glove of senior third baseman Jake Hirabayashi, allowing another run to cross the plate.

“We’ve ran out a good bullpen all year,” said coach John Savage. “Our bullpen’s really been one of our strengths. Powell just didn’t throw enough strikes in the ninth inning. If you don’t throw strikes, it’s really hard to get people out.”

Before the ninth, UCLA stayed neck-and-neck with Oregon State behind six innings of one-run ball by redshirt junior right-hander Jack Ralston, who pitched his way out of multiple jams.

Oregon State first threatened in the second inning, putting runners at second and third with two outs. However, Ralston struck out the final batter of the inning on a called third strike to make it out unscathed.

The Bruins took the lead in the bottom half of the inning with some help from the Beavers. With runners at first and third and one out, freshman center fielder Matt McLain sent a double play-ready ground ball to second baseman Ryan Ober. However, shortstop Beau Philip’s throw sailed over the first baseman’s head, allowing junior left fielder Jack Stronach to cross the plate to give UCLA a 1-0 lead.

The lead lasted just half of an inning, as Rutschman singled down the right field line to score infielder Wade Meckler and tally the first run of the series for Oregon State.

After a mound visit from Savage following his fifth walk of the night to put runners on at first and second in the top of the fifth, Ralston struck out the next batter to preserve the 1-1 tie.

“I liked the way I pitched out of the stretch to get out of problems,” Ralston said. “It’s always important to limit the damage.”

UCLA retook the lead in the bottom of the fifth, when Toglia led off with a double into the gap and McLain drove him in with a triple that soared over the center fielder’s head. Sophomore shortstop Kevin Kendall plated McLain with a ground out to the right side of the infield, putting the Bruins ahead 3-1.

Ralston capped off his night in the top of the 6th with his quickest inning of the game, retiring all three batters on nine pitches to notch his fourth quality start of the season.

“Whenever you go six and give up one, it’s really beyond a quality start,” Savage said of Ralston’s performance. “We don’t like the five walks, but he didn’t give up many hits. We take that start any day of the week.”

However, once redshirt senior right-hander Nathan Hadley relieved Ralston, Oregon State was able to tie it at three thanks to a no-doubter by McGarry that careened off of the Jack and Rhodine Gifford Hitting Facility in right.

The Bruins had a chance to take the lead again in the bottom of the eighth, when senior designated hitter Jake Pries stepped to the plate with runners at first and third and two outs. However, Pries struck out swinging and the teams stayed tied entering the ninth inning.

“We can always improve with runners in scoring position,” McLain said. “Obviously, you can never be perfect in baseball, but we could definitely improve.”

UCLA had one last chance to mount a comeback in the bottom of the ninth, but relief pitcher Brandon Eisert struck out the side to seal the game for Oregon State. Eisert pitched 4 2/3 scoreless innings in relief, striking out 10.

“(Eisert) clearly had his way with us,” Savage said. “He cut right through us. That was disappointing, but that’s the best I’ve seen him. … You’re talking about a guy coming out of the bullpen and putting a stop to the game.”

The Bruin bullpen surrendered six runs overall, after allowing seven runs in the team’s first 16 games. UCLA also lost for the first time this season when leading after the sixth inning.

UCLA will take the field for the rubber match against Oregon State on Sunday at 12 p.m. 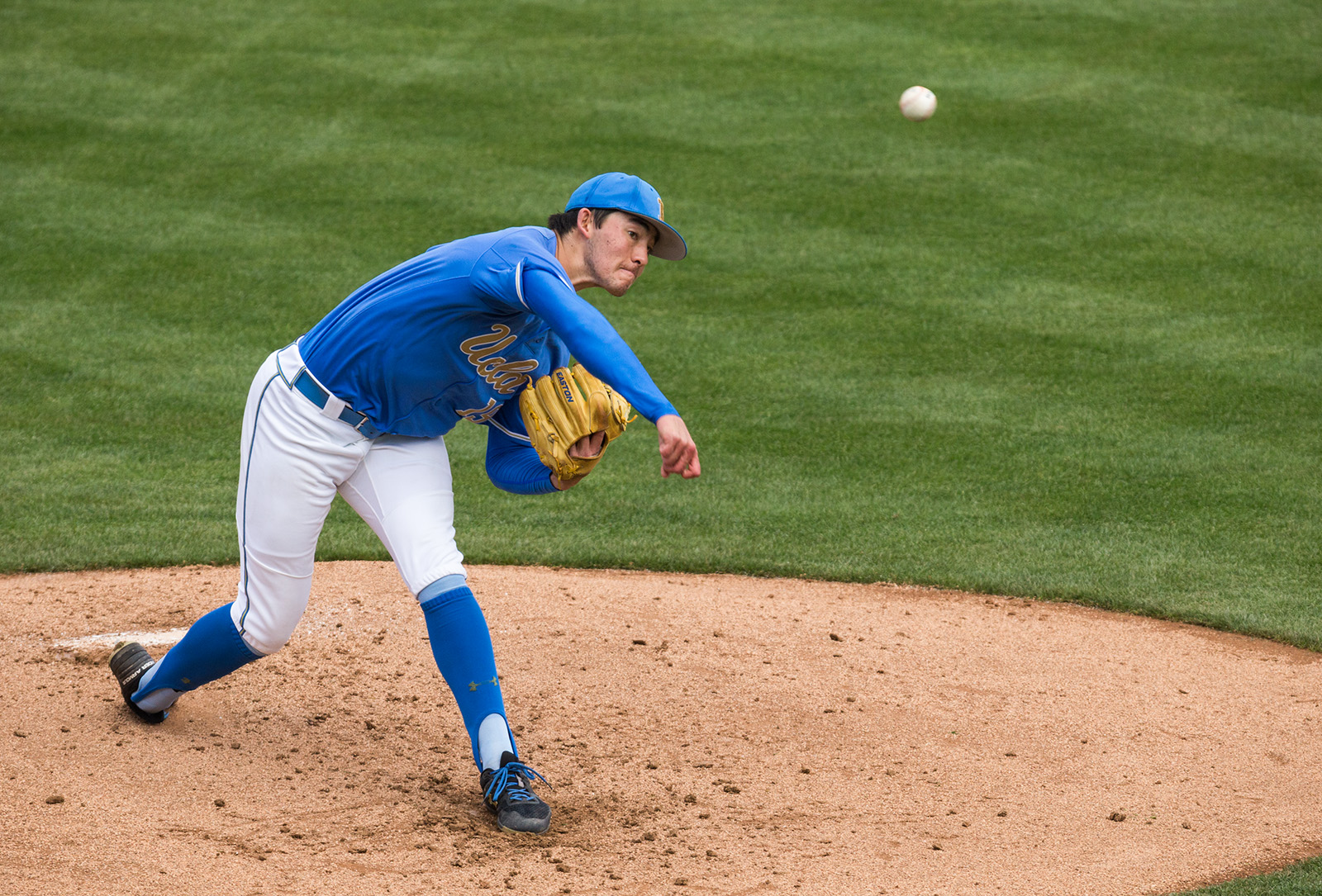