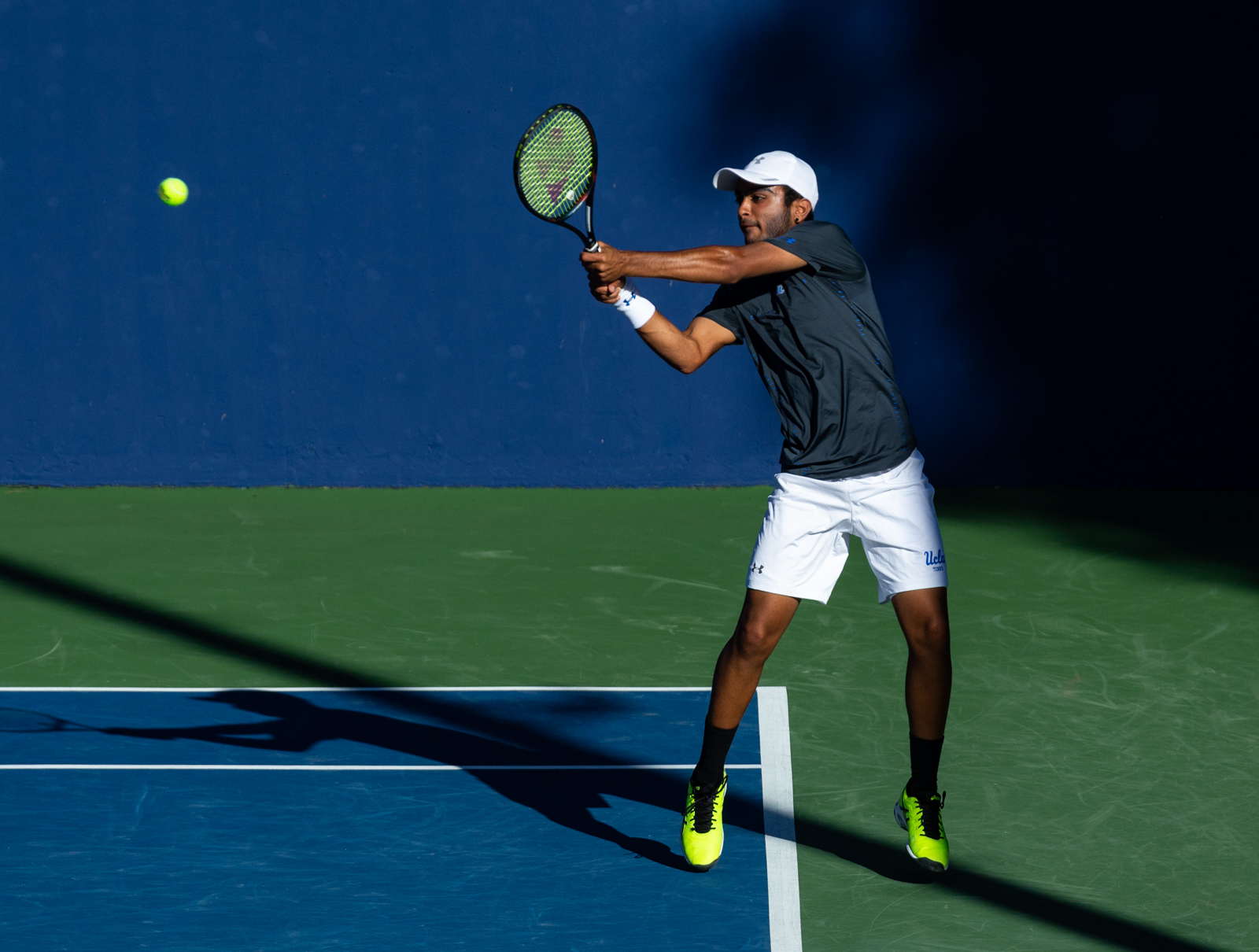 Freshman Govind Nanda has only lost two singles matches so far this season, switching between the No. 1, No. 2 and No. 3 singles spots in the lineup. Nanda claimed his ninth singles win of the season with a 6-0, 6-3 performance over UC Santa Barbara’s Victor Krustev. (Andy Bao/Daily Bruin)

No. 20 UCLA men’s tennis (7-4, 1-0 Pac-12) defeated UC Santa Barbara (6-5, 0-0) with a score of 5-2 on Thursday at the Los Angeles Tennis Center. After taking the doubles point, freshman Govind Nanda, freshman Patrick Zahraj and sophomore Keegan Smith won their singles decisions to clinch the match for the Bruins – followed by a singles victory by freshman Mathew Tsolakyan to round out the score.

No current Bruin has been on the roster since the home winning streak began in 2015. However, coach Billy Martin has been present for every match.

“I’d love 51, and maybe a few more,” Martin said. “We always want to be really dominant at home, and take care of our home turf. To the team’s credit, they’ve been doing it for years.”

Zahraj said while he wasn’t around for the streak, Martin has been sure to emphasize the importance of home wins for the Bruins.

“Coach reminds us about (the home winning streak) before every match here,” Zahraj said. “50-match winning streak is a hell of a time, and it shows how comfortable we are here playing in front our crowds and our courts.”

Nanda said the young team’s drive to keep the home-winning streak is from a duty to the teams and players before them.

“Obviously we don’t want to be the team that loses it,” Nanda said. “The team hears it and sees the numbers thrown around, and we’re just doing our best to keep it going.”

The match against UCSB started off with three competitive doubles matches. Nanda and redshirt sophomore Connor Rapp came up short at No. 2 doubles, losing 7-5.

However, UCLA’s No. 1 and No. 3 teams both claimed wins in tiebreaks. Senior Maxime Cressy and Smith bested the No. 72 doubles team in the country and all eyes turned to court three.

Zahraj and sophomore Bryce Pereira led the match 3-0, trailed 5-4 after three match points and ultimately won the tiebreak 7-5 after a backhand crosscourt return by Zahraj forced an error from the No. 80 ranked UCSB doubles team.

“It was a rollercoaster to be honest,” Zahraj said. “Big credit to (Pereira) for stepping up and serving big for us to stay in the match. On that last point, I’m just happy that the return went in and he missed it.”

This doubles victory broke a four-match losing streak for the duo, which Zahraj said gave him confidence in his 6-3, 6-2 singles win.

“The doubles was a confidence booster to be able to step up in singles,” Zahraj said. “It was nice to see things paying off finally, and hopefully things will continue on that path.”

Martin said it was good to see Zahraj step up and win matches because UCLA will need him to perform well against elite teams.

“I’m really happy to see (Zahraj) win singles and doubles,” Martin said. “Those are super important for us, and I think that’s the first time he’s done that. Hopefully it gave a good turnover and that’s what he needed, a little confidence.”

Martin also said the reliability of another freshman, Nanda, has contributed to the Bruins’ success this season.

“No one has been more solid than Govind Nanda,” Martin said. “He’s taken over the role that (Smith) had last year where we can go into matches assuming Govind’s gonna win. He’s really been the Rock of Gibraltar.”

Nanda’s outing at No. 3 singles was quick, winning 6-0, 6-3, featuring a first set that lasted only 20 minutes. Nanda said his defeat of UCSB’s No. 94 ranked Victor Krustev was keyed by his concentration.

“I’ve been trying to focus on every single point,” Nanda said. “I kind of go in and out sometimes and it’s hard for me to stay focused all the time, but I think I did a good job of that today.”

UCLA has some time off before its next match against Loyola Marymount University on March 26, when they have a chance to secure win number 51. 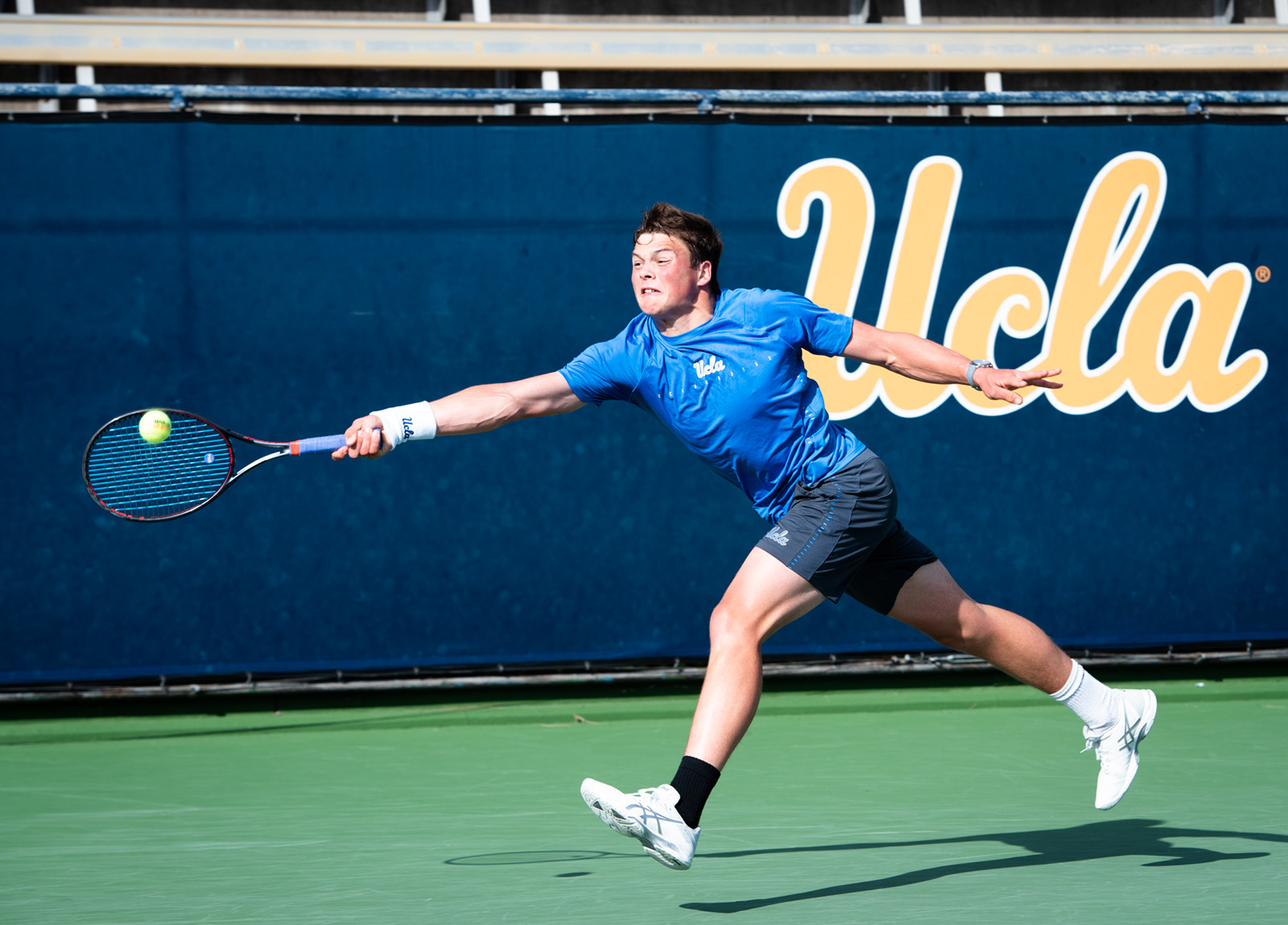 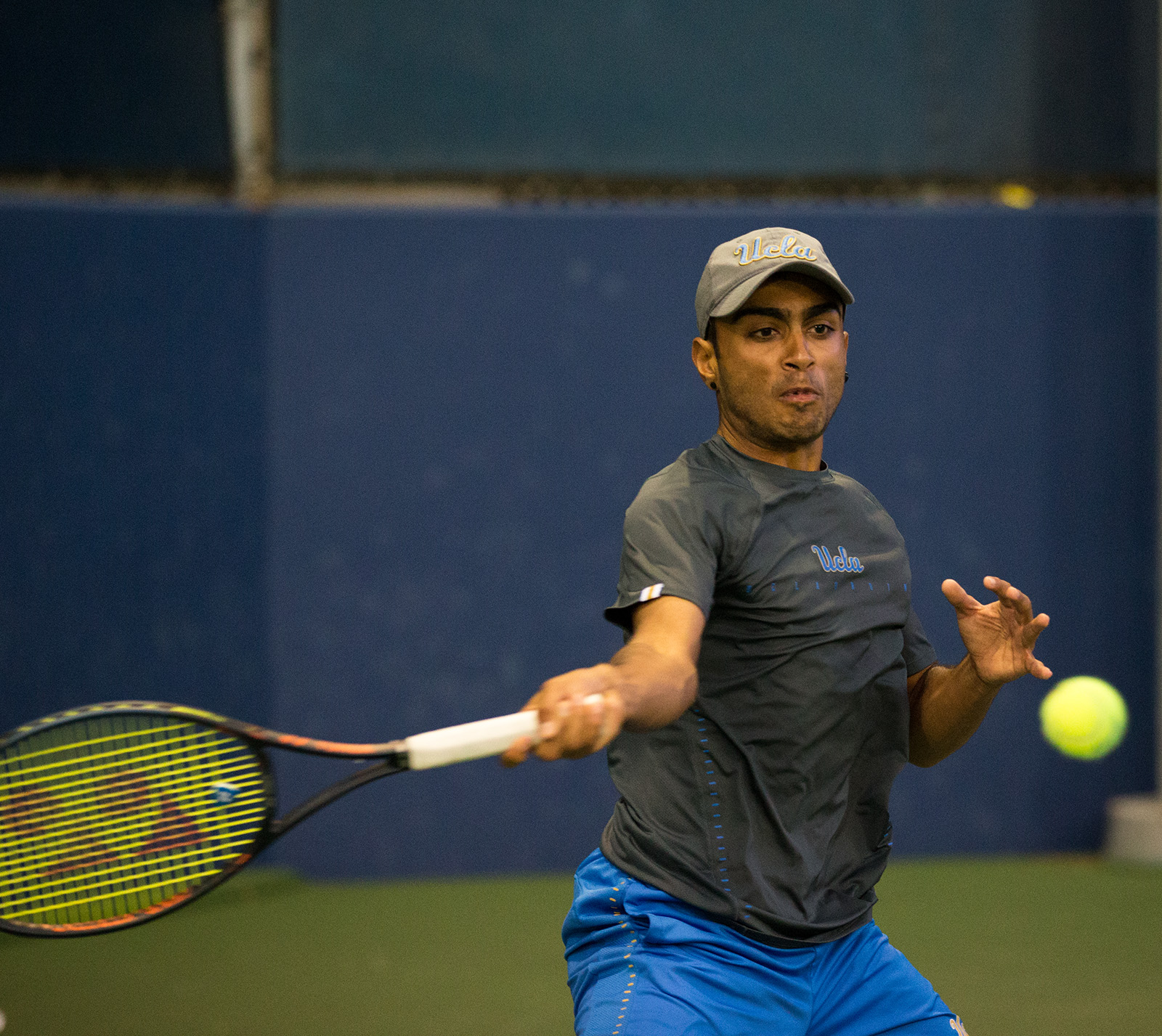 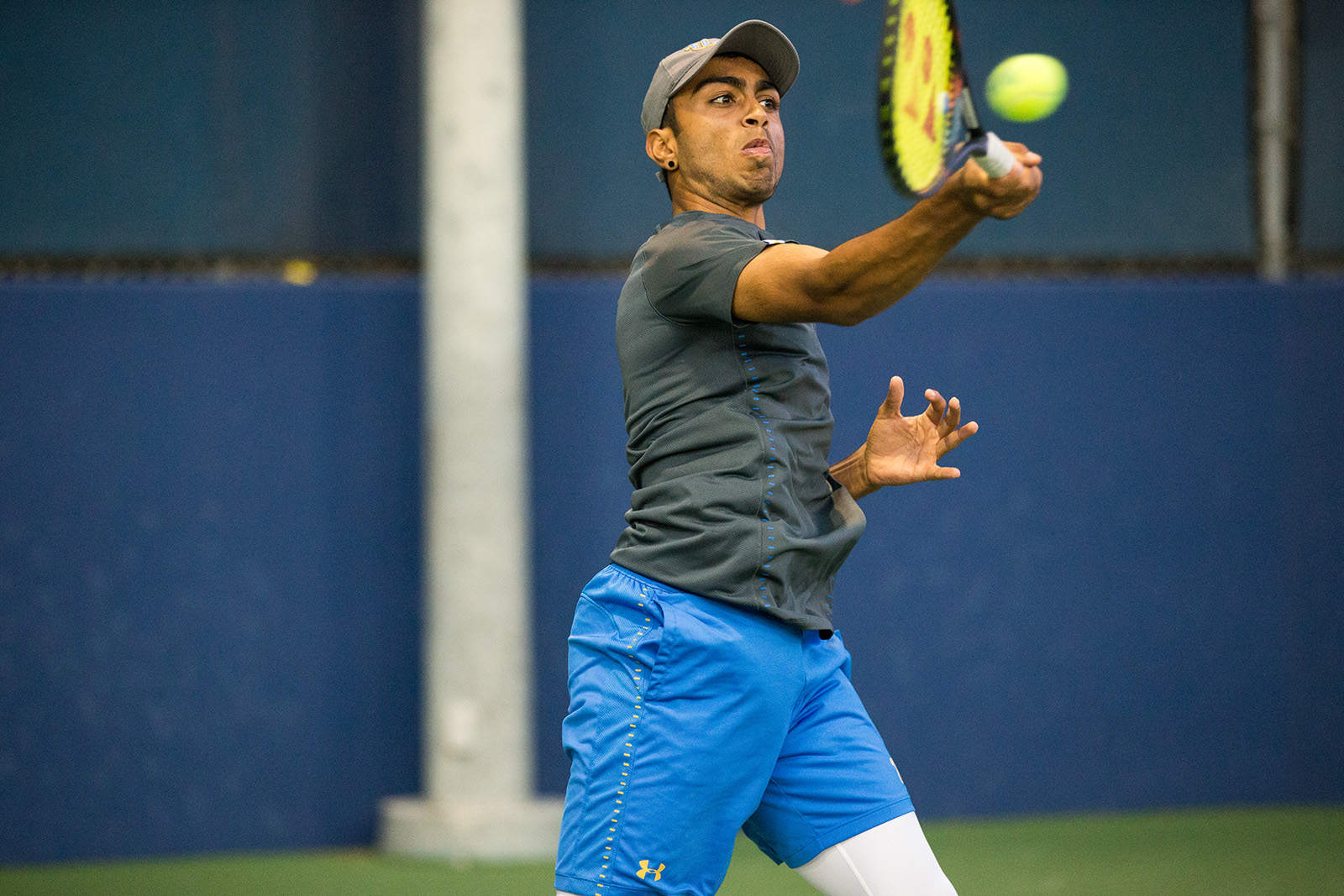 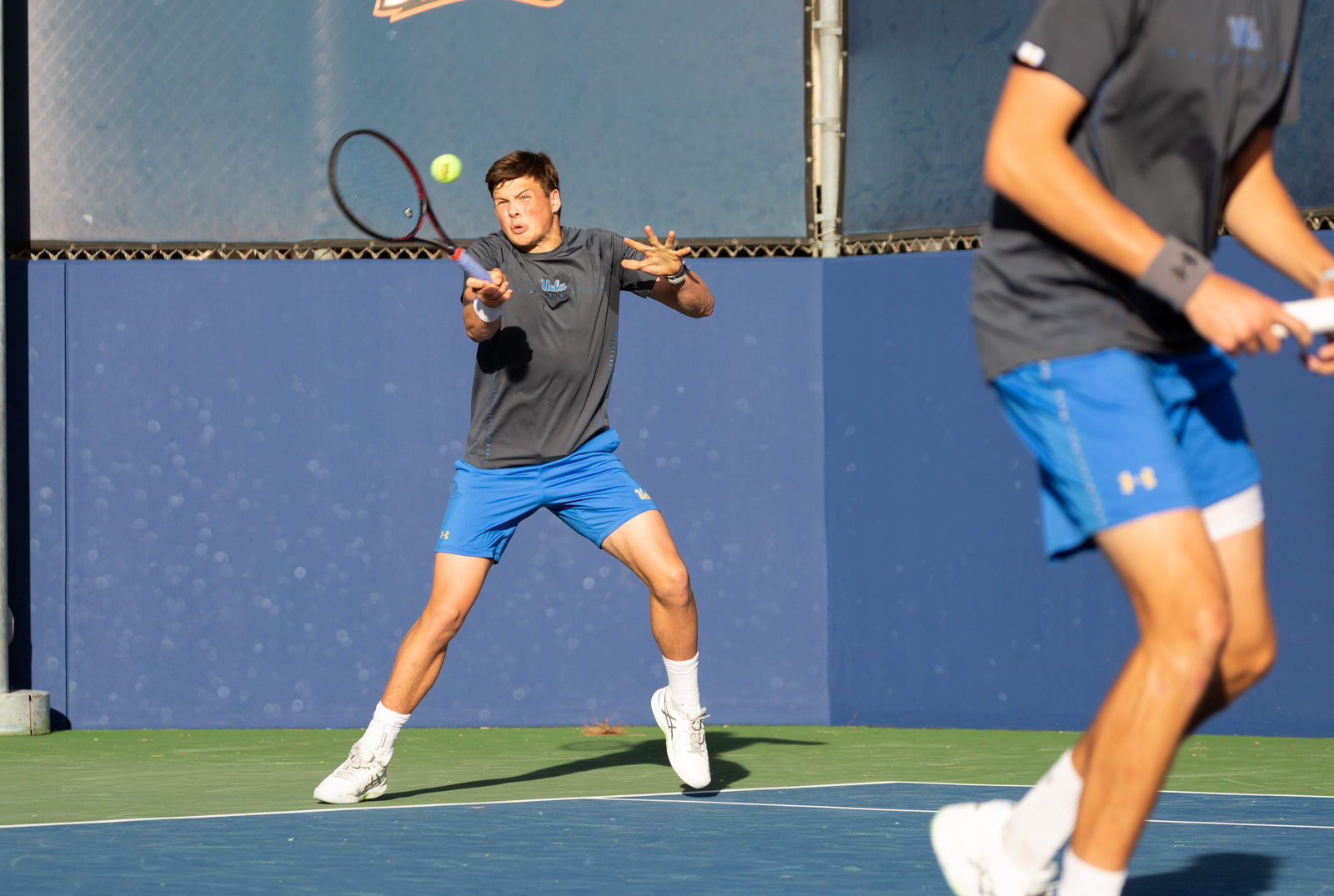