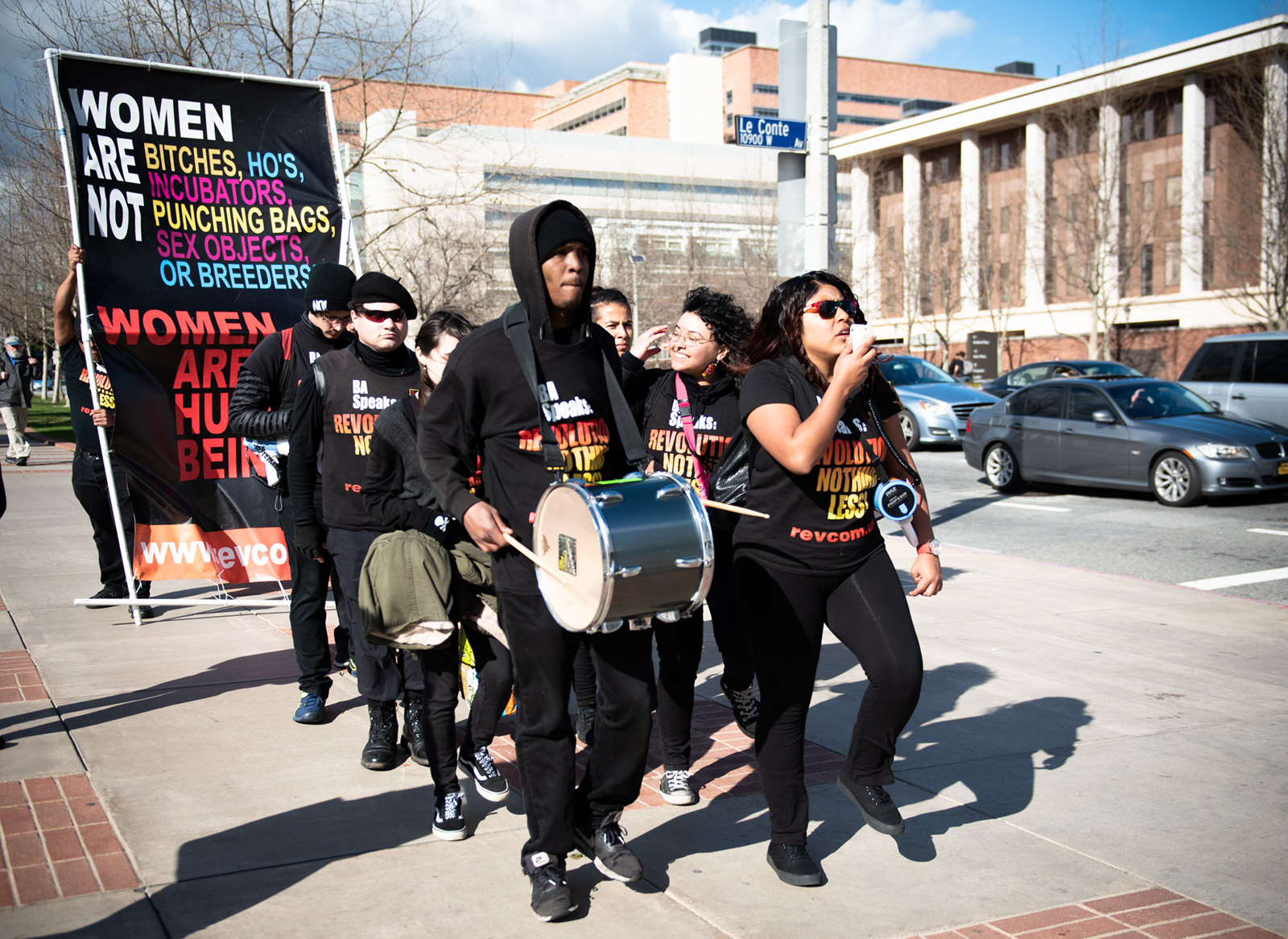 Students and locals marched through Westwood for International Women’s Day on Friday.

About 35 people walked on the streets to show their support for universal women’s rights, briefly disrupting traffic. The group also marched to commemorate the 40th anniversary of a 1979 protest led by the Communist Party of Iran in which Iranian women protested against being forced to wear hijabs.

The Revolution Club at UCLA, the local segment of a national group representing the Revolutionary Communist Party, USA, worked with the Los Angeles club to organize the Westwood march, said Tala Deloria, a sixth-year geography student and member of the group.

“We are aiming to end all antagonistic divisions between humanity throughout the world,” Deloria said. “That’s the white supremacy, the patriarchy, all of it.”

AJ Jamaal, an organizer of the march, said the group chose to demonstrate in Westwood because of the prominent Iranian and Persian community in the area.

Phil Lee, a Los Angeles Police Department officer, said LAPD was informed of the march by the Revolution Club.

Fifty LAPD officers were scattered across Westwood to maintain order during the march, Lee said. Several officers were tasked with intermittently closing streets, directing traffic and riding on motorcycles alongside the marchers.

Administrative Vice Chancellor Michael Beck said in an email that traffic was expected to be heavily impacted during the march.

Kaitlyn Manuel, a fourth-year anthropology student, was walking to her apartment when she noticed the marchers along the street. Manuel said she had never participated in a march and was interested in a flyer the demonstrators had passed out about the 40th anniversary of the Iranian women’s uprising.

Luna Hernandez, a UCLA alumna and member of the Revolution Club, said she marched to support all women around the world.

“This is a quote from our leader Bob Avakian: ‘You can’t break all the chains except one, you can’t keep women enslaved to the other half of humanity,'” she said.

Chantelle Eastman, a North Westwood Neighborhood Council member and a development coordinator for the UCLA department of neurology, said she has participated in International Women’s Day events for the past several years and decided to participate in the march because it was in Westwood.

“I’ve been in a lot of male-dominated spaces throughout my life. A lot of times I’ve been the only female in the room,” Eastman said. “We need a lot more women to be visible, so I came out to add to it.”