Visiting professor discusses how to incentivize behaviors through economic theory 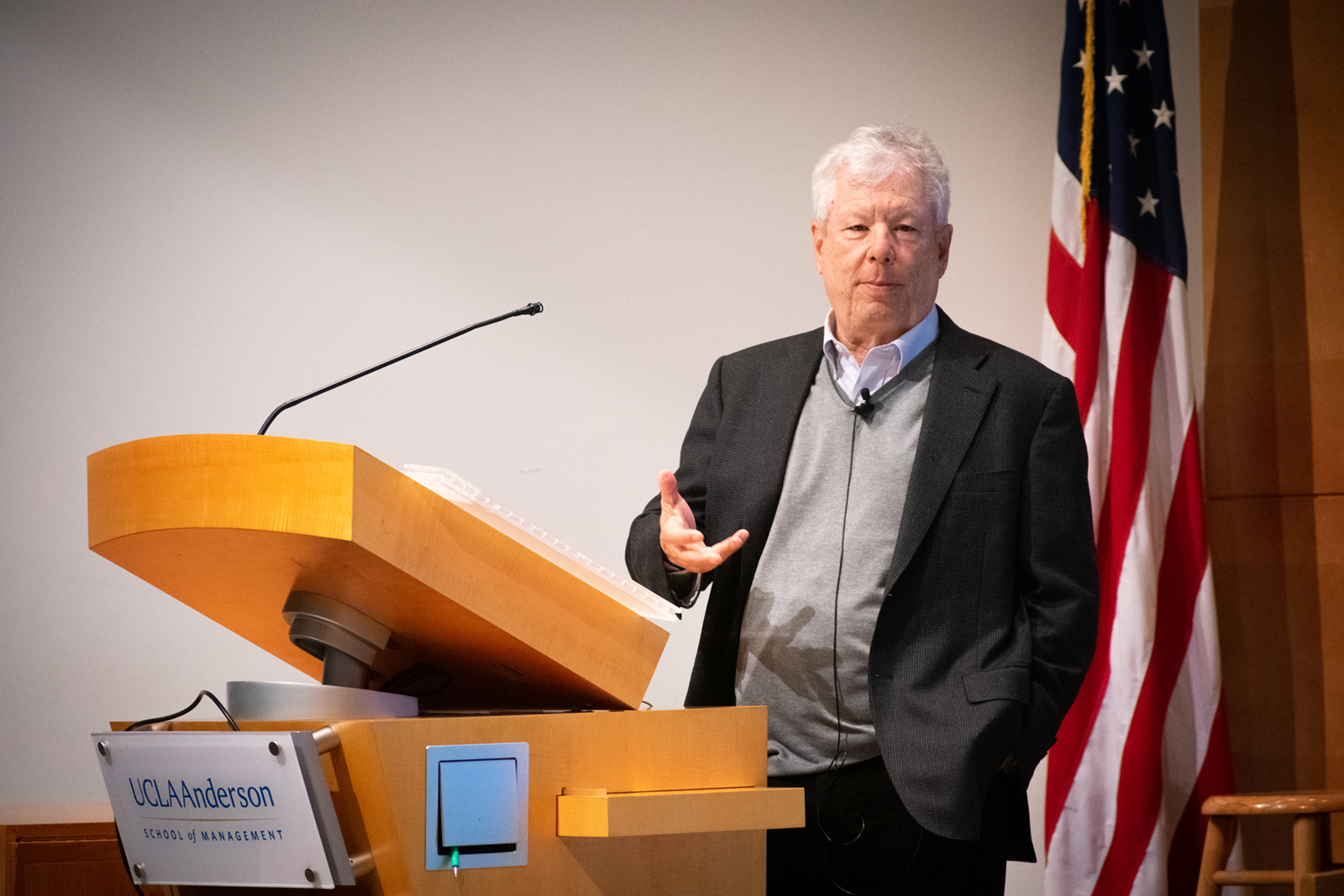 Richard Thaler, an American economist and 2017 Nobel Memorial Prize winner, spoke at the UCLA Anderson School of Management on Tuesday about the use of behavioral economics, particularly the use of “nudges,” to incentivize certain behaviors. (Daanish Bhatti/Daily Bruin)

A Nobel Memorial Prize winner in economics said companies can incentivize people to act in a particular way by taking advantage of the assumption that people would prefer to continue on the same course of action when faced with a decision.

Richard Thaler, the winner of the 2017 Nobel Memorial Prize in Economic Sciences and a distinguished service professor of behavioral science and economics at the University of Chicago, spoke at the UCLA Anderson School of Management on Tuesday about the use of behavioral economics, particularly “nudges,” to incentivize certain behaviors.

Thaler said nudges are incentives that lead people to make economic decisions based on factors such as environmental cues present when decisions are made.

He said, for example, the layouts of grocery stores or menus are designed to nudge people toward the most profitable items the store or restaurant sells.

Thaler added the Save More Tomorrow program, a behavioral program he co-pioneered to help employees save money for retirement, builds upon the human tendency to do nothing, as people within the program would automatically reap the benefits unless they made the active decision to opt out of the program.

He said the concept of nudges can be applied to private businesses.

Thaler gave the example of an advertisement that says an individual only has to pay a small fee to receive a 30-day free trial, but states in fine print users must cancel within the first 15 days to stop the subscription and avoid paying more. Since most people would not make the effort to cancel the subscription, the advertisement succeeds in nudging customers to sign up for the service and pay more money.

“Most people would not choose to opt out and would continue paying,” he said.

Thaler added he thinks businesses should be more transparent about their use of nudges so researchers can gauge whether people make decisions differently when they are more aware of these influences on their behavior.

He said he has spent the last 40 years studying aspects of human decision-making that most consider to be irrelevant, such as dinner and wine choices. He added that the impact of autonomy, decision-making and self-control can be viewed through an economic lens.

Thaler added his idea of behavioral economics builds on the basic optimization strategy of neoclassical economics, which is based on the concept of Homo economicus. Homo economicus is a hypothetical portrayal of a person who rationally prioritizes optimized solutions entirely based on self-interest and unbiased beliefs.

“Our biggest question is whether Homo sapiens resemble Homo economicus and, if there are any differences, how big the disparities are,” Thaler said.

Behavioral economics modifies classical theory by noting that humans may not always prioritize optimized solutions due to variations in human intelligence and the difficulty of tasks, he said. However, he added these standard neoclassical models can provide the basis of future economic fields and inquiries.

“I learned a lot about the ways people make choices,” Prajapati said. “My exposure to economic theory is limited, but I always thought the idea of people making rational decisions and making choices based on what is optimal to them was weird to me.”

“Like in this model, having my cell phone right by me when I study is a nudge for me to look at it, but instead I can change the default by putting it super far away. Or even having my tennis shoes right next to the door right when I wake up as a nudge to exercise,” Mathew said. “It’s those little things that were useful for me, so that I can be a better student.”