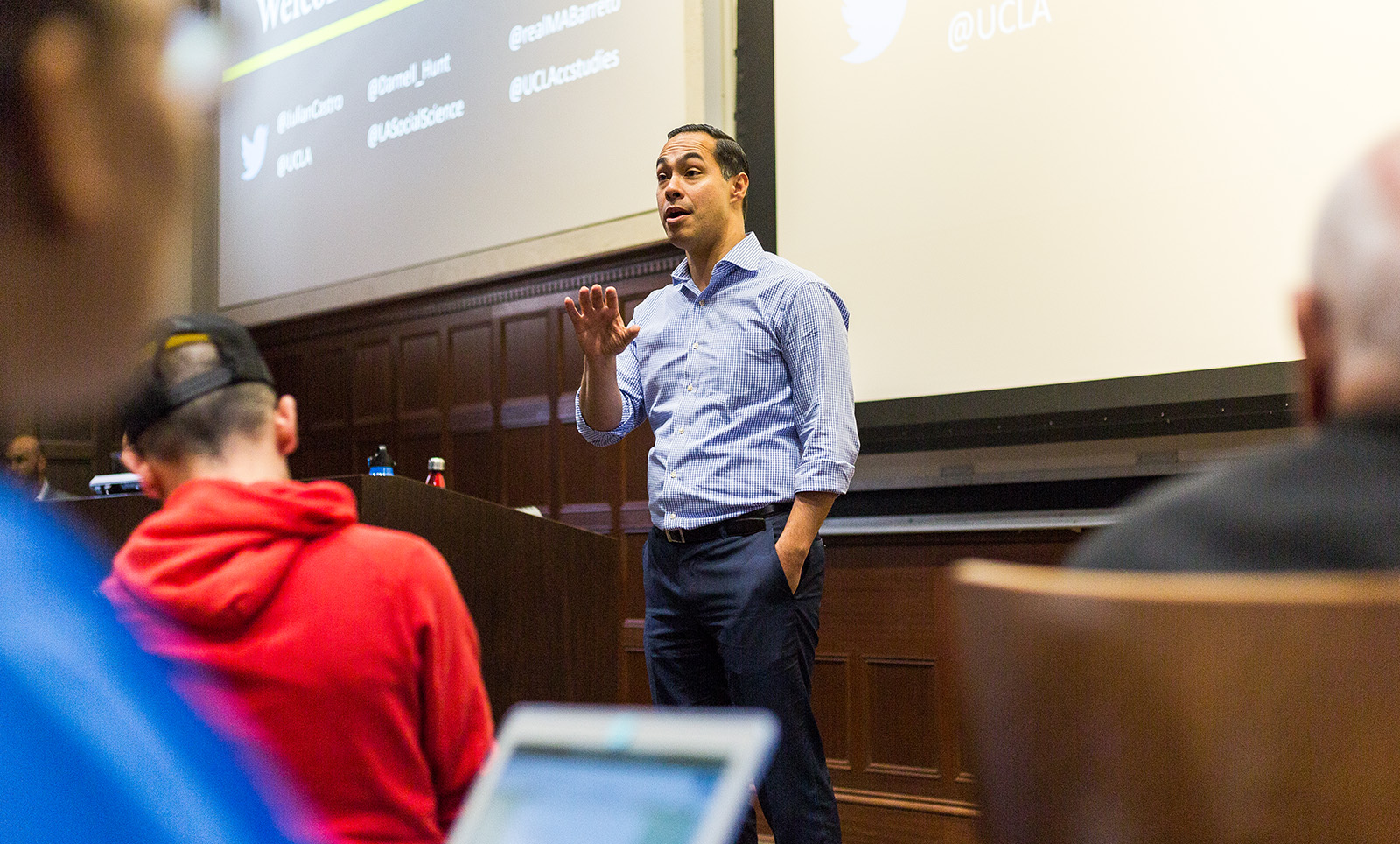 Julián Castro, a 2020 presidential candidate, spoke to a Chicana and Chicano studies class Monday about his positions on specific policies, his family background and his qualifications. (Kristie-Valerie Hoang/Daily Bruin senior staff)

A candidate for the 2020 presidential election explained his position on various policies, including health care, education and foreign affairs on campus Monday.

Julián Castro, former mayor of San Antonio and former United States secretary of housing and urban development under former President Barack Obama, spoke to a Chicana and Chicano studies class about his positions on specific policies, his family background and his qualifications.

Matt Barreto, professor of political science and Chicana and Chicano studies, invited Castro to his class, and said it was a great opportunity for students to meet a politician and learn about his policies.

“It was a chance to ask him questions about his policies, where he stands on the issues, so hopefully we can all be more informed voters,” Barreto said. “Hopefully all these students will go out and vote for whichever candidate they think is best.”

Castro launched his campaign for the Democrat nomination Jan. 12 in his hometown of San Antonio.

Castro said he is running for president because he wants to ensure that every person in the U.S. has the same opportunities he was granted.

“I want to ensure in the years to come that no matter who you are, what you look like or where you come from, you can reach your dreams too,” Castro said.

Darnell Hunt, dean of the division of social sciences, introduced Castro on behalf of the administration and explained how UCLA students have unique educational opportunities due to the diversity of Los Angeles.

“We are blessed to be in one of the most culturally diverse places in the world, Los Angeles. LA is a portal to the rest of the world,” Hunt said. “Take advantage of its opportunities.”

Castro said he has pledged to visit all 50 states during his campaign and will not accept any money from corporate political action committees or federal lobbyists, as most other candidates have similarly stated.

With regards to education, he added he wants to increase pay for teachers, reduce class sizes, and make pre-K and higher education universal.

“Oftentimes we are ready to invest in things, such as roads, airports and bridges, but we need to invest in people,” Castro said. “I believe we need to make pre-K universal in the entire United States so that every child can get off to the same strong start.”

Castro also addressed his position on minimum wage, which he said he thinks should be raised so people can afford basic necessities.

“I believe that if we’re going to be the most prosperous nation on earth, it should be prosperous for everybody,” Castro said. “We need to raise the minimum wage to $15 per hour so that people don’t have to work two or three jobs to pay their rent or put food on the table.”

“We have to fix the system for people seeking asylum or refugee status or (who) are fleeing countries that have experienced natural disasters or people who built lives here for 10, 20 or 30 years and are every bit American,” Castro said.

Barreto said he thinks Castro’s stances on Deferred Action for Childhood Arrivals and immigration reform will become some of the focal points of his campaign.

“Those seemed to be the ones that got the largest reaction from the audience and those are the ones that I think all the candidates will be taking a side on,” Barreto said.

Maya Hernandez, a first-year psychology student, said she will continue to follow Castro’s campaign up until the primary elections in June.

“I am actually inspired by him not just because he is a Latino, but because he is willing to do so much for the community,” Hernandez said, “Especially in light of the Trump administration, what he says is an important reversal from the current policies.”

Jennifer Perez, a fourth-year environmental science student, said she is excited to see increased Latino representation in politics but thinks people should be wary of many politicians’ lack of transparency.

“We have to be aware of what positions they are taking and where they stand on policies that directly affect the livelihood of our communities,” Perez said. “It is important that they are more specific on their issues and not necessarily just giving us a bunch of cliches and platitudes to placate us.”

Castro said he is running for president because he believes the country needs a new leader who represents the public’s interests.

“We need new energy and new leadership. And, I believe in the 21st century, this country needs to lead and be the smartest, healthiest and most prosperous nation,” Castro said. 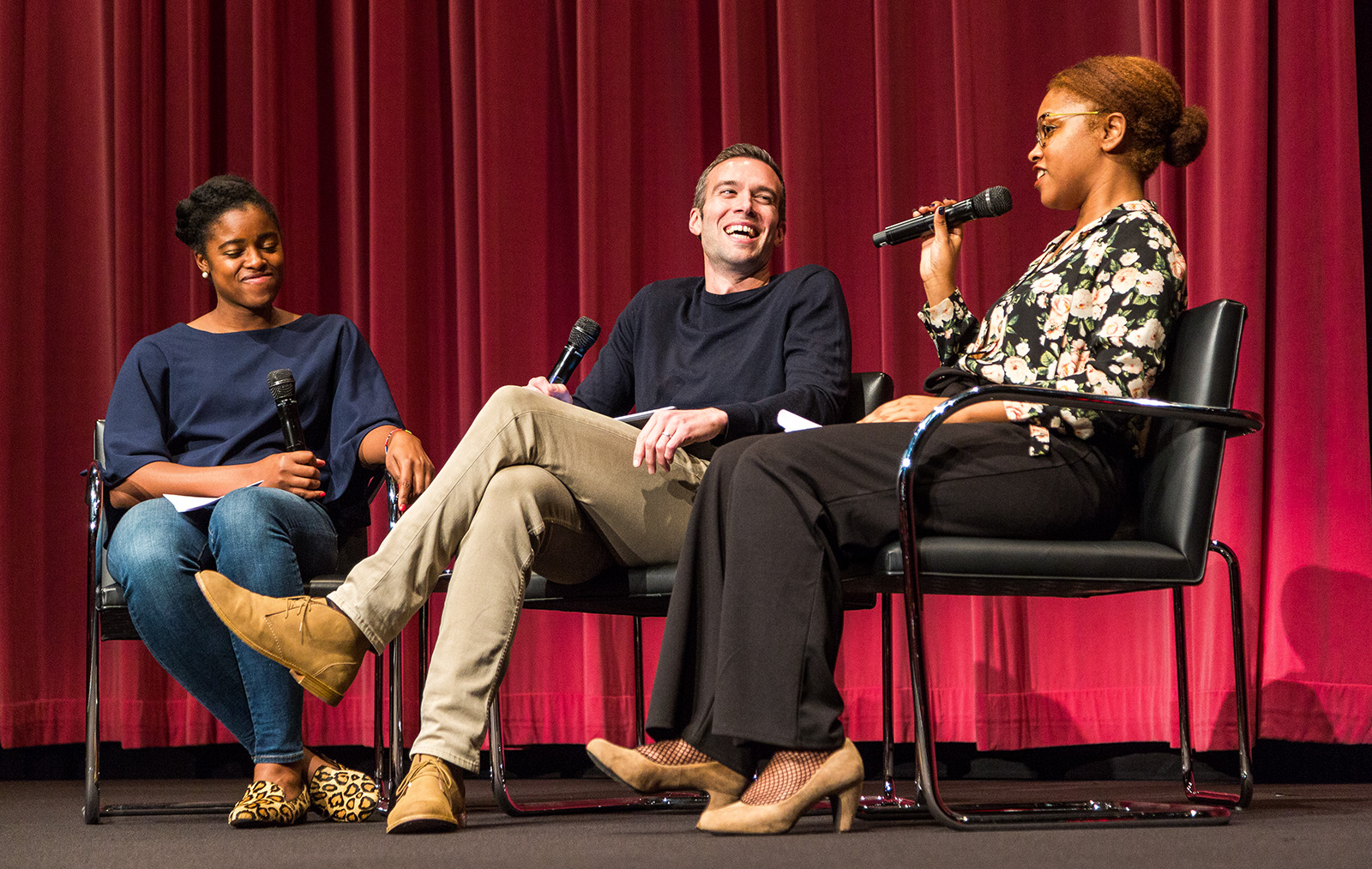