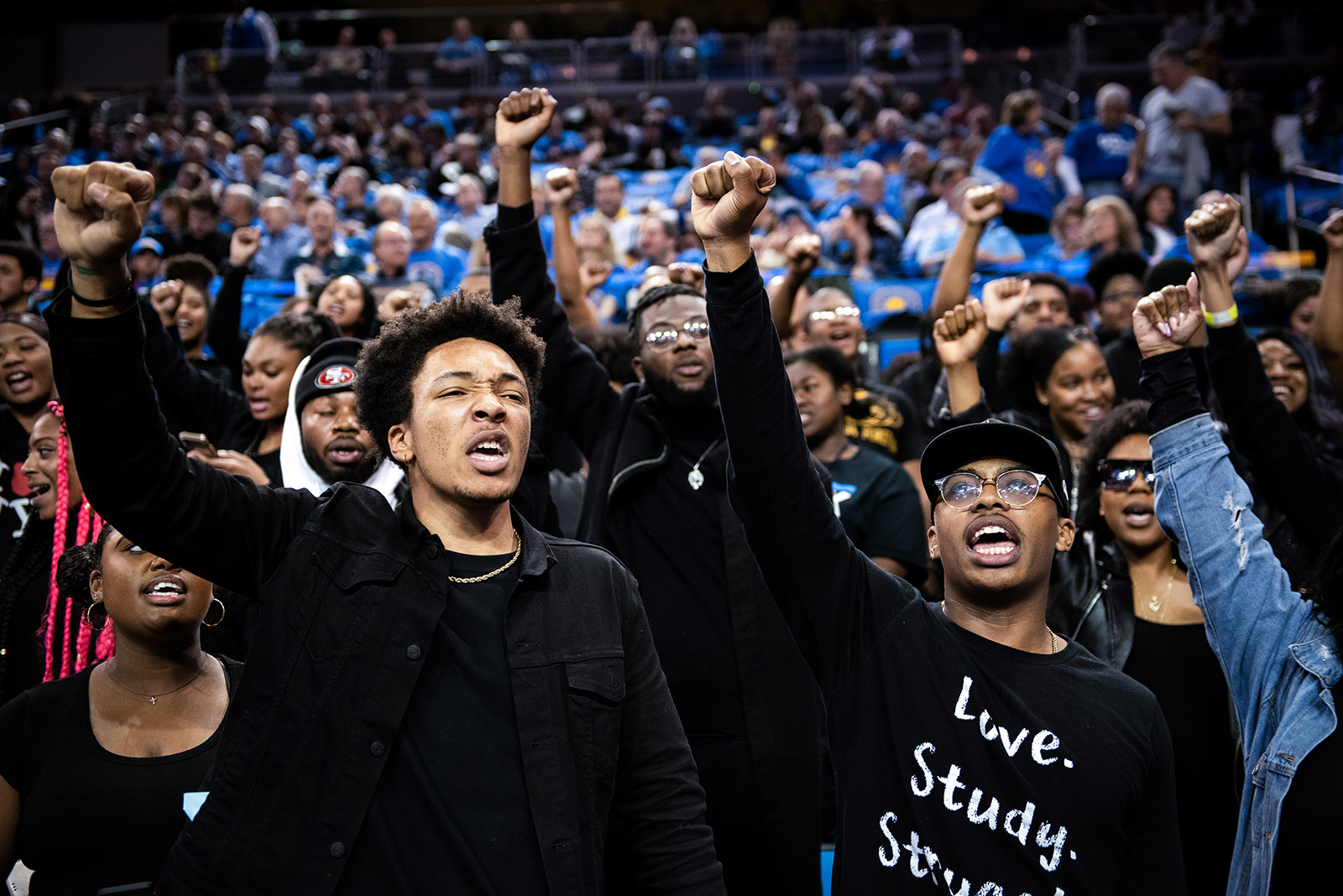 Students in the African Student Union demonstrated at the men’s basketball game Thursday to express discontent with how UCLA has addressed the interests of African-American students. (Michael Zshornack/Daily Bruin senior staff)

A student organization demonstrated during a basketball game Thursday to push UCLA to better address cases of racial discrimination on campus and increase funding for African-American student groups.

UCLA organized a “Blue Out,” handing out blue T-shirts for people in the crowd to put on. Demonstrators wore all-black instead.

The demonstrators occupied front-row seats at the game, stood up and raised their fists during the national anthem and walked out during halftime.

ASU organized the demonstration because they think UCLA has failed to create a campus environment that protects black students and fosters their academic success, according to an ASU press release.

“We’re demonstrating for the lack of support of the Afrikan Student Union in its regular daily program and lack of support in general for black students on this campus,” Njoku said.

Njoku said African-American students were made to feel unsafe in several incidents that occurred in the university apartments during fall quarter.

One incident, in which a female African-American student was questioned for her presence in the apartment complex by an employee, prompted an address by Chancellor Gene Block.

He added one of ASU’s demands is for UCLA to create a committee or position responsible for investigating such incidents of student discrimination.

“It’s an environment that is not conducive to black students’ success,” Njoku said.

Julia Robinson, a third-year political science student and chief of staff of the Undergraduate Students Association Council internal vice president, said ASU has been ironing out community policies and actions in university housing with the Office of Equity, Diversity and Inclusion, the UCLA Black Alumni Association and the Black Graduate Student Association.

The ASU also demanded a $40 million endowment for a black resource center, according to the press release.

The resource center would centralize African-American organizations under a single entity, and provide adequate funding for those programs with the endowment.

Robinson said she thinks UCLA should be able to contribute funds for the resource center now that it has raised $4.6 billion for its Centennial Campaign.

“Apparently, the fundraising was going to go partly to student organizations, so ASU is going to ask for a large chunk of the surplus to go towards financing a building for the center,” Robinson said.

According to a 2013 University of California survey, African-American students have the lowest four-year graduation rates among other races at UCLA at 57.6 percent. Njoku said the black resource center would aim to address this problem.

Njoku said he thinks the demands are reasonable and attainable, but acknowledged that achieving ASU’s goals, especially the black resource center, would require lengthy negotiation and cooperation with the university.

“These conversations have been fruitful to an extent, but it’s not enough,” Njoku said. “There have been movements made, but there hasn’t been the entire fruition of the things that we’d like.”

Njoku said he hopes UCLA will meet ASU’s demands and help ASU further its goal of fostering academic success and a sense of belonging for black students.

“Hopefully we heighten the retention rates, graduation rates of black students and improve their comfortability at UCLA,” Njoku said.

“We recognize the persistence of racism in American life and the impacts of racism on African-American Bruins, and we take sincere and meaningful actions to address concerns when made aware of them,” Tamberg said.

ASU expects UCLA to respond to their demands by March 5, according to the ASU press release.