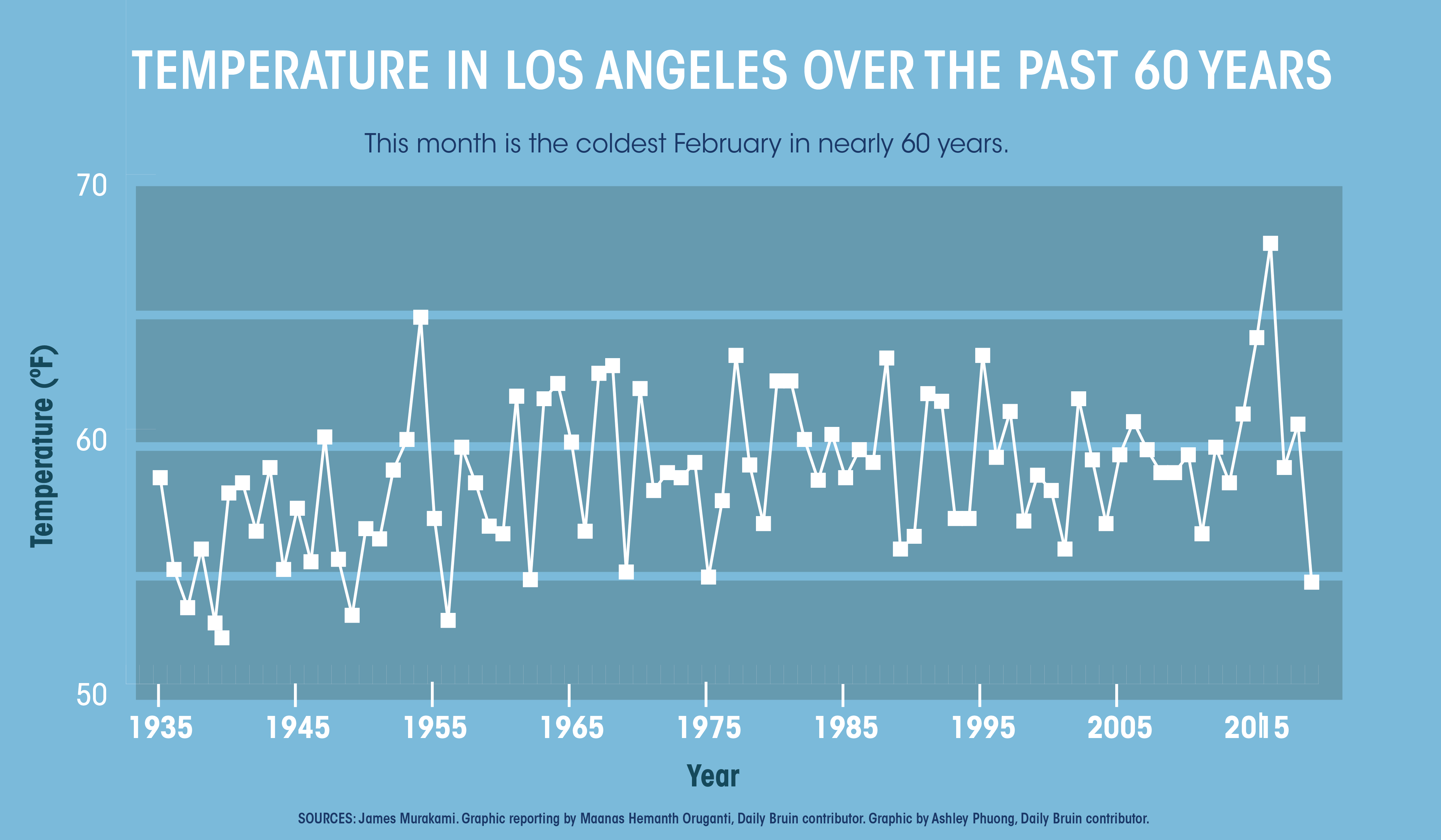 Los Angeles’ climate is getting warmer, not colder, despite snow, lower temperatures and increased precipitation this month.

This February has been the coldest in nearly 60 years, with the average temperature in LA this month falling five degrees lower than the normal average. However, Neil Berg, associate director of science at UCLA’s Center for Climate Science, said the climate in LA is still getting warmer despite this temporary cold period.

“The climate is getting warmer and this is just a part of our normal winter weather,” Berg said. “We’re just in a cool, wet winter this time, but it’s not part of a larger trend that we’d expect under climate change.”

James Murakami, a staff meteorologist in the atmospheric and oceanic sciences department, said while this February has been cooler than previous years, January temperatures were normal and December temperatures were higher than normal.

“I think people’s memories are short-term, so they think the recent weather has been the entire winter,” Murakami said.

Eric Boldt, a meteorologist at the National Weather Service, said the cooler temperatures are primarily associated with an increased number of storms.

“There has been some colder air that is just related to the number of storm systems,” Boldt said. “Some of these storms are coming in from the north and that’s some bringing some colder air with it as well.”

LA has also had over 5 inches of precipitation this month, about 5 inches more than last February. The increased precipitation is likely caused by high-speed winds, known as jet streams, that bring down cool air from the North Pole, Murakami said.

“Sometimes (the jet stream) is positioned so it directs the storms and the cold air south into our state,” Murakami said. “It just happens to be that many times this month, it’s been going through California.”

Boldt said he thinks this year’s increased precipitation is more normal for the LA area than the dry weather of the past few years.

“To see a more normal winter is the first thing people may not understand,” Boldt said. “We should be seeing quite a bit of precipitation and snow in the mountains.”

Gurneet Shaheed, a first-year biochemistry student, said the temperatures in LA are similar to those in his hometown of San Francisco, but the rain is more unpredictable.

“I honestly don’t like it at all,” Shaheed said. “You go out when it’s raining, it stops all of a sudden, and your umbrella’s useless, which you have to carry around all day.”

Boldt said this year’s increase in precipitation does not indicate a trend toward a cooler climate, even if it appears to deviate from the dry weather patterns of previous years.

“If we’re looking at the climate and whether or not this is a long-term trend, we’d have to be looking at years and years of data,” Boldt said. “This is just one above-normal year compared to a lot of other dry years, so it stands out.”

Berg said he thinks the wet winter is a nice change of pace, but it does not indicate LA is shifting from drier to wetter conditions.

Boldt said this level of precipitation may not necessarily bring Southern California out of its drought in the long-term because of how unpredictable the weather can be.

“Southern California is like the stock market when it comes to weather,” Boldt said. “We can have really (good) years, and we can also have really bad years.”

Jisung Park, an assistant professor of environmental health sciences and public policy, said while the cold does not indicate climate change, the unpredictability of the weather does.

“Weather patterns are changing in ways that we’re not used to,” Park said. “That’s certainly consistent with climate change.”

Kelly Schmader, assistant vice chancellor of UCLA Facilities Management, said in an email statement some buildings on campus have flooded in the past few months due to heavy rainfall.

“This (flooding) is not to be unexpected for a campus that is approaching 100 years of age and has more than 30 percent of our buildings over 60 years old,” Schmader said.

Nurit Katz, chief sustainability officer and an executive officer in Facilities Management, said the university will launch a study next month to investigate potential ways of capturing stormwater at various locations on campus as part of UCLA’s efforts to achieve carbon neutrality by 2025.

“The study is going to comprehensively look at the campus, and hopefully within the next five to six years, we’ll be doing some significant capture projects on campus,” Katz said.