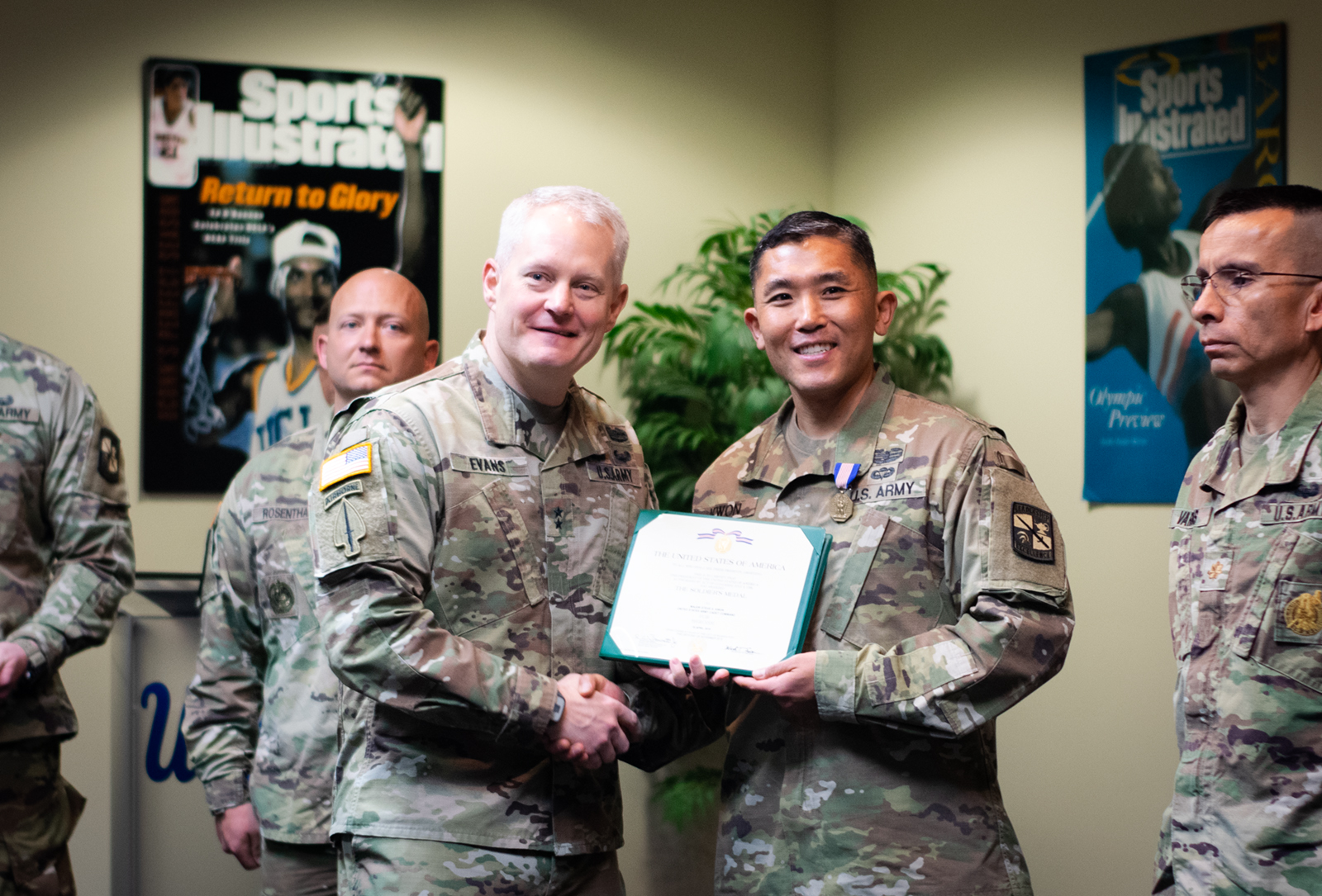 Maj. Steve Kwon, Maj. Tyrone Vargas, Romeo Miguel and Victoria Sanelli were recognized at an award ceremony Wednesday for aiding in the rescue of a trapped motorist in a car crash last year. Members of the department of military science attended the ceremony. (Emily Ng/Daily Bruin)

Maj. Steve Kwon, Maj. Tyrone Vargas, Romeo Miguel and Victoria Sanelli were recognized at an award ceremony Wednesday for aiding in the rescue of a trapped motorist. Members of the UCLA department of military science attended the ceremony.

The four award recipients, along with former Army ROTC faculty Lt. Col. Shannon Stambersky and Sgt. 1st Class Rhu Maggio, were driving back to campus April 30 on the southbound 405 Freeway when they witnessed a truck crash into the center divider, according to a university press release. The crash hurled debris across the freeway and started a fire.

The uniformed faculty helped the driver of a severely battered Honda safely escape his vehicle, while the civilian faculty helped control the chaos of the scene, according to the press release.

Maj. Gen. John Evans, the commanding officer of U.S. Army Cadet Command, presented the award. He said it was humbling to see the UCLA Army ROTC faculty put their lives at risk to help a stranger.

“I think … what’s really special about our service members and army members is their willingness to sacrifice themselves for someone they don’t know,” Evans said. “In combat, you’re just as likely to put yourself at risk for someone you don’t know as someone you do know.”

Kwon, professor and chair of military science at UCLA, received the Soldier’s Medal, the highest honor for heroism outside the battlefield. He said saving the civilians was an instinctive reaction.

“Our army training took over our mind, so we did what we needed to do to execute. This was definitely a team effort,” Kwon said. “I’m just very thankful that we helped the individual.”

Vargas, an assistant adjunct professor of military science, received an Army Commendation Medal. He said he thinks if the ROTC faculty had not rescued the driver, someone else would have.

“The one thing on my mind was to give that person a chance to get out and spend a day with their family,” Vargas said.

Sanelli, UCLA’s Army ROTC manager, received a letter of commendation at the ceremony. She said the uniformed members’ preparedness gave her the confidence to help fight the fire.

“I saw how their training just came into play and made them just ready to act and as a nonmilitary person it helped me to act and know what to do,” Sanelli said.

“It takes a lot of courage to drive on a flaming wreck, and they were helping a stranger,” Lee said. “It takes a lot to step out of your comfort zone like that.”