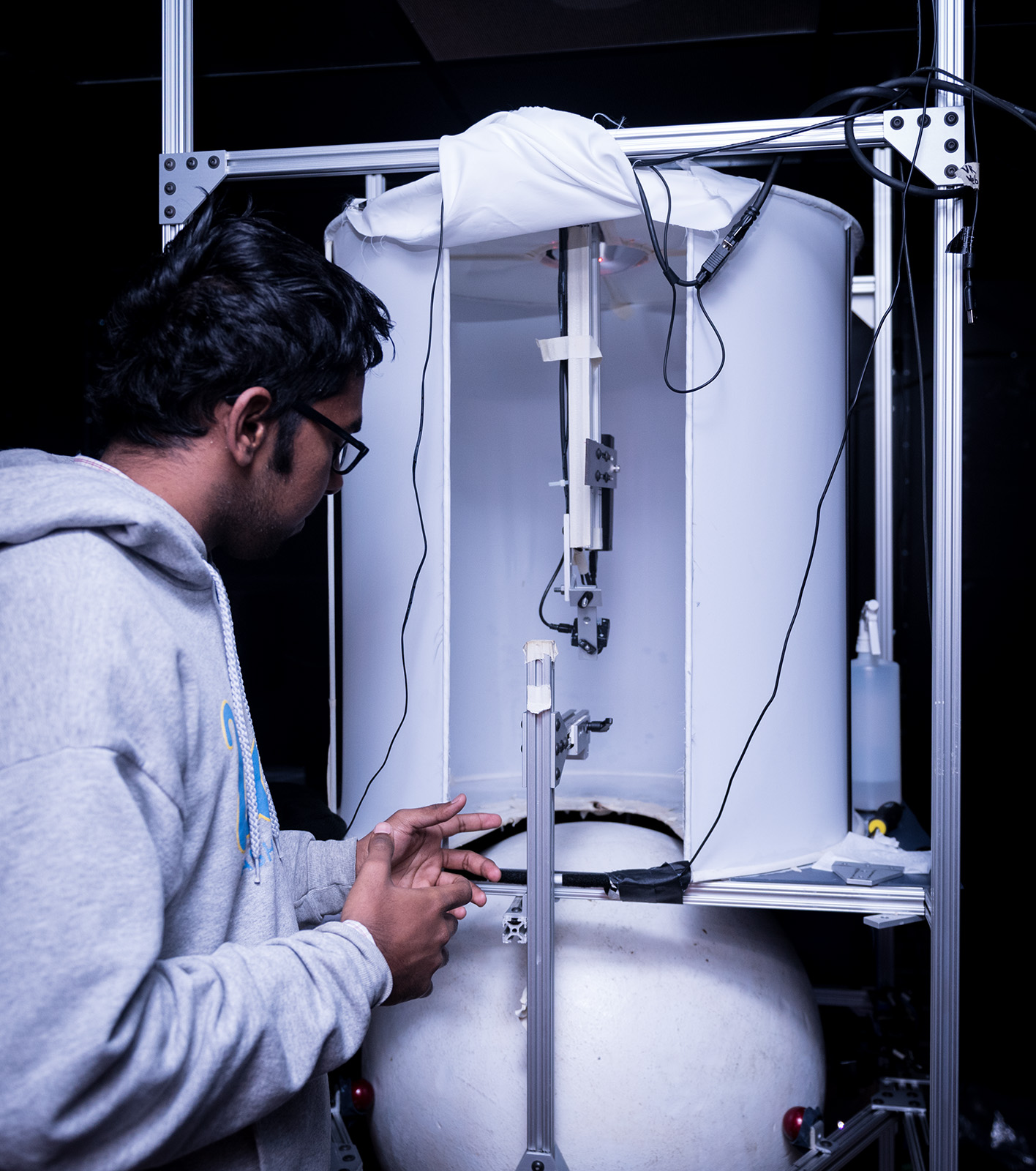 Researchers in the lab of Mayank Mehta, a professor of neurology and neurobiology, placed rats in small cylindrical containers and used a projector to simulate a cubical room with distinct visual patterns on each wall. (Daanish Bhatti/Daily Bruin)

Researchers in the lab of Mayank Mehta, a professor of neurology and neurobiology, placed rats in small cylindrical containers and used a projector to simulate a cubical room with distinct visual patterns on each wall. Rats moved on a spherical treadmill and navigated through the virtual world toward virtual landmarks. Once they reached the landmark, they received a sugar water reward.

The team implanted electrodes in the rats’ brains to record when specific neurons fire at different positions in the room.

Chinmay Purandare, a graduate student in the lab, said rats are still able to move through the virtual world when the neurons do not behave as expected. He said this suggests spatial perception is determined by more than just visual and auditory senses.

Currently, the virtual reality setup is limited to just visual and auditory stimuli. Purandare said he is hoping to work with undergraduate engineering students to include textures and smells in the simulation to better immerse rats in the virtual world.

This improved design will potentially allow researchers to determine whether sensory clues are the sole factors behind spatial perception.

Mehta, head of the research group, said he thinks the research will improve understanding of how the brain maps out space. He also said the findings can be applied to help cure neurological disorders, such as autism, epilepsy and Alzheimer’s disease, because the disorders affect the regions of the brain involved in spatial perception. He said he hopes their discoveries will guide further research in these disorders.

Autistic individuals experience hypersensitivity to changes in visual stimulus, Purandare said. He said neurons related to hypersensitivity don’t respond as harshly in virtual reality as they do in the real world.

He added if researchers can understand how autistic individuals respond to virtual worlds, they may be able to use virtual reality to reduce complications of autism, including visual hypersensitivity.

“Our research shows that these neurons don’t care in VR as they do in the real world,” he said. “We could have (people) wear some goggles that make (them) feel more like (they’re in VR so they’re) not as affected.”

Wesley Smith, a postdoctoral researcher on the project, said he hopes new technology can be implemented to improve the experiment. For example, newer types of electrode implants could record a greater number of neurons for a longer period of time, allowing the researchers to collect more detailed data on the rats’ spatial processing.

Mehta said he is hopeful his discoveries will lead to improved treatment for those with neurological disorders.

“The brain does so many things that we can’t just think about,” he said. “If you can figure it out, you have a chance to figure out how to fix it.”