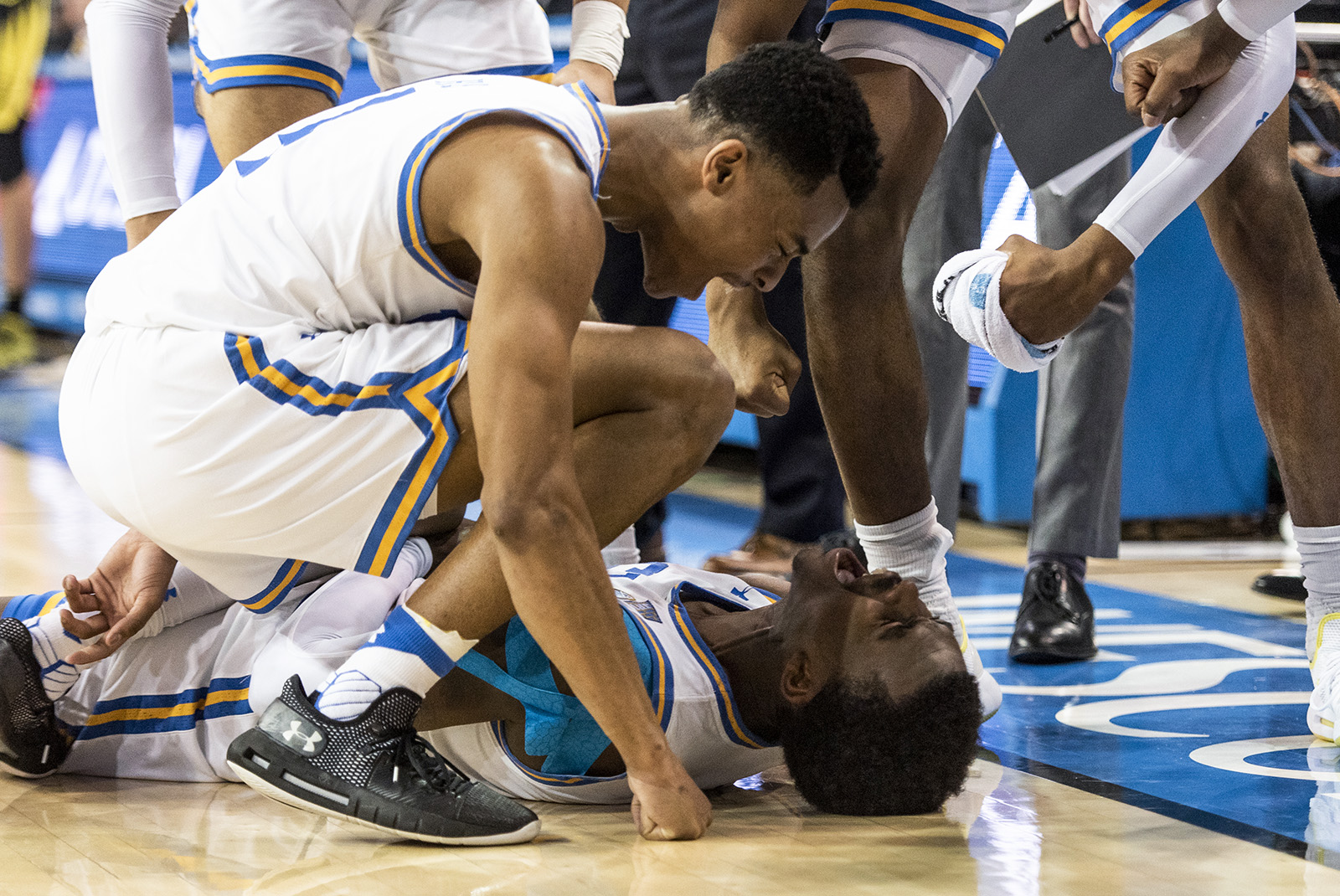 Sophomore guard Jaylen Hands (left) nailed seven 3-pointers to aid UCLA men’s basketball’s comeback effort over Oregon, with all 27 of his points coming in the second half. Fellow sophomore guard Kris Wilkes (right) made three 3s of his own in the second. (Michael Zshornack/Daily Bruin senior staff)

With 13:25 left in the game, Pauley Pavilion got loud.

There wasn’t really a reason why – the Bruins were down by nine and hadn’t been able to stop the Ducks all night.

But then, Oregon picked up a shot clock violation amid the noise, and the building got even louder.

“It felt good,” Hands said. “I have to give the credit to my teammates. They set good screens, (pushed) the ball after rebounds. … (I’m) really proud of my teammates for helping me get that.”

Hands was shooting from well beyond the 3-point line on the majority of his attempts, culminating in a dagger from 30 feet out with 43 seconds left.

Sophomore guard Kris Wilkes picked up 20 points, drilling four triples of his own – three of which came in the second half. Wilkes was smiling and clapping along with the crowd during the Bruins’ big run, pumping up the fans almost every time he went back on defense.

“I always see it on TV, everybody pumps up the crowd and everybody gets hyped,” Wilkes said. “It just felt good to be that guy now.”

The Bruins entered the second half down 44-28, but they outscored the Ducks 62-39 in the second frame.

Freshman center Moses Brown played 14 minutes and scored six points in the first half, but Bartow said limiting Brown to six minutes in the second helped the Bruins flip their 2-3 defensive zone into a 3-2.

Freshman guard Jules Bernard scored a career-high 20 points and went 9-of-11 from the free throw line, just two nights after posting an 8-of-10 mark against Oregon State. Bernard played 18 minutes in the second half and said changing up the defensive set helped his team change the tone of the game.

“Our first half, we didn’t have as much energy on defense,” Bernard said. “Bringing that energy and bringing that fight is something that we needed and we started getting that going, we picked up on that.”

Between Bernard, Hands and Wilkes, the Bruins got 67 points out of their top-three scorers. Their top-six scorers against the Beavers on Thursday all finished with between eight and 14 points.

Oregon had five players score in double-digits, led by forward Paul White’s 18 points. The redshirt senior scored 14 in the first half, but went 2-of-7 from the field and 0-of-4 from long range in the second.

UCLA came back from trailing 19 on Saturday, but in its first meeting with Oregon on Jan. 10, put together a similar run to overcome a 17-point deficit and win in overtime. Wilkes said he and his teammates used that first game as motivation when they were down big again tonight.

“That’s really what we said,” Wilkes said. “We knew for sure that we were going to play hard and come back, and I’m just glad we did that.

The comeback started with 14:53 remaining and the Bruins down by 15. Redshirt junior forward Alex Olesinski – who Bartow said was integral in holding down the back line of the zone defense in the second half – hit a layup, but it was Hands who scored 16 of UCLA’s next 18 points.

During that run, Bartow shed his sports coat and spent the rest of the game jumping, yelling and fist-pumping, something Bernard said was fun to see.

“Bartow was a little crazy on the sideline,” Bernard said. “We just had a lot of energy and when you have energy with such great, talented players, you can do some special things.”

And Bartow said that was exactly what he was trying to do.

“When they’re animated and feeling good, I just like to show them that I’m feeling good too,” Bartow said. “Hopefully, it helps them when they see my enthusiasm and my energy and my passion, but our guys just made incredible plays in the second half.”

The Bruins are now 1 ½  games out of second place and just one game from a top-four seed in the Pac-12 tournament. The win clinched the season sweep over the Ducks, the first time the Bruins have done so since the 2010-2011 season.