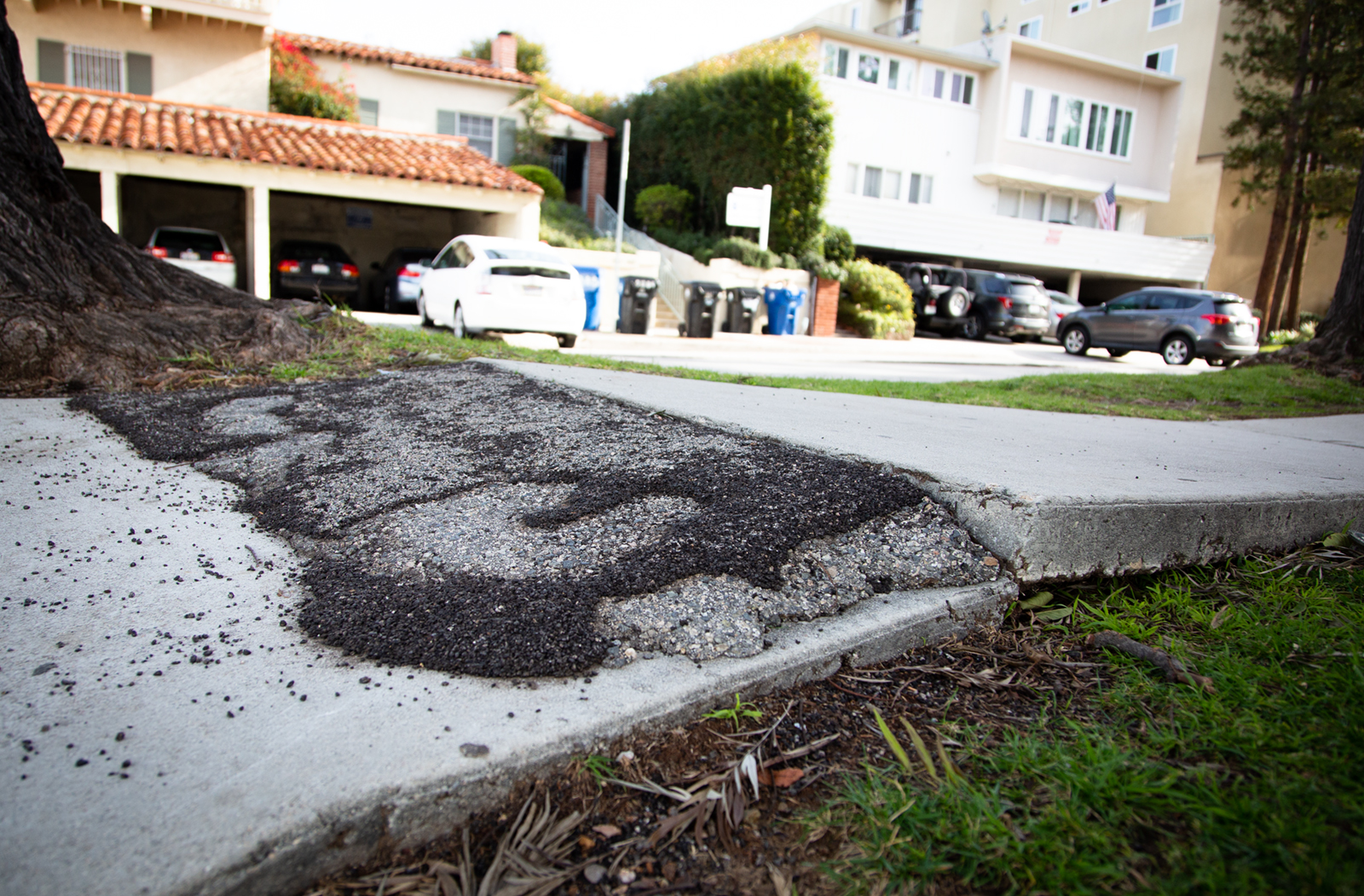 Sidewalks in Westwood are owned and controlled by the City of Los Angeles. Money to pay for repairs comes from assessment fees which all property owners in Westwood must pay to the Westwood Village Improvement Association. (Amy Dixon/Photo editor)

Students said they think sidewalks in Westwood are not being repaired enough.

Sidewalks in Westwood are reconstructed as soon as funds are available, said Andrew Thomas, executive director of the Westwood Village Improvement Association. However, many students said they think the repairs that have been made are still insufficient.

Thomas said sidewalks in Westwood are owned and controlled by the City of Los Angeles. He added that the funding comes from assessment fees all Westwood property owners must pay to the association.

The WVIA, Thomas added, is under contract with the city, which allows the association to issue benefits in the district. Thomas said these benefits include sidewalk cleanings and repairs.

“Every year we have worked with our subcommittee and discussed which locations we would reconstruct next, but it’s all funding-dependent. To date, all the funding comes from our assessment – today it’s all about taxes,” Thomas said. “Everyone who lives in our district pays for special assessment.”

[Related: Pending Program would give portion of parking revenue back to Westwood Village]

Hovhannes Nazaryan, a second-year pre-psychobiology student, said he thinks sidewalks in Westwood are in good condition, but would benefit from minor alterations.

Nazaryan, who has spinal muscular atrophy, uses a motorized chair to commute, and said he believes sidewalks can be improved in order to facilitate navigation for people with disabilities.

“My chair isn’t too wide, but I know there are a lot that are wider. It feels very dangerous and I have to be very careful to not go off the edge,” Nazaryan said. “One thing that I’ve noticed is that a lot of the areas that you use to get onto sidewalks can be very steep, and I can see how that can be a problem.”

Shawn Schwartz, a fourth-year biology and cognitive science student, said he thinks sidewalks around his apartment in Westwood cause an inconvenience when walking to class, especially on rainy days.

“Many of the sidewalks in Westwood near the surrounding apartments are cracked, uplifted by tree roots or flooded every morning because of poor water management systems,” Schwartz said. “I have to walk in the middle of the street for a portion of my daily walk.”

Alondra Serrano, a third-year political science and Chicana and Chicano studies student, said she thinks sidewalks in Westwood are in poor condition, but shouldn’t be considering the high cost of living in the Village.

“Sidewalks are cracked and uneven and it makes it genuinely unsafe for students to walk through some areas without tripping or potentially falling,” Serrano said. “Even if it is just an inconvenience for many students living in and around the area, it is still ridiculous that the price of living in Westwood is so high when the property surrounding is so unkept.”

Thomas said sidewalks in Westwood have been reconstructed at a high rate since 2012 and that the WVIA is doing all it can to make more reconstructions in the future.

“We’ve probably reconstructed around 40,000 square feet,” Thomas said. “We’ve definitely been able to deliver, but more needs to be done to bring sidewalks to a more efficient and productive system.”